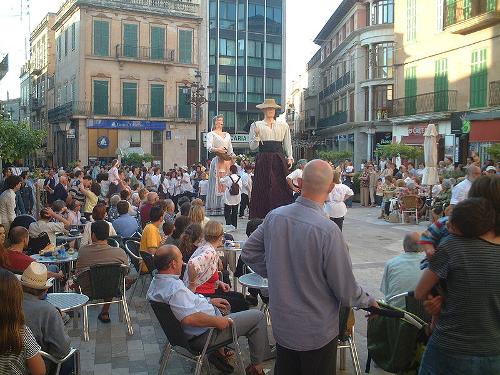 Mallorca had approx. 870,000 inhabitants in 2017, about half of whom live in the capital Palma de Mallorca. The other half is divided among 53 other municipalities. Other large cities are Manacor and Inca. About 40,000 people live along the northern bays in municipalities such as Pollença, Muro and Sa Pobla.

The fertile Es Pla plain inland has about 27,000 inhabitants and many agricultural municipalities. In the El Raiguer region, approximately 52,000 people live in municipalities such as Inca, Campanet, Lloseta and the fast-growing commuter town Marratxí.

About 70,000 people live on the east coast in municipalities such as Manacor, Son Servera and Sant Llorenç. The regions of Calviá and Andratx west of Palma de Mallorca are growing the fastest. In the southern coastal area, approximately 35,000 people live in the municipalities of Santanyí, Ses Salines, Campos and Llucmajor.

Every year Mallorca is overrun by millions of tourists and tens of thousands of seasonal workers from the Spanish mainland, especially from the Andalusia region. In addition, several tens of thousands of Europeans live on Mallorca, mostly because of the beautiful weather. They live here permanently or have a second home.