The Canary Islands (Spanish: Islas Canarias) are located in the Atlantic Ocean west of Africa, at the same height as Morocco. The archipelago consists of seven inhabited main islands and six smaller islands. The main islands are Tenerife, Fuerteventura, Gran Canaria, Lanzarote, La Palma, La Gomera, and El Hierro. Four small rocky islands are: La Graciosa, Montaña Clara, Alegranza and Los Lobos. The Canary Islands are geographically part of Africa, but politically they have belonged to Spain since the 15th century. The archipelago consists of two provinces, under the name: Autonomous Region of the Canary Islands. 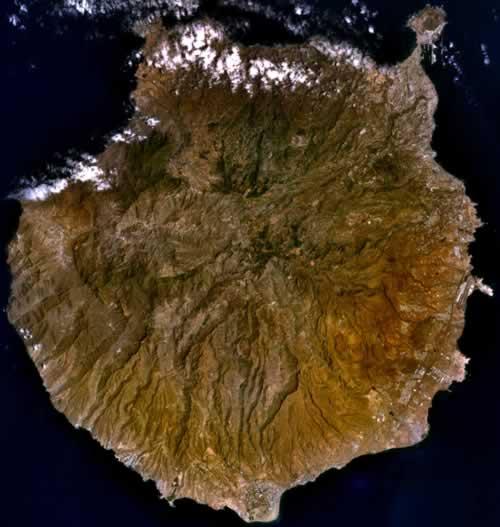 Gran Canaria is of volcanic origin, about 14 million years old, and was formed as a result of eruptions on the ocean floor. Many layers of lava at one point caused the island to rise above water, and also that there are deep troughs between the different islands (up to 3500 meters deep). The volcanoes in Gran Canaria are most likely not working anymore. The last eruption dates from around 1000 years BC. Characteristic of Gran Canaria are the "calderas", volcanoes with a funnel-shaped, collapsed crater and a diameter of more than two kilometers.

Gran Canaria is the third largest island in the Canary Islands after Tenerife and Fuerteventura. The total area of the circular island is 1532 km2. The island measures approximately 55 kilometers from north to south and the maximum width is approximately 49 kilometers.

In the northeast lies the peninsula of La Isleta, which is connected to the main island by the isthmus of Guanarteme. Originally volcanic, the peninsula was once a real island separated by a narrow channel, which was later filled in, from the headland on which the capital, Las Palmas, lies. Morocco is approximately 200 kilometers away and Cádiz, Spain is 1250 kilometers. Gran Canaria has a wide variety of landscapes, such as plains with desert sand, rugged mountains, rocky plateaus, high jagged black cliffs in the west, green fields, volcanoes, sandy beaches, forested valleys and lava fields. The north is much greener and more fertile than the arid and barren south. The remarkable difference is easy to explain. In the center there is a mountain landscape between the north and the south, which means that much more rain falls in the north than in the south.

Gran Canaria is therefore very mountainous, especially inland, with peaks up to almost 2000 meters. The highest peak is the Pozo de las Nievas (1949 meters), located in the central Cumbre mountain range. In the vicinity of this mountain are also other high peaks, such as the Roque Nublo (1813 meters) and the Roque Bentaiga (1412 meters). From the center of the island, 25 ravines ("barrancos") run to the coast, including the Barranco Aldea, Barranco de Fataga, Barranco de Agaete and the Barranco de Mogán.

Southwest of these mountains is the mountainous landscape of Tirajana, where there are several reservoirs or "embalses". In the northwest lies the plateau of Tamadaba (up to 1444 meters high), which is covered with a pine forest. In the east and south there are sandy beaches that can be miles long (total 50 kilometers), while in the west and north the coasts are generally very rocky. Most of the beaches consist of fine-grained yellow sand, but there are also some black-colored sand beaches (volcanic sand) and some pebble beaches. 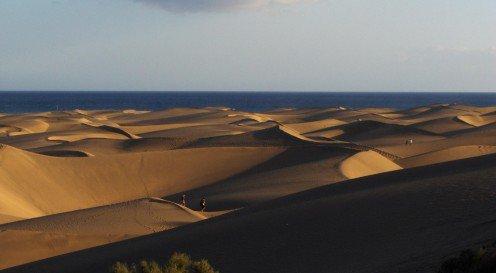 At Maspalomas, in the south, there is a special dune landscape, "Dunas de Maspalomas". Due to the wind and the constant supply of new sand, the dunes are constantly changing shape and place, and are therefore also referred to as the "walking dunes". The dunes "walk" at a rate of 1 meter per year in a westerly direction. The dunes form a 418 hectare sandy plain, which at its widest point penetrates 1.5 kilometers inland.

The dunes are up to twelve meters high, have their own flora and consist almost exclusively of coral and shell lime washed ashore, and therefore not of blown-on sand from the African Sahara. In 1987, the Spanish government decided to protect the "Dunas" as a "Natural Area of National Importance".

To the west, the Dunas border the Chargo de Maspalomas, a pool of brackish and fresh water, where herons, ducks and plovers hibernate.

The rivers on the island are short, largely unnavigable and dry for most of the year.

Until the 14th century Gran Canaria was completely covered with forests. After the introduction of sugar cane cultivation, many forests were cleared, and since the beginning of mass tourism in the 1960s, much forest has been cleared for the many hotels and other tourist facilities. Due to the lack of trees, a great deal of fertile soil material is disappearing due to erosion. Due to the cultivation of the soil, accelerated erosion was and still is. In some places a bare rock bottom is all that remains. To save what can be saved, reforestation is the only remedy, and that is now being emphasized. Reforestation is done with the fast-growing Canary Island pine trees.

Due to tourism, water consumption is still increasing, and that is also causing the necessary problems. The groundwater table has dropped about 100 meters in the last twenty years, causing more than half of the existing water sources to become dry. A real solution is not yet available, although the very expensive extraction of drinking water from seawater offers some relief. The reuse of water for irrigation is also an option.