Morocco can be divided into four natural landscapes. 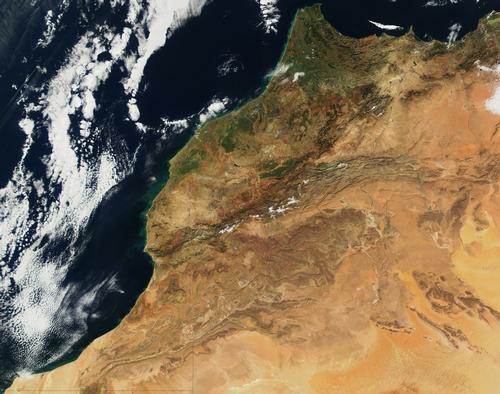 The Rif Mountains are parallel to the Mediterranean coast and include mountain ranges from the Mouth of the Moulouya to the Strait of Gibraltar. The highest peak is the Tidirhine (2456 m). It is not very accessible mountain country with a lot of erosion. The coast of the north of Morocco is rocky.

The Atlas Mountains consist of the Middle Atlas (the Atlas's most northwestern chain) and the High Atlas, which is linked to the southernmost chain, the Anti-Atlas. The High Atlas mainly consists of a series of high plateaus (up to 2000 m), which border the south side of the plain of the Sous and descend in terraces to the wadis in the foreland of the desert. The highest peaks reach almost 4200 meters, with the Tizi-n-Toubal as the highest peak (4167 m). 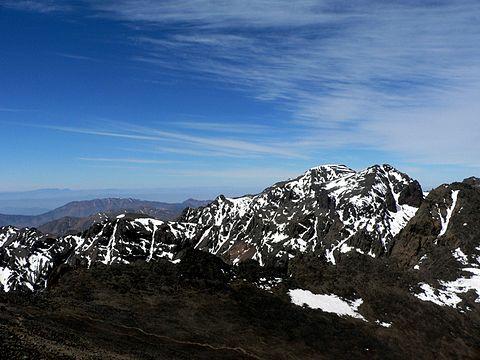 The plateau of Eastern Morocco, a steppe in the rain shadow of the Atlas chains. Here lies the wide valley of the 530 km long Moulouya, which originates in the Middle Atlas and flows into the Mediterranean Sea. Descending from the Atlas Mountains to the southeast is a plateau landscape at an altitude of 1500 to 1600 meters, which is separated from the Sahara by a fault line. The movement along this fault sometimes causes violent earthquakes (destruction of Agadir in 1960).

The area northwest of the Atlas. Three landscape forms can be distinguished: a fertile coastal plain, more inland a dry, steppe-like, less fertile plateau and finally a strip at the foot of the mountains. The latter is rich in water and is a series of orchards, the center of which is the Marrakech oasis.