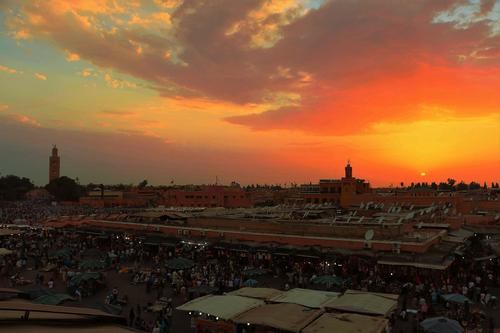 Marrakech is the capital of the south of Morocco and one of the most visited cities in the country. It is a colorful oasis with a rather exotic touch, surrounded by 16 km of ocher yellow city walls. Marrakech has a beautiful souq (market). Marrakech's character has remained unchanged for over 1,000 years. There are countless cafes, palaces, mosques and kasbahs spread across the medina, and the center of Djemaa El Fna Square is very special. Here you will see snake charmers, storytellers and many food stalls.

Located in North Africa in southwestern Morocco, Marrakech is a large and important city with more than a million inhabitants. The city serves as the capital of the region and is located near the scenic Atlas Mountains. Marrakech can be roughly divided into two parts: the historic medina and the Ville Nouvelle (New City), both of which are similar in size. The Ville Nouvelle includes a number of attractive neighborhoods, such as the Hivernage and Gueliz. The medina is one of the most picturesque in Morocco. 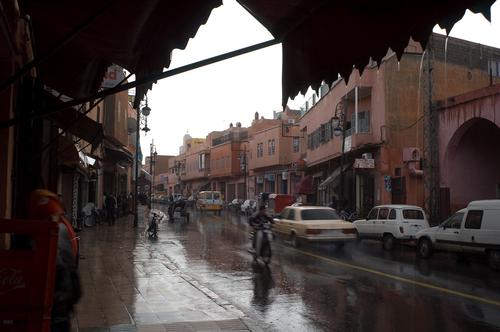 Rain in the winter in MarrakechPhoto: Lars Plougmann (CC BY-SA 2.0) no changes made

The climate of Marrakech is quite attractive all year round, with a lot of sun to enjoy. However, the weather in Marrakech can be quite changeable because although there is usually a lot of sun during the winter months, the chance of rain increases at this time of year. The temperatures are at their lowest in January and February, but they still average 18 ° or 19 ° C, at night it can feel very cold and a jacket will definitely be needed. As you can expect, it is considerably warmer in summer with temperatures from over 30 ° C to even 37 ° C.

As one of Morocco's imperial cities, Marrakech has a history that ranks among the most fascinating in North Africa. Dozens of Berber villages are not far from today's city. These have changed little and date from the ancient Roman period. The Berbers have lived in the area of modern-day Morocco for thousands of years. This was the most southwestern territory of the Roman Empire.

After the Roman Empire, the people of Marrakech were converted to Islam and the people fought against the Spanish to defend their religion. Many of the city's beautiful tiles and architectural structures date back to the Almoravid era. The next group that ruled modern-day Marrakech was the Almohads, who built the beautiful Koutoubia mosque.

During the 7th and 8th centuries, the area of Marrakech was home to one of the world's most advanced and sophisticated societies. In the year of 1062, a sultan named Youssef Ben Tachfine officially declared Marrakech an imperial city with surrounding defensive walls. These colored walls have 9 majestic gates and about 200 towers. At the height of its existence, Marrakech eventually became the capital of an empire that stretched as far south as Senegal and stretched east to Algiers.

The Arab chapter in Marrakesh's history began in the mid-16th century, when the wealthy Saadians controlled the city and united Morocco during their reign, which lasted from 1554 to 1603. Many Saadians are buried here in a beautiful mausoleum, with fine Islamic art and spectacular cedar ceilings in the Kasbah of Marrakech. The current ruling family, the Alevis, first came to power in 1659. 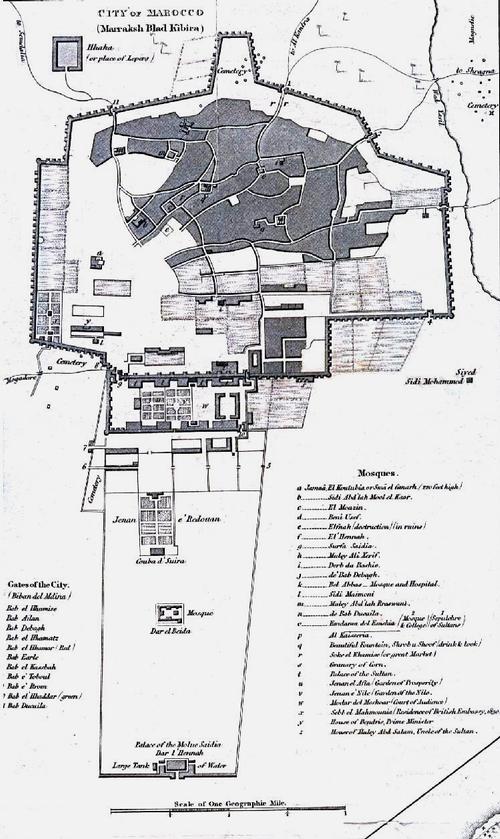 Morocco became an official French protectorate through the Treaty of Fez in 1912, and a growing number of European-style hotels have popped up all over Marrakech, the most famous of which is the imposing Hotel Mamounia. The city was modernized and streamlined. The modern neighborhood of Gueliz, now home to numerous shops and restaurant chains, was created shortly before Morocco became fully independent from France in 1956.

The atmosphere of Marrakech lies within the city walls with the unique shops and narrow alleys. The old medina district is home to the huge soukh and one of Africa's busiest squares, Djemaa El Fna square. 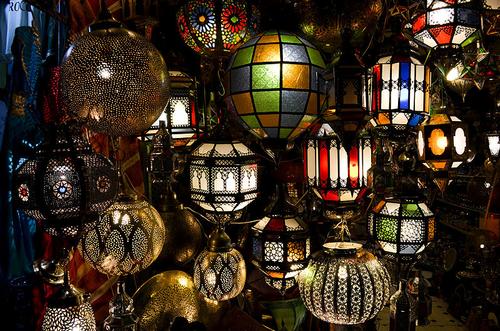 Known as the Pink City, near the High Atlas Mountains in North Africa, Marrakech is a rich cultural mishmash of snake charmers, belly dancers and alluring tourist attractions. Marrakech attracts many visitors who are fascinated by colonial architecture, huge mosques and busy squares and markets. One of the main tourist attractions in Marrakech is the El Badi Palace with 360 rooms. This 16th-century masterpiece is located in the lively Djemaa El Fna square. There are also many gardens in the city to escape the heat and noise. The orchards of the Agdal Garden are very refreshing. Below are some of the major sites of Marrakech described. 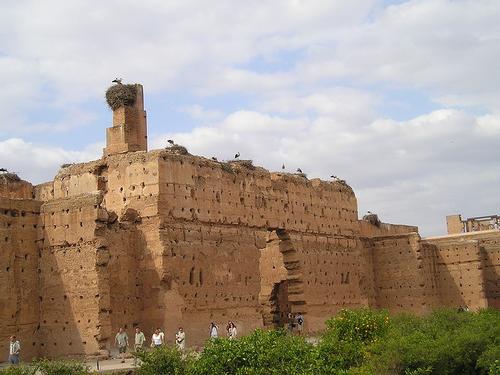 The El Badi Palace is a large 16th-century palace with beautifully decorated rooms complete with gold, ivory and marble. Unfortunately, thieves stole valuables from the rooms after Meknes became the capital in the late 17th century. However, the ruins are worth a visit, and the annual national festival is a major event that draws crowds of visitors in July. 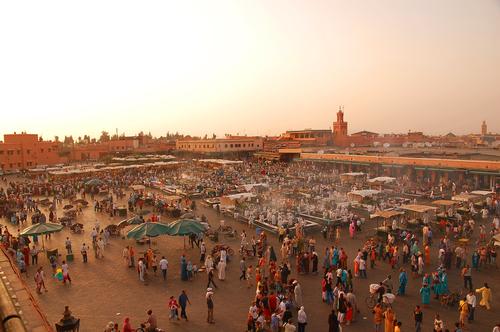 Djemaa el Fna is a bustling square in the heart of Marrakech that comes alive at night. The square is the central and main tourist attraction in the old city (Medina district) and is surrounded by hotels and gardens. Stalls mainly sell food and drinks during the day (such as orange juice), while at night the place is occupied by musicians, dancers, acrobats and snake charmers and of course you can also enjoy delicious food there. 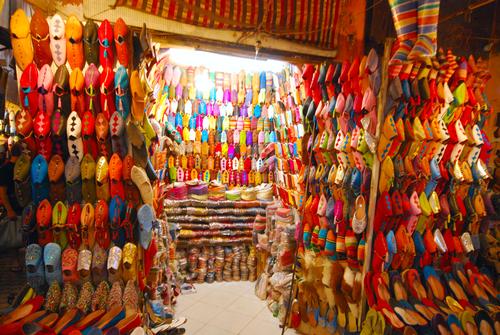 Souks are traditional North African markets and Marrakech is overloaded with them. In the lively souks of the city you will find fine leather goods and hammocks, souvenirs and food. The market next to Place Jema El Fna is one of the best in the city, offering all sorts of things on offer, but you have to negotiate hard. 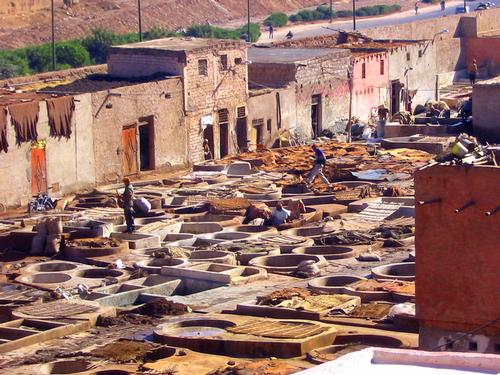 If you are interested in seeing how skins are tanned, take a look at Marrakech's tanneries. The tanneries show processes that have not changed much over the centuries. Dyes used to come from exotic products such as pigeon droppings and pomegranates, but today they are mainly chemical based and the products are dyed by local craftsmen. 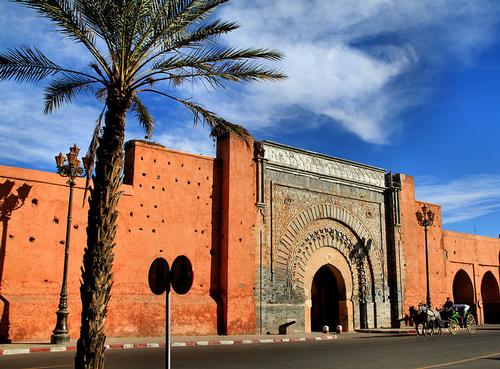 The walls of Marrakech date from the Middle Ages and are still a major attraction. They are well preserved and it is easy to imagine how they protected the medina with its palaces and mansions. The 10-meter high ramparts served to keep out anyone who did not live in the city and surround Marrakech with a length of 16 kilometers. The Bab Agnaou is one of the 20 gates that protected the city. This early stone monument is one of the oldest in the city and was built in the 12th century. The fine masonry changes color all day, depending on the position of the sun and the heat. 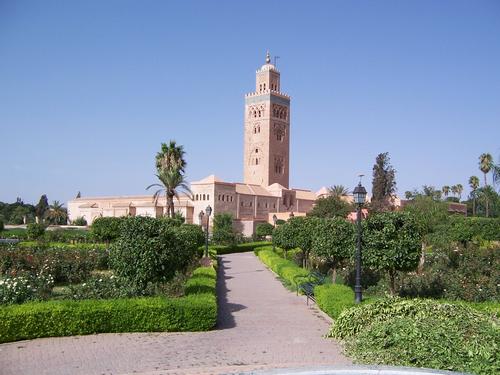 One of the most recognizable monuments of Marrakech is the Koutoubia Mosque. The mosque has an imposing minaret that towers over the rest of the city and is surrounded by well-kept gardens. The structure dates from the 12th century and is beautifully illuminated at night. Unfortunately, the mosque is not accessible to non-Muslims. The minaret is almost 70 meters high and visible from most of the city.

One of Marrakech's more shadowy attractions are the Saadian tombs, which may not be suitable for younger children. There are more than 100 graves here, many of which are decorated with elaborate mosaics. The building itself is beautiful and has been kept upright by countless pillars. Dozens of members of the Saadian royal family are buried here, the graves date from the late 16th century and were actually discovered only in 1917. Majorelle Garden MarrakechPhoto: Rogier at the english langage wikipedia CC 3.0 no changes made

If you want to escape the noise and chaos of the markets and traffic of Marrakech, go to the beautiful Majorelle Gardens. These tranquil gardens were the brainchild of French painter Louis Majorelle and were created in 1924. They feature numerous beautiful plants and trees, as well as several peaceful ponds. 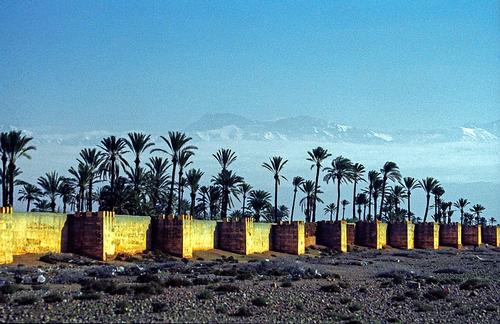 Another peaceful part of chaotic Marrakech is the Agdal Garden (Jardin de l'Aguedal), which can be found south of the city. It is enjoyable in every way, with beautiful orchards, swimming pools and a large lagoon. Olive, pomegranate, fig and orange grow here and the entire garden is surrounded by mud walls.