The north of Morocco has a typical Mediterranean plant growth, including cork oaks, which is strongly influenced by humans and animals. To the southwest, plant growth takes on a more tropical African appearance due to the appearance of cactus-like Acacia species.

In the mountains there is alpha grass on the high plains and forest remains on the slopes. Common trees are the cork oak, the argania tree (recognizable because goats often climb it) and the thuja tree, this tree has beautiful large roots and is suitable for furniture processing. 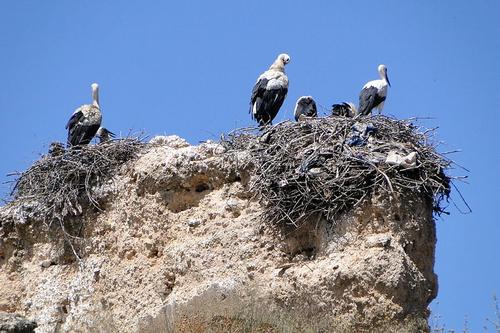 Common animals in Morocco are storks, donkeys and sheep. Desert animals such as snakes and camels are found in the south. The animal world has both a European and an African character. The North African Berber or Atlas Lion has been completely eradicated in the twenties of the 20th century, as has the North African hartebeast (which disappeared before) and the Atlas deer a form of the red deer. Only a few types of gazelles still exist. Like the panther and the cheetah, they are almost extinct in Morocco. The only monkey, the magot, has also become rare, mainly due to the destruction of the forests. Hunting and nature conservation are regulated by law, yet poaching by nomads on the northern border of the Sahara is a problem. A lot of fish can be caught in the coastal waters of Morocco.