Spain (officially: Reino de España, = Kingdom of Spain), is a kingdom in Southwestern Europe and is located on the Iberian Peninsula sharing it with Portugal. The total area of Spain is 505,782 km2, including the Balearic Islands, the Pityusic Islands and the Canary Islands. Spain thus takes up more than four fifths of the Iberian Peninsula. Spain is the fourth largest country in Europe after Russia, France and Ukraine. 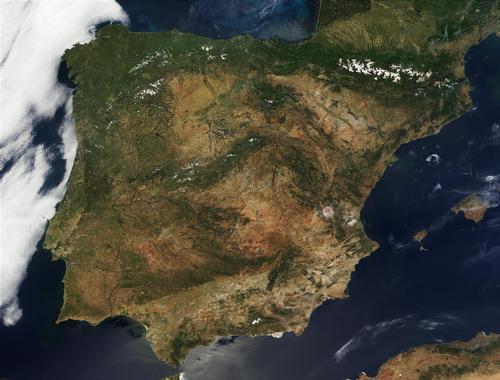 Spain is bordered to the north by Andorra (64 km) and France (623 km), to the west by Portugal (1214 km), and to the south by Gibraltar (1.2 km). The total coastline is 4964 kilometers. Spain largely has natural borders: mountains, coast and rivers.

The Balearic Islands consist of several islands, including the famous holiday destinations Mallorca, Menorca, Ibiza and Formentera. The thirteen Canary Islands lie off the coast of Morocco. They are of volcanic origin and the most famous islands are the holiday destinations Tenerife, Gran Canaria, La Palma, Gomera, Fuerteventura and Lanzarote.

Spain also has two more enclaves in Morocco, Melilla and Ceuta, which acquired limited autonomy in 1995.

After Switzerland, Spain is the country with the highest average altitude in Europe: an average of 660 meters above sea level. Only 11% is lower than 200 meters and 42% is higher than 1200 meters; Madrid (667 m) is, after Andorra laVella of Andorra (approx. 1050 m), the highest capital in Europe.

The central landscape of Spain is the Meseta, a very vast plateau, which is split in two by the granite-rich Central System (Cordillera Central; 600 kilometers long): the Submeseta Norte and the Submeseta Sur, also known as Old Castile and New Castile.

The southern boundary is formed by the Sierra Morena, the north-eastern boundary by the younger Iberian System (Systema Ibérico), which borders the young Ebro basin. The Ebro breaks in the lower reaches through the Catalan Mountains along the coast. The Pyrenees, with peaks above 3000 m (highest peak, Pico de Aneto, 3404 m), are quite wide in the east and get narrower to the west.

This connects to the Asturian-Cantabrian mountains (highest peak Picos de Europa, 2648 km) with the Galician massif. To the southeast lies the Andalusian mountain range, also called the Betische Cordillera, which stretches from Gibraltar, and in fact extends to the Balearic Islands. The highest part of this young mountain range is formed by the Sierra Nevada with Mulhacén (3481 meters) as the highest peak on the Spanish mainland.

It is remarkable that the highest peak on Spanish territory is the Pico de Teide on the Canary Island of Tenerife (3707 meters). 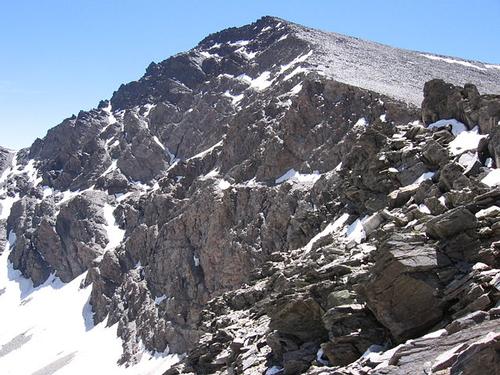 North side of Mulhacén, highest mountain on the Spanish mainlandPhoto: Carlos Serra CC 3.0 Unported no changes made

At the foot of the many mountain ranges, there are just as many landscapes, such as the green valleys in the north, the desert areas of Extremadura, the rice fields of the Levante, the olive and apple orchards of Andalusia, the palm forest of Elche in Alicante and many rocky shores. The major rivers Duero, Tajo (Tagus) and Guadiana follow the west-sloping Meseta and flow, like the Guadalquivir, which originates in the Andalusian Mountains, west to south-west towards the Atlantic Ocean. The Duero flows in the northern part of the Meseta (895 km) and the Tajo (1007 km) in the southern part. The capital Madrid lies between these two rivers. The Ebro, which originates in the Cantabrian Mountains and flows in a southeasterly direction, is the only major river that flows to the Mediterranean.

In general, the Spanish rivers have a very irregular water supply with a minimal summer level and are therefore of little significance to shipping. Only the Guadalquivir is navigable downstream from Seville. The Ebro and Duero often contain a lot of water but are unusable for shipping due to the many height differences.

The Ebro and Guadalquivir Basins are used for irrigation and the Tajo is used for power generation.

Due to the strong soil erosion, the rivers generally transport a lot of sediment, as a result of which deltas have been formed near the Ebro and the Guadalquivir, among others. In Galicia in the far north-east, the rivers have wide estuaries.

The Guadiana is special by its sudden disappearing underground and rising above the ground kilometers further. Other major rivers not yet mentioned are the Júcar and the Segura.