The autonomous region of Andalusia (Spanish: Comunidad Autónoma Andalucía) is located in the south of Spain. The total area of Andalusia is 87,268 km2, making the region one of the largest in Spain. The touristically important coast is 861 km long, of which the coastal province of Almería accounts for 200 km, Cádiz 260 km, Granada 121 km, Huelva 120 km and Málaga 160 km. The provinces of Córdoba, Jaén and Seville are inland and have to do without a coastline.
Andalusia is bordered in the north by the provinces of Castilla La Mancha and Extremadura, in the south-east by the Mediterranean Sea, in the south-west by the Atlantic Ocean (including the Gulf of Cadiz) and in the west by Portugal. Andalusia is separated from Africa and Morocco by the Strait of Gibraltar, from the southernmost point of mainland Europe, Tarifa, it is only 13 km from the North African coast. On clear days, the North African coast can be seen from Balcón de Europa, a 23 meter high cliff in the town of Nerja. 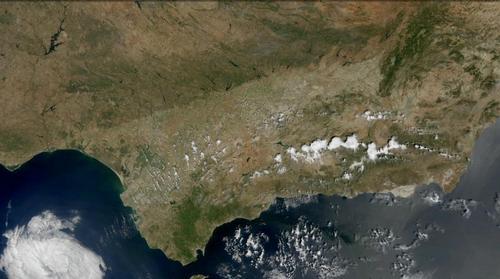 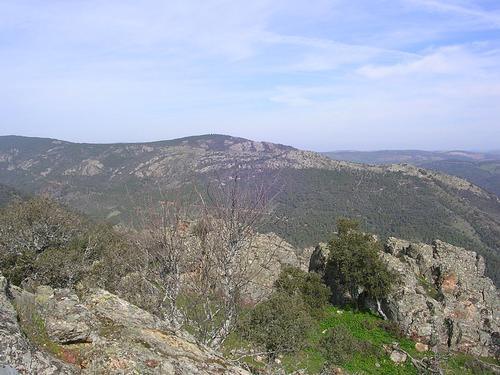 The landscape of Andalusia is largely defined by two mighty mountain ranges, the Sierra Morena in the north and the Cordilleras Béticas in the south, with in between the enormous plain of the river Guadalquivir, the so-called Andalusian basin, which covers about 65% of the entire Andalusia region. For example, the capital Seville is only nine meters above sea level. The rest of Andalusia is therefore generally mountainous, of which approximately 50% is higher than 600 meters above sea level.
The Sierra Morena is actually a southern offshoot of the Castillian plateau and separates the provinces of Extremadura and Andalusiaafrom each other. It is one of the largest systems of mountain ranges in Spain and runs for a length of about 450 km from east to west across the south of the Iberian Peninsula, all the way to Portugal. The average height of the Sierra Morena is not spectacular, because it is between 600 and 1300 meters. The highest peak of the Sierra Morena is the Buñuela 1332 meters, other high peaks are the Corral de Borros (1312 m) and the Cerro de la Estrella (1298 m). Some of the about 25 mountain ranges that belong to the Sierra Morena are Sierra Madrona, Sierra Norte de Sevilla, Sierra de Aracena, Sierra de Andujar, Sierra Grande de Hornachos and Sierra de Peñaladrones.
South of the Sierra Morena and north of the Cordilleras Béticas is the low plain of the Guadalquivir, a fertile, agricultural and therefore densely populated area with cities such as Córdoba and Seville. The black soil is irrigated by the tributaries of the Guadalquivir. The largely unnavigable Guadalquivir has its source in the Sierra de Cazorla at 1600 meters, is 670 km long and runs entirely through Andalusia. The (short) tributaries are the Viar, Bembézar and Guadiato from the Sierra Morena and the Guadania Menor and the Genil from the Cordilleras Béticas. Before the Guadalquivir flows into the Atlantic Ocean through the Doñana swamp area, the river is navigable. Close to the source of the Río Guadalquivir in the north-east of Andalusia lies the up to 2000 meters high Sierra de Cazorla with the beautiful Parque Natural de Cazorla y Segura (2000 km2), a UNESCO biosphere reserve with swamps, gorges, waterfalls, coniferous forests. Separated by river valleys and gorges, there are also the mountain ridges Sierra de Pozo, Sierra de la Cabrilla and Sierra de Segura. The highest mountain in this area is Empenada (2107 m). 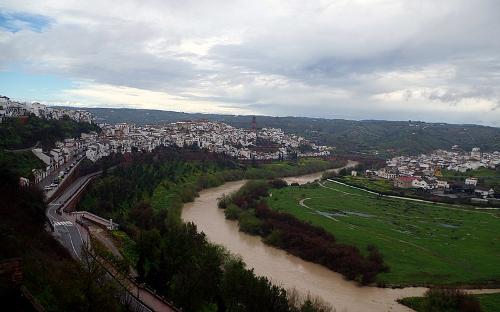 The Cordilleras Béticas is located in Eastern Andalusia between the low plains of the Guadalquivir and the coast. This mountain range consists of two mountain ranges, the Cordillera Subbética in the north and the Cordillera Penibética in the south of the autonomous region. Between these two mountain ranges lies the Depresión Penibética valley, which flows into the lowlands of Granada, including the Monte Veleta (3392 m) and the highest mountain in the Iberian peninsula, Mulhacén (3481 m). Together with the Alcázaba (3371 m) they form the so-called 'Los Tresmiles'. The Sierra Nevada covers an area of approximately 170,000 hectares, of which about half has served as a national park since 1999.
The Sierra Nevada is the highest mountain range in Europe after the Alps and at an altitude of 2100 meters southernmost ski resort in Europe, Solynieve. South of the Sierra Nevada and just north of the coast, stretching across the provinces of Granada and Almería, lies Las Alpujarras, a 70 km long complex of river valleys, steep mountainsides and wooded valleys, but also with the highest village Spain, Trevélez, at an altitude of 1,476 meters. Mulhacén, the highest mountain in the Iberian PeninsulaPhoto: Otto CC 3.0 Unported no changes made

Tourists and retirees visit in large numbers the approximately 900 km long coast of Andalusia. The coastal plain of Andalusia varies in width from about 50 km in the west to practically zero in some parts of the provinces of Granada and Almería on the Strait of Gibraltar. Much more popular, because the climate is better here, are the beaches of Marbella on the Costa del Sol. Near Granada lies the rocky Costa Tropical and in the south-east of Andalusiaalie the quiet beaches of the Costa de Almería.

In the southeastern province of Almería lies the only (semi) desert in Europe, the Desierto de Tabernas, in fact a steppe-like enclosed by mountain ranges. an almost treeless area of reddish hills, ravines and riverbeds and with its own plant and animal world. In this region, which is reminiscent of a strange kind of lunar landscape, there is also a karst area with thousands of caves, which were created in the limestone by water erosion. In the Santiago district of the town of Guadix, more than a thousand fully furnished cave houses and even hotels have been built in the soft sandstone. In addition to the aforementioned rivers, many other rivers, of which the so-called 'ramblas', beds of dried-up rivers, only fill up after heavy rainfall. In the Atlantic Ocean flow the Río Guadalete (157 km), Río Guadania (744 km), Río Odiel (150 km) and Río Tinto (100 km), in the Mediterranean Sea the Río Adra (49 km), Río Almanzora (90 km), Río Almería (67 km), Río Guadalfeo (71 km), Río Guadalhorce (166 km) and Río Guadiaro ( 183 km).
The Laguna de Fuente de Piedra (approx. 13 km2) is, after the Laguna de Gallocanta (approx. 14.6 km2) in the province of Aragón south of the city of Zaragoza, the largest Spain's inland lagoon and the largest lake in Andalusia.

The Costa de Luz, the 'coast of light', is generally characterized by a landscape of dunes, bays, cliffs, long, wide but quiet sandy beaches, vineyards and coniferous forests. The Costa de Luz, the southern part of which lies in the province of Cádiz, and the northern part in the province of Huelva (Huelva de Luz), stretches from Tarifa, the southernmost point of Spain, to the border with Portugal in the west of Andalusia. The Guadalquivir, which flows through the Campiña Baetica lowland, flows into the Atlantic Ocean and feeds the largest protected wetland in Europe, the Parque Nacional Coto de Doñana. Along the river you will find marshes, lagoons and salt pans, in the national park cliffs, beaches and dunes along the kust and pine forests more to the north. On the northern Costa de la Luz, there are over 100 km of beautiful white sandy beaches, which are also very quiet. The most famous protected area here is Marismas de Odiel.
The hinterland of the Costa de la Luz is partly dominated by enormous farmlands where come the best bulls for bullfighting from and the Andalusian horse is bred. In the province of Cádiz, between Tarifa and Arcos de la Frontera in the mountainous area of Los Alcornocales, there are many cork oak plantations or 'montadas'. La Gruta de las Maravillas in the province of Huelva near the town of Aracena, is one of the largest cave systems in Europe (1.2 km of cave halls and corridors), including twelve caves, six underground lakes and limestone formations in beautiful colors. 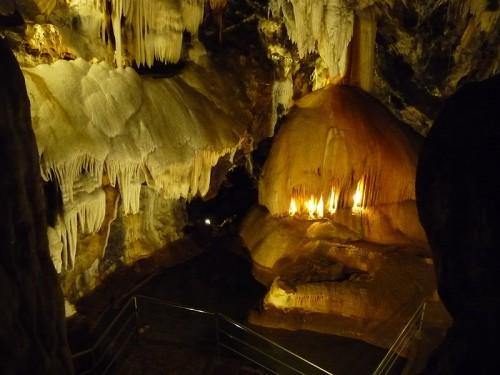 The Costa del Sol is best known for its mass tourism and cities such as Málaga, Marbella, Fuengirola, Torremolinos, Almería, Ronda, Antequera and Nerja. El Torcal is a nature reserve and karst stone mountains of 1000-1200 meters high where many thousands of years wind and rain have had free reign and created the most fantastic shapes.
From Nerja the coastal mountains almost run into the sea and large wide beaches give way to bays with small sandy beaches. This rocky coastal area of approx. 100 kilometers, running from La Herradura and La Rabitá, is also called the Costa Tropical and the rocks and cliffs are excellent for diving activities, especially at the town of La Herradura. The karst cave Cueva de Nerja only discovered in 1959 is home to the world's thickest stalactite, a 32 m high column in the Sala del Cataclismo. Many archaeological finds have also been made in this cave.

The Costa de Almería, running from Adra to Mojácar and Almería, is the most (south) eastern Costa of Andalusiaand its protected location in the foothills of the Sierra Nevada makes it the driest, warmest and sunniest spot in all of Andalusia. The arid landscape of this semi-desert is not very beautiful, but it is extremely suitable for sunny holidays and for the placement of plastic horticultural greenhouses, which has happened on a large scale. The Cabo de Gata-Níjar nature reserve is dominated by the 500 meter high Sierra de Cabo de Gata. The coast, formed by volcanic eruptions and solidified lava, is a motley collection of beaches, bays, jagged rock formations, dunes, cliffs and salt pans.