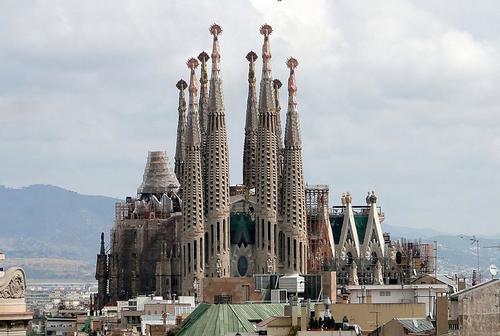 From the year 394, when Spain was still part of the Roman Empire, Roman Catholicism has been the state religion. It was Emperor Theodosius who took care of this. In 589 this status was reaffirmed by the Visigoth king Recaredo. In 711 Spain was conquered by the Moors and Islam was the main religion.
It was not until the early seventeenth century that the Catholic Church regained its powerful position and a close cooperation between church and state developed. In 1931, at the time of the Second Republic, this undesirable situation came to an end. The church had not become very popular in all those centuries and this led to the death of about 6,000 clergymen in the Spanish Civil War. It was therefore not surprising that the church developed close ties with the Franco regime. Franco proclaimed Roman Catholicism the state religion in 1939. Thus, church life was woven throughout society. It was very remarkable that the church was only allowed to appoint bishops on the recommendation of Franco. This close collaboration with the dictator made the church very unpopular among the population again. Although the Second Vatican Council demanded the separation of state and church, Franco refused to comply.
It was only after Franco's death that the 1978 constitution reintroduced the separation of church and state and guaranteed freedom of religion. All this on the initiative of the newly appointed King Juan Carlos.

The Spanish population is approximately 95% Roman Catholic. The Roman Catholic Church comprises a total of 14 archdioceses and 53 dioceses. Together they form the eleven church provinces. The Archdioceses of Barcelona and Madrid - Alcaláfall directly under the Holy See of Rome. The primate of Spain is the Archbishop of Toledo. Approx. 870,000 people profess a faith other than Roman Catholicism, including Muslims (approx. 500,000), Jews and Protestants (approx. 70,000).

In Andalusia 87% of the population is Catholic, 2% Muslim, 1% Protestant Christian, 8% without religion and the remaining 2% belongs to a variety of different denominations. 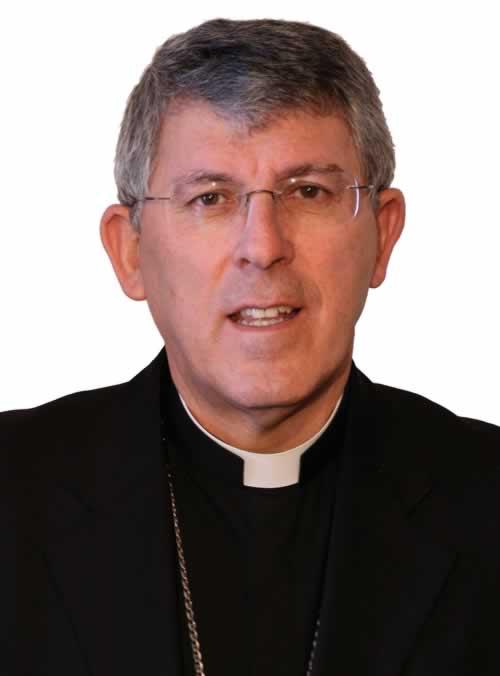 Involvement with the church has declined sharply in recent decades. More than 4 million people say they no longer adhere to any religion. The number of parish clergy, monks and nuns is also declining sharply. Despite this decline, there is still massive participation in the important religious festivals. It may be clear that it is nowadays more and more tradition rather than religious belief.
In the countryside there is much participation in so-called "romerías", pilgrimages to the shrine of a certain saint or to much revered statues of Mary or Jesus. One of the best known is the Pentecostal romeríaxis of the western Andalusian Huelva, La Virgen del Rocío. Hundreds of thousands of pilgrims still come here every year.

Religious buildings and activities in Andalusia

SEVILLE
-Cathedral of Santa María de la Sede: The gigantic cathedral of Seville, a UNESCO World Heritage Site, is officially the largest Gothic church in the world by volume, measuring 126 meters in length and width of 83 meters. After St. Peter in the Vatican and St. Paul's in London, Seville Cathedral is the largest Christian church in the world.
The cathedral stands on the site of the beautiful 12th century Almohad Mosque. After the conquest of Seville by the Christians in 1248, the mosque was used as a church until 1401. Then the mosque was demolished and the cathedral built. Of the mosque, apart from the Patio de los Naranjos, only the 104-meter high brick minaret, the 'Giralda', a masterpiece of Almohadic art, remains. Beautiful is the main chapel Capilla Mayor with an even more beautiful altar made by the Flemish woodcarver Pieter Dancart in 1482, with the 15th century 'retablo', the largest altarpiece in the world. In the Puerta de los Príncipes, a monumental tomb, lie, howwell the scholars are not quite in agreement on this, the remains of Christopher Columbus and some relatives.
Other important churches in Seville are the Basílica de La Macarena, built in 1949 by Gómez Millán, with a beautiful statue of the Virgin Mary and the Iglesia de San Luis de Los Franceses, a superb example of Sevillian neo-baroque architecture. The Iglesia de Santa Ana from 1280 is the oldest church in Seville. The former Carthusian monastery now includes the Andalusian Center for Contemporary Art and the International University of Andalusia established. 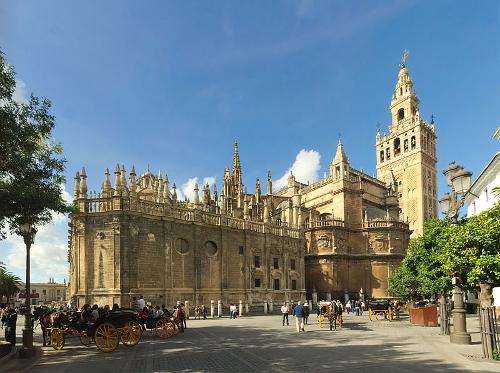 Cathedral of Seville with on the right the former minaret 'Giralda' Photo: Ingo Mehling CC 4.0 International no changes made

CÁDIZ
-Cádiz Catedral or 'Catedral Nueva': this large Baroque-Neoclassical cathedral, the only completed Baroque church in Spain, with a dome of golden azulejos (Portuguese/Andalusian ceramic tiles), is, according to Spanish standards, soberly executed. It was decided to start construction as early as 1716, but the project was not completed until 1848, which is why the facade is built in neoclassical style. Next to the cathedral is the Iglesia de Santa Cruz or 'Catedral Viejo', a Gothic church from 1260 with a 17th century interior. Two special churches are the Oratorio de la Santa Cueva with frescoes by Francisco de Goya and the Oratorio de San Felipe Neri, a baroque church where the first liberal constitution was signed by the Parliament of Spain in 1812.

MÁLAGA
-Catedral de la Encarnación: The construction of the cathedral of Málaga started in 1528 and due to many problems the project was not 'completed' until two centuries later and that resulted, as with many other churches in Andalusia, in a mix of styles: Baroque, Gothic and especially Renaissance. Costs got so out of hand that construction was stopped in 1782. One of the bell towers would never be finished again. 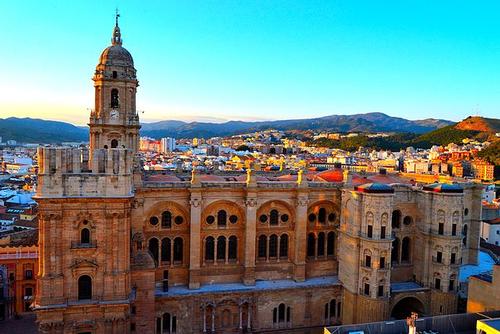 BENALMÁDENA
-The largest Buddhist stupa in Europe is located in the coastal town of Benalmádena, near Torremolinos. The 33 meter high stupa, inaugurated in 2003 and built by the Buddhist community of Benalmádena, Lopon Tsechu Rinpoche, is open to visitors and, in addition to exhibitions related to Buddhism, meditative sessions and lectures on Buddhism are held. 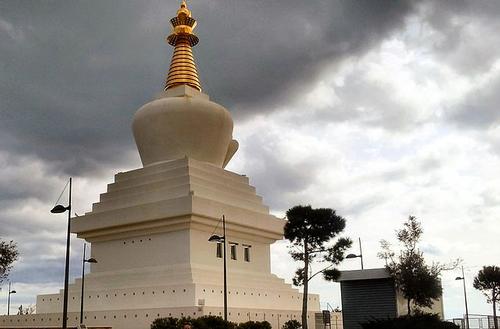 Stupa of BenalmádenaPhoto: Brian Milnes CC 3.0 Unported no changes made

CÓRDOBA
-Mezquita or Great Mosque: church built in AD 600 on the foundations of the Christian Visigothic church of Saint Vincent. In 785, Emir Abd ar-Rahman bought the Christian church and turned the building into an Islamic mosque. In the following centuries, the last time in 987, the mosque, the third largest in the world, was expanded several times and a new minaret was added. In 1236 Córdoba was recaptured from the Moors by Ferdinand III of Castilea and in 1271 the mosque was not demolished but reconstructed into a Christian church (130x180 meters), among other things the minaret was replaced by a baroque bell tower and around 1520 a nave was added by Charles V to the church. The roof of the Mezquita is supported by more than 850 columns of marble, granite and jasper, a semi-precious stone. In 2004, Spanish Muslims submitted a request to hold services in the Mezquita, but this was not permitted by the Vatican.
Also special in Córdoba is the small mudéjar-'sinagoga 'built around 1315. (mudéjar made by Islamic craftsmen in the service of Christian commissionersrs), one of three synagogues in Spain that have survived from that period. The other two synagogues are located in the Central Spanish city of Toledo. 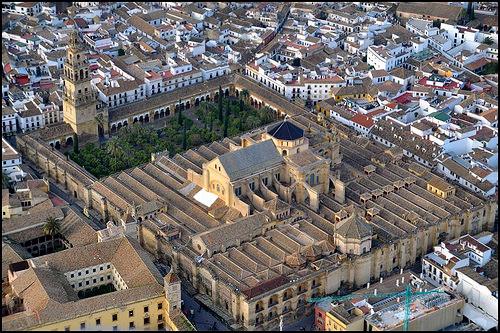 GRANADA
-Cathedral of Santa María de la Encarnación: the construction of this cavernous church did not begin until after the death of Isabel I of Castilia, the 'Catholic', in 1504, and only construction was completed in 1704. The result was inevitably a mix of architectural styles, Baroque on the outside by the 17th century architect Alonso Cano (1601-1667), Renaissance on the inside by the architect and sculptor Diego de Siloé(ca. 1495-1563). Next to the cathedral is the Capilla Real, an imposing Gothic building with a beautiful sacristy, which was built in the early 16th century as a mausoleum for the Catholic monarchs Isabella of Castilea and Ferdinand van Aragón.

ALMERÍA
-Cathedral: the fortress-like cathedral with Gothic (including the three naves) and classical elements (including the choir stalls) is built on a place where there used to be a mosque, but it was destroyed after an earthquake. The crenellated towers and heavy walls were needed because of the repeated attacks of Berber pirates.

ÉCIJA
-The 'city of towers' has more than ten church towers inspired by the 'Giralda' of the cathedral of Seville, including the unfinished Iglesia de Santa Cruz, which a statue of Nuestra Señora del Valle, the patron saint ofÉcija, and houses an early Christian sarcophagus from the 5th century.

JAÉN
-Catedral de Jaén: Designed by Andrés de Vandelvira (1509-1575) and built between the mid-16th century and the end of the 17th century, it is one of the finest examples of Renaissance architecture in Andalusia. The cathedral has 17 side chapels, in the Capilla de San Fernando you can see a beautiful statue of Jesus. The cathedral is said to house the 'Santo Rostro', the cloth with which Saint Veronica is said to have dried the face of Jesus during his Way of the Cross. The neoclassical Iglesia del Sagrario is built against the cathedral.

ÚBEDA
-Capilla del Salvador: chapel in 1536 by Diego de Siloédesigned and built in the period 1540-1556 by Andrés de Vandelvira. it is a fine example of Andalusian renaissance religious architecture. The client was Charles V's secretary, Don Francisco delos Cobos, and the building was to serve as a family tomb.

CARMONA
-Necrópolis Romana: more than 900 family tombs cut into the rock or ' bolumbaria 'from Roman times. The 'Tumba de Serviliam' is the largest tomb and consists of a courtyard with columns and several chambers.

ROCÍO
-Romería del Rocío: one of the largest ( religious) festivals in Spain. The four-day pilgrimage leads to the medieval statue of Nuestra Señora de Rocío, which could work miracles.

SEMANA SANTA
-The Holy Week or 'Semana santa' is the occasion for all the villages and cities to show off with, among other things, beautiful processions, especially that of Seville is known beyond the borders and is therefore often visited by tourists. During these processions, images of Jesus and Mary are carried through the streets, accompanied by music and people in traditional costumes. The images on platforms are carried by 'costaleros', preceded by penitents or 'nazarenos' with pointed hoods. 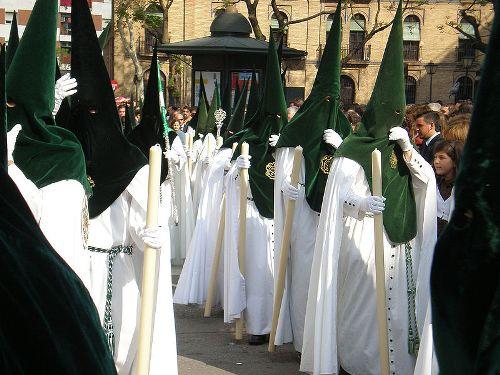