The government of the Autonomous Community of Andalusia, one of the seventeen Spanish Autonomous Communities, is coordinated and led by the autonomous executive body 'Junta de Andalucía'. The president of the 'Junta' works together with a government council of thirteen members, the 'Consejo de Gobierno'. The legislative authority in Andalusia since 1992, the Parlamento de Andalucía, which has been based in the capital of Seville and has 109 members, is located in the hospital de las Cinco Llagas building.
Members of Parliament are elected every four years by universal suffrage. The central government is represented in Seville by a government delegate who also heads provincial delegates from the central government.

Parliament of Andalusia in meetingPhoto: Junta Informa CC 2.0 Generic no changes made

The autonomous region of Andalusia consists of eight provinces with their own administration: Almería, Cádiz, Córdoba, Huelva, Jaén, Granada, Málaga and Sevilla. The provinces are divided into 62 'comarcas', a kind of region or district. Andalusia has 765 municipalities (2008 census). The three symbols of Andalusia, the green and white flag, the national anthem and the coat of arms, were defined by the Asamblea de Ronda in 1918 and the Juntas Liberalistas de Andalucía in 1933. The flag of Andalusia also contains the coat of arms of Andalusia, Hercules between two lions and two columns. Above Hercules is the Latin text 'Dominator Hercules Fundator' and at his feet 'Andalucía, por sí, para España y la Humanidad', which means as much as 'Andalusia for itself, for Spain and humanity '. The current political situation in Spain is described in the chapter history. 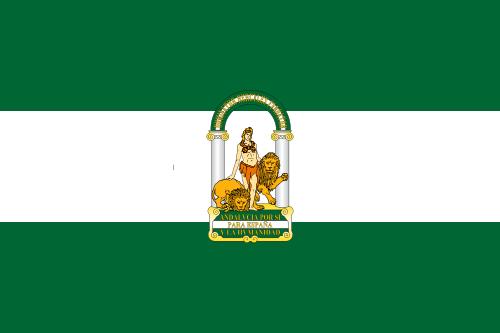 Flag of Andalusia Photo: Miguillen CC 4.0 International no changes made 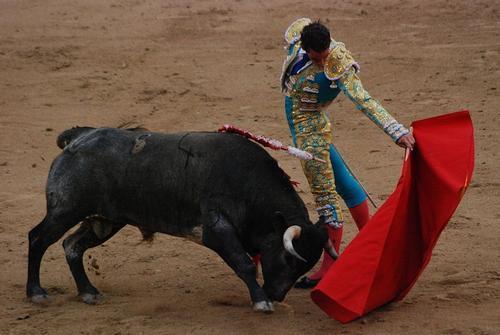 Bullfighting dates back to ancient times, the bull is therefore the national animal of Spain, and this "sport" was also practiced in the Middle Ages in the time of the Habsburgs. At first only by the nobility but later more and more "matadores" emerged from the common people.
There are currently about 700 bull farms where fighting bulls or "toros bravos" are bred. The most expensive bulls cost around 15,000 euros and a matador, the torero that kills the bull, earns up to 50,000 euros per "corrida", per bullfight. Six bulls are killed per corrida. More than 13,000 corridas are held annually with 50 million visitors and about 30,000 bulls.
Corridas only take place in summer and usually start in the afternoon. The performance begins with a parade of three matadores with their helpers, the "cuadrilla". Accompanied by typical Spanish music, they parade through the arena, the "plaza de toros". Then the fight begins and the cuadrillas test and challenge the bull.
Then the "picador" sitting on a horse comes into the picture, injuring the bull in the withers, making the bull weakened by the blood loss. After the picador come the "banderillos", who stick their sharp "banderillas" in the shoulder of the bull. Finally comes the matador who puts an end to the often unequal battle with a sword thrust. Although all bulls eventually die, there are also regular deaths and injuries among the matadors.
Despite many protests from around the world, this Spanish popular entertainment (fiesta nacional) still continues with ever-increasing numbers of visitors. Moreover, it is a real industry where many millions of euros are earned and where 170,000 employees are directly involved. Corridas in this form are prohibited in the Canary Islands, as well as in some mainland municipalities.
The national Spanish public broadcaster RTVE stopped broadcasting bullfighting in January 2011. The channel finds it too violent for possibly watching children. In Spain, a debate has been raging about the bloody tradition for a long time. In July last year, Catalonia banned bullfighting, the second region after the Canary Islands, where bullfights have not been held since 1991.

The Andalusian town of Ronda, with one of the oldest arenas in Spain, has more or less proclaimed as the home of bullfighting. Since 1572, the 'Real Maestranza de Ronda' had been located here, a riding school where the Spanish aristocracy was taught to fight while driving. For this, bulls were hunted in an arena, and then the first modern form of bullfighting is said to have arisen. When a nobleman fell from his horse and was attacked by a bull, one Francisco Romero managed to distract the bull's attention by waving a hat. The following generations of Romero added more and more fitures and Pedro Romero (1754-1839) laid down the rules and movements of modern bullfighting. He also introduced the 'muleta', the red cape used to lure the bull towards him.
Ronda is also the birthplace of one of Spain's most famous 20th century bullfighters, Antonio Ordóñez. The Ordóñez family organizes every September in honor of Pedro Romero the 'Corridas Goyescas', where the best matadors of Spain participate in the original 19th century costumes depicted by the famous Spanish painter Goya in his paintings by Romero. 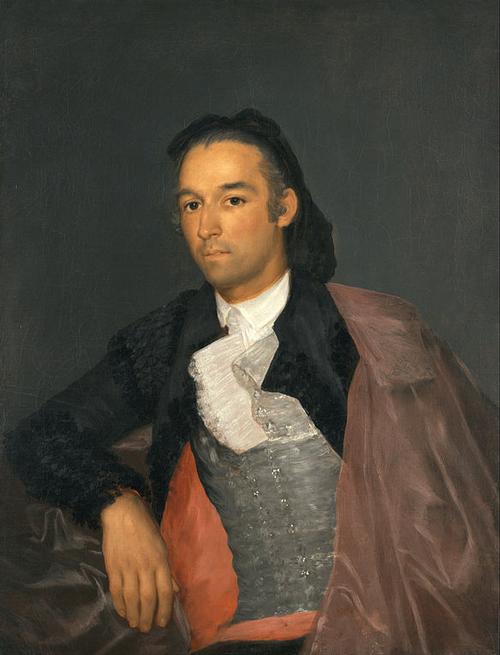 Another very famous matador was the Palma del Río born Manuel Benítez Pérez, 'El Cordobés', who celebrated his greatest triumphs in the sixties of the last century. The most famous female 'torera' was Cristina Sánchez de Pablos, who however retired from bullfighting in 1999 at the age of 27. 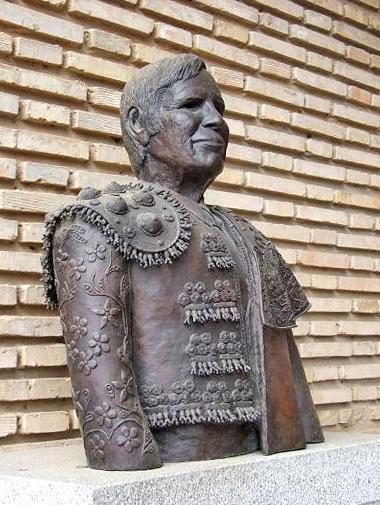 Statue of 'El Cordobés' in front of Córdoba bullring, Los CalifasPhoto: Justojosemm in the public domain

Manuel Laureano Rodriguez Sánchez (1917-1947) or 'Manolete', considered by some to be the best bullfighter ever, was born in Córdoba and died in Linares, province of Jaén. He died in armor at the age of thirty during a fight with the famous bull 'Islero', which hit him in the groin.