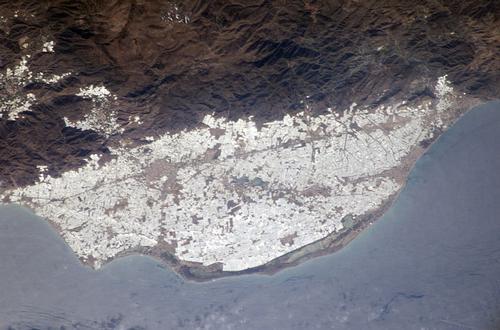 Until 2007, the Andalusian economy ran like hell through a boom in construction activities and high prices of houses and other properties. Add to that huge subsidies from the European Union for agriculture and a still increasing growth of tourism, and also in Andalusia the trees were thought to grow up to the sky. The effect of this economic prosperity on unemployment in Andalusia was gigantic, from 35% in 1994 to 13% of the workforce in 2007, the lowest percentage in living memory. And instead of many Andalusians looking for work elsewhere, many jobs were taken by the flow of thousands of migrants from Africa, Eastern Europe and South America.
In 2008, the real estate market collapsed, lending dried up and the global economic and financial crisis hit hard, including in Andalusia. Tourists stayed away and there was hardly any construction anymore, and because Andalusia was and is largely dependent on these economic activities, the crisis hit Andalusia extra hard. In 2012 the unemployment rate had risen to 33%, the highest rate in Spain. Youth unemployment (16-24 years) had even risen to a shocking 58%. And again, many Andalusians moved away in search of work in less affected regions of Spain or countries like Germany and England.
The only positive thing about this period was the pick-up in tourism in 2001 after a serious dip in 2009 and 2010. In 2011, approximately 8.5 million tourists traveled to Andalusia, although that was still at a much lower level than the record number of 9.8 million in 2008. 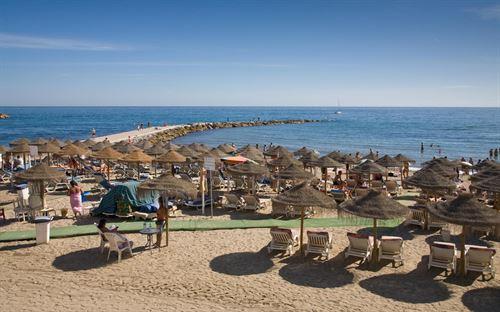 Historically always the economically weakest region in Spain, Andalusia is still predominantly an agricultural area in its traditional economy. The main products grown are: grain, olives, wine, almonds and fruit, especially citrus fruits.
Spain's largest grain region is around the capital, Seville, and in the provinces of Almería, Cádiz and Granada. The fertile plains in the province of Granada mainly yield fruit and vegetables. There is also a lot of horticulture in plastic polythene greenhouses (plasticultura) in the provinces of Almería, Huelva and Granada. Around 25,000 hectares of greenhouses are located around the town of El Ejido in the province of Almería alone. It is not surprising that this greenhouse area is also jokingly called 'Costa del Plástico'.
Cattle breeding takes place mainly on the meadows of the Sierra Morena, Cordillera Subbética and the Sierra de Cádiz.
Andalusia is another very important Spanish fishing region, with mainly sardines, tuna, clams and heart mussels and various types of shrimps.

The province of Jaén, especially around the place Andújar, it is center of olive cultivation in Spain. More than 40 million olive trees, which only start to bear edible olives after 4-5 years, cover the territory of Jaén, about a third of the province, an area of 4500 km2. In an average year, the olive farmers produce about 900,000 tons of olives of more than 200 different varieties, of which about 200,000 tons of olive oil is made. This means that the province of Jaén, with the city of Baeza as olive oil capital, accounts for about half of Andalusian production, about one third of total Spanish production and about 10% of world olive oil production. The quality of the olive oil is controlled by the Denominacón de Origen Controlada. The first cold pressing, the so-called 'virgin oil', is very rich in taste and the best product that is made. 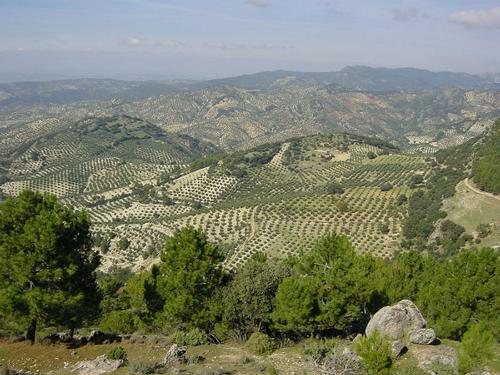 As far as the eye can see olive trees in the province of JaénPhoto: Allie_Caulfield CC 2.0 Generic no changes made

Algeciras, located at the southernmost point of van Spain in the province of Cádiz, is an important trading city and port and is known as the largest Spanish port for passenger transport, including between Europe and North Africa.

In the region of La Axarquía, in the province of Málaga, the local currency, the 'axarco', is still used. This currency, divided into axarquitos, was introduced in 1988 and can be used in most cases next to the euro. The banknotes were designed by the chemist Antonio Gámez Burgos and each coin depicts the sea, the sun and a vine. On the other side of the coin is an image of Ebn Beithar, an Arabian medic and botanist much admired by Gámez Burgos. The axarco is worth about 60 cents and is the only currency in Europe that still exists next to the euro. Gámez Burgos was triggered by the coin 'el zagal', which was used in Al-Andalus between 1480 and 1490.

In the mountainous region of Sierra de Aracena, in the province of Huelva, the place Minas de Riotinto. Here and in the vicinity, silver, gold, iron and copper have been sought for several thousand years, long before the arrival of the Romans. With the demise of the Roman Empire, the extraction of minerals in this region also stopped. It was not until 1873 that this activity was taken up again by the English of the Riotinto Mining Company Limited. The Río Tinto thanks to the copper beautiful color shades and the landscape also looks beautiful. Currently, the mines are operated by the British-Australian mining company Rio Tinto Group, which operates worldwide. 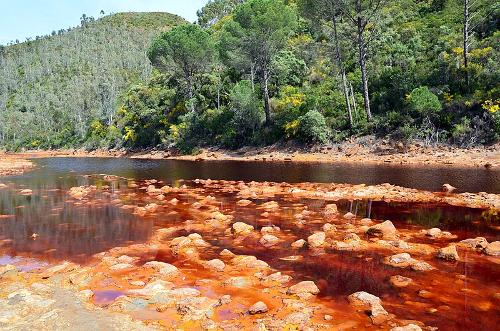 El Condado, a fertile, hilly region east of Huelva, produces the best wine in Andalusia. The center of this wine region is located between the towns of Niebla, Palma del Condado and Rociana del Condado.

Only fortified wine (wine fortified with wine alcohol with an alcohol content increasing from 11 to 18 percent for olorosos and 15.5 percent for finos) from sherry triangle Jerez de la Frontera, Sanlúcar de Barrameda and El Puerto de Santa María north of Cádiz, may call itself sherry. Of these three cities, Jerez de la Frontera can be called the 'capital of the sherry', and this is where most of the wealthy sherry barons live. Sherry, a very British drink since the late 16th century, is the English corruption of Jerez. Already in the time of the Phoenicians, a form of sherry was made in Jerez de la Frontera (before: Xeres under Phoenicians, Ceritium under the Romans, Sheris under the Moors). The Romans and the Moors also continued to produce sherry, which was bought by Dutch traders, among others.
The famous English naval hero Francis Drake was the first, after the conquest of Cádiz, at the end of the 16th century on a large scale. wine shipped to the British Isles. The British were not wine drinkers at all until then, but they loved the sherry. Well-known English merchants from the late 18th century were still well-known names such as (Thomas) Osborne (Mann) and (George) Sandeman. A well-known sherry innovator was John Harvey of Bristol, who produced the first cream sherry (artificially sweetened sherry) (Harvey's Bristol Cream) around 1860. Other innovators included William Garvey Power (discoverers of the fino an amontillado flavor) and the Terry family, both from Ireland. The Terry family ran a number of renowned bodegas in El Puerto de Santa María. Even the most famous sherry house, Gonzalez-Byass of the Tío Pepe brand, had been an Anglo-Spanish company since 1835, led by the Andalusian Manual Maria Gonzalez and London representative Robert Byass. Other famous sherry names include Williams&Humbert and Pedro Domecq.
In the second half of the 20th century, the popularity of sherry increased dramatically, but the quality suffered greatly from the enormous increase in the acreage of vines planted headlong. 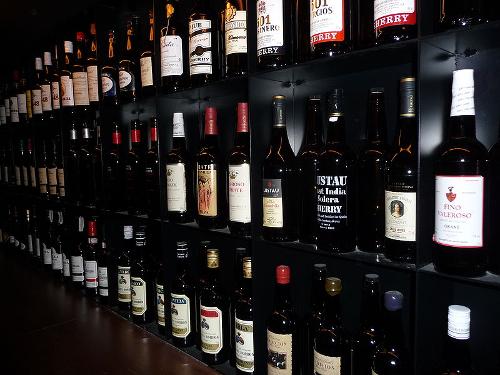 The typical characteristics of sherry are caused, among other things, by the climate that in the region of Jerez de la Frontera (officially: Denominaciones de Origen Jerez-Xérés-Sherry y Manzanilla de Sanlúcar de Barrameda), the very limy soil and the Palomino grape, which grows in few other regions in the world, and which is used for more than 80% of all sherries, together with Pedro Ximénez and the moscatel. There are many types of sherry available, from dry (fino, amontillado, palo cortado and oloroso), slightly sweet (amorosso, Palo Cortado, medium and cream) to very sweet (Pedro Ximenéz, Cream Sherry). The famous sherry of Sanlúcar is manzanilla, which comes from vineyards in the triangle Sanlúcar, El Puerto de Santa María and Jerez,
Typical of sherry, which has to 'mature' for three to seven years, is that it is a mixture of wines from different years, so a label with a year is not necessary. The wooden sherry casks, made of American oak, are stacked in rows or 'criaderas' up to five barrels high on top of each other according to the solera method, the youngest wine in the upper barrels, the oldest wine in the lower barrels. These barrels are continuously connected with each other and, as it were, always complement each other. The bottles are filled from the bottom row of barrels, the 'colera'. Important for the good taste is the development of 'vela de flor' in the barrel, a fungus that forms on the young wine so that the wine does not oxidize and gets and retains its dry, typical bouquet and pale color. 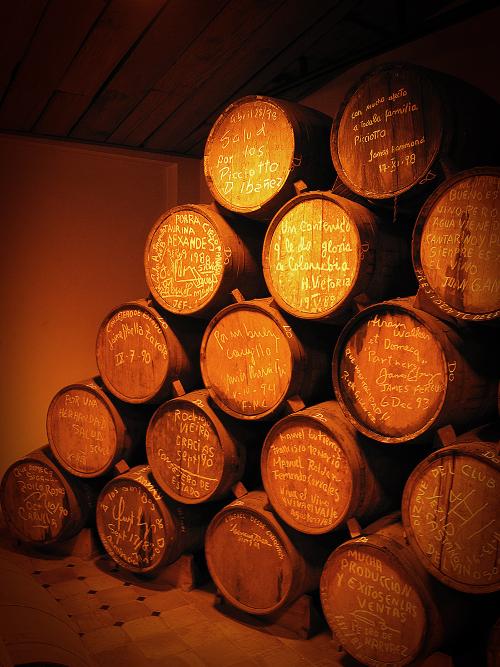 Sherry casks stacked according to the solera methodPhoto: Rpiccio1 in the publc domain