Castellano (Castilian) has been the official state language since around 1250. In other countries, Castellano is actually always called "Spanish". Castellano is a Romance language with many derivations from Latin, but also from many other languages. Spanish contains about 100 words that were brought to the peninsula by the Visigoths, among others. During the rule of the Moors about 4000 words were introduced into the Spanish language. Furthermore, many words have been taken from French and Italian and more recently from English.

Examples of derivations include: 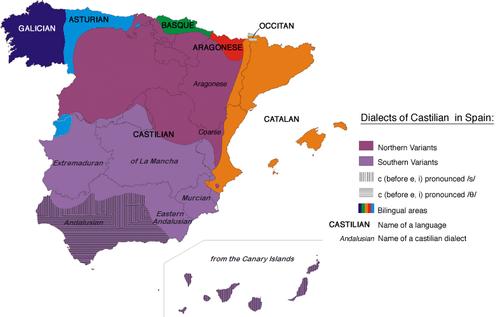 The Andalusian variants of Spanish (Castellano), which are very different from the northern Spanish dialects, are spoken in Andalusia, Ceuta, Melilla and Gibraltar. Due to the large number of inhabitants of Andalusia the Andalusian dialect is the second largest in Spain. Due to the massive emigration from Andalusia to the Spanish colonies in North and South-America, the American-Spanish dialects are quite similar to the Spanish of Western Andalusia in particular. Other Spanish varieties, such as Canary Island Spanish, Caribbean Spanish and other Latin American dialects, are also based on Andalusian Spanish.
Andalusian has a number of important distinctive phonological, morphological and syntactic features, and also the vocabulary differs from Spanish. In terms of vocabulary, many Andalusian words stem from Mozarabic, it is estimated that about 15% of the Andalusian vocabulary is Arabic, a dead language spoken by the Mozarabics, Spanish Christians who lived under Moorish rule during the Reconquista, Romani, the language of the Roma, or of Old Castilian. Many of these words do not appear in other Spanish dialects, but for example in South America and Spanish-speaking Caribbean dialects. Some examples are words like 'chispenear' instead of 'lloviznar' or 'chispear' (drizzle), 'babucha' instead of 'zapatilla' (slipper), 'chavea' or 'antié' instead of 'anteayer' (the day before yesterday).
Some words, pronounced in the Andalusian way, are included in the 'normal' Spanish language, such as the Spanish word 'juerga' (to celebrate), which in Andalusian is ' huelga '.
The flamenco vocabulary, typical Southern Spanish music and dance, shows a number of words that are characterized in Andalusian by the omission of the letter' d ', for example in words like' cantaor '(cantador), 'tocaor' (tocador) and 'bailaor' (bailador). In Spanish these words would be written as 'cantante', 'músico' and 'bailarín'. Some words without 'd' are already included in regular Spanish, for example 'pescaíto frito', which would normally be spelled 'pescadito frito'.

Below are three texts of the Hail Mary, from top to bottom in Andalusian, Spanish and Catalan, another important Spanish language. Here too it is immediately noticeable that the 'd' is omitted, 'madre' becomes 'mae', 'pecadores' becomes 'pecaore'. 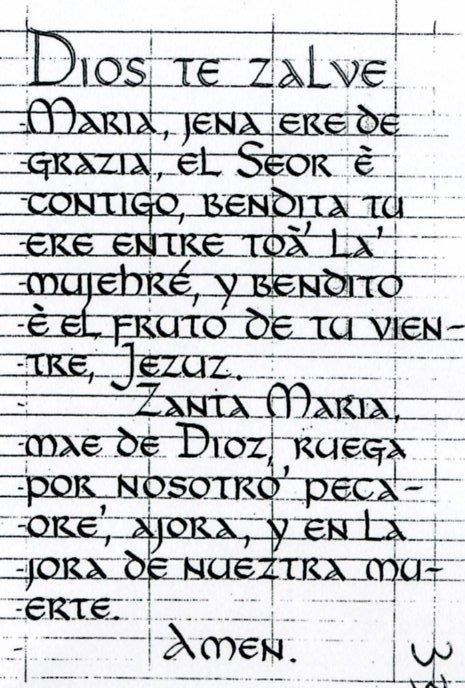 The Hail Mary in Catalan: