Formentera is an island belonging to the Balearic Islands. The Balearic Islands are a group of islands consisting of four main islands, Mallorca, Menorca, Ibiza and Formentera, two smaller islands, Dragonera and Cabrera, and hundreds of other small islands and rocky points. The islands are located east of the Spanish mainland in the Mediterranean Sea; the Spanish city of Barcelona is about 300 kilometres as the crow flies, Alicante about 185 kilometres. The capital of Algeria, Algiers, is only 280 kilometres away. Formentera, the southernmost island of the Balearic Islands, and Ibiza are close together and are separated by the seven-kilometre-wide strait "Es Freus". In this strait are the uninhabited islands Isla Espalmador (only 150 metres away from Formentera; the strait between the two islands is called Pas des Trocadors), Isla Espardell, Islas de los Ahorcados and Islas Negras.

The islands of Formentera and Ibiza are also called the "Pine Islands" or Pityusen, after the Greek "Nesari Pitoussai".

The total surface area of Formentera is 83 km2, very small compared to the other islands (Mallorca 3640 km2, Menorca 702 km2, Ibiza 541 km2). Formentera is 22 kilometres long as the crow flies and only 1.5 kilometres wide in some places. The total length of the coastline is 69 kilometres. The distance between the two main ports of Formentera and Ibiza is only 11 nautical miles.

Formentera is almost flat, only the plateaus in the east and west of the island rise high above the sea; the eastern plateau with the highest point La Mola at 192 metres, the western plateau with the highest point Puig Guillem at 106 metres. The island is surrounded by white sandy beaches, surrounded by dunes that protect the hinterland from high tides. The most beautiful beaches of Formentera are in the north, near the salt lakes or 'salinas'. The sandy beach Platja de Migjorn takes up the whole middle of the south coast: more than six kilometres long, interrupted by rocks and flanked by dunes.

Other famous beaches are: 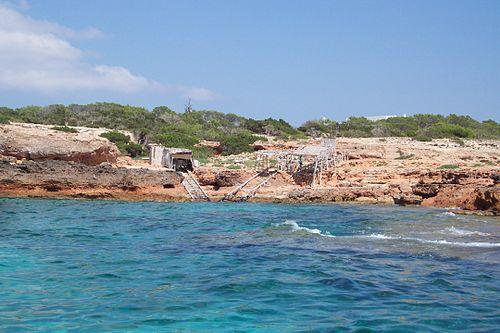 Coastline near Cala Saona, FormenteraPhoto: Coniferous, CC BY 3.0 no changes made

Cliff coasts are found on Formentera near the two lighthouses. Faro de Formentera is located on a 192 m high cliff on the far eastern tip of the island. The road southwards to Sant Francesc leads to the Estany Peix and Estany Pudent lagoons, two saline inland lakes which were created when accumulating sandbanks gradually broke the connections with the open sea. Only the Estany Peix still has an open connection to the sea and, as a result, the lake is full of fish.

There is little evidence of geological antiquity on Formentera. During the Mesozoic Era (220-65 million years B.C.) the sea level rose and Formentera was submerged. Cretaceous limestone deposits can still be found at the surface.

In the Tertiary period Formentera was flooded again and sand, loam and limestone from this period can still be found.

About 8 million years ago, mountains like the Alps and the Pyrenees were formed and Formentera was lifted above

Due to the predominantly limestone soil of Formentera, many so-called karst phenomena can be found. Most notably, karst pipes or 'aven' (funnel-shaped holes), karst caves, dolines (chain or funnel-shaped floors in karst plateaus) and uvulae (series of contiguous dolines). All these phenomena are caused by the combination of water and cracks and fractures in the rock. Rainwater seeps down, dissolving the lime. The most striking phenomena are of course the stalactite caves. The most famous stalactite cave of Formentera is the Cova d'en Xeroni, which was only discovered in 1975. Cliff coasts can be found near the two lighthouses on Formentera.

Formentera suffers from a severe water shortage and water consumption is still increasing due to a growing population and higher per capita water consumption. Of particular note are the underground water reserves or "aquifers", which are created by water penetrating the porous limestone and flowing into these places with impenetrable subsoil. Windmills and pumps tap the water from the groundwater reserves. These mills were also used to grind grain, while other mills were used to pump salt seawater into the salt pans. These mills can still be found on Formentera, together with many ancient wells. Desalination plants are also still used to extract drinking water from sea water.

Typical for Formentera are the detached, natural-coloured or whitewashed farmhouses or fincas, with their sloping roofs (on Ibiza they are cubes). sea level. Formentera was then connected to the Spanish mainland by a land bridge, but after the last Ice Age the water rose again and the Balearic Islands were born.