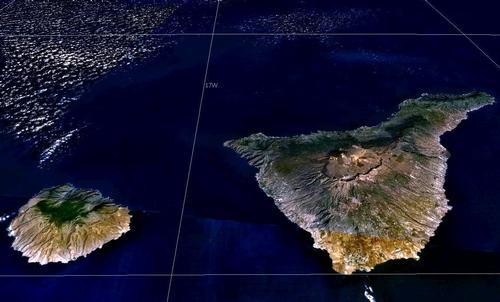 The Canary Islands are geographically part of Africa, but politically they have been part of Spain since the 15th century. The archipelago consists of two provinces, under the name: Autonomous Region of the Canary Islands.

La Gomera is the second smallest island of the Canary archipelago after El Hierro. The island is almost round ('Isla Redonda') with a diameter of 25 km and the surface area is about 376 km2. Essentially, the island is the steeply sloping peak of a volcano resting on the ocean floor.

La Gomera is a rugged mountain island with a coastline dominated by impressive cliffs. La Gomera has few beaches and the interior is covered with deep and often green valleys and ravines. The authentic landscape is dominated by terraces, especially in the north and west of the island, where potatoes, maize, bananas, tomatoes, grapes and dates, among others, are cultivated. Since the Quaternary period, La Gomera has not experienced any volcanic eruptions and there are no craters or volcanic cones like on El Hierro.

In the middle of the island and around the mountain El Alto Garajonay lies the Parque Nacional de Garajonay, which has the same name and covers about 10% (3974 ha) of the island's surface. The park was designated a World Heritage Site by UNESCO in 1986 and is one of the four national parks in the Canary Islands. 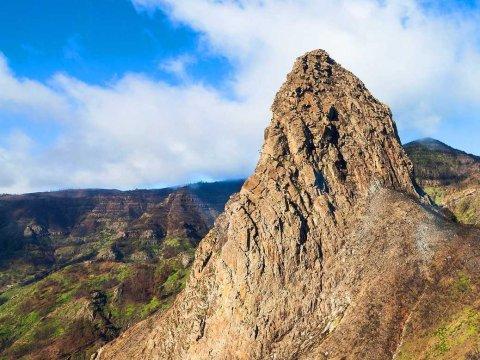 The Garajonay is the highest mountain on the island with a height of 1487 metres. Just outside the park is the volcanic rock formation Los Roques, with the steep rocks Zarcita (1236 metres), Carmen (1140 metres), Ojila (1169 metres) and Agando (1250 metres).

From the high-altitude centre of the island, a total of around fifty deeply carved, diverging gorges or 'barrancos' carve their way towards the coast. These indentations in the landscape can be up to 800 metres deep and sometimes end in small bays, but they also end in green valleys such as the famous Valle Gran Rey.

To the north is the hexagonal Los Órganos ('organ pipes'), steep basalt columns 80 metres high and 200 metres wide. Along the high rock faces on the northern coast, especially in winter, several large waterfalls or 'cascadas' flow, such as the Boca del Chorro.

The "roques", gigantic rocks, are characteristic of La Gomera. They consist of trachyte or phonolite, basaltic rocks created by cooling magma with a high degree of acidity. Diques", vertical rock galleries, were formed in a similar way. Furthermore, there is an enormous table mountain on La Gomera, the Fortaleza