Lanzarote is located 115 km west of the Moroccan coast and is the easternmost island of the archipelago. Lanzarote also includes the islands of La Graciosa (area 28 km2), Roque del Oeste, Rogue del Este, Alegranza (area 10 km2) and Montaña Clara, together called Las Isletas or Chinjo archipelago. Together with these islets, the surface area of Lanzarote is 794 km2. La Graciosa is the only inhabited island of this group of islands and is only 50 metres away from Lanzarote.

Lanzarote, along with Fuerteventura, is the oldest island in the archipelago and was formed around 20 million years ago when the continental plates of Africa and America moved apart. The islands were created by the huge amounts of basaltic magma that came up through the fault lines.

The landscape of Lanzarote has been shaped by volcanic eruptions. The last big eruptions took place between 1730 and 1756 in the area of the Montañas de Fuego or the "Mountains of Fire" and left behind the largest lava field in the world (174 km2). Under the thin crust of the earth it is very warm: ten centimetres below the ground it is 140°C, six metres below the surface it is already around 400°C. These temperatures are reached at Islote de Hilario, the hottest spot on the island.

Because of this, the hilly landscape of Lanzarote consists of lava and there are more than a hundred craters and about three hundred volcanic cones. Lanzarote has no high mountains, the highest peak is the Peñas del Chache (671 m), which is located in the northern rock massif Riscos de Famara. Other high peaks are Monte Corona (609 m) in the north, the Hacha Grande (561 m) and the Atalaya Femés (607 m) in the south and the Montañas del Fuego (510 m) in the west. 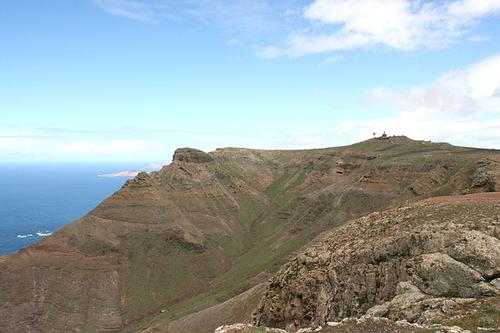 To the west lies a barren moonscape, the Timanfaya National Park. The solidified lava tongues are rock-hard and hardly any vegetation is possible. Before 1730, there were ten villages here in the most fertile area of the island. The six-year eruptions buried the villages under a lava layer 10 metres thick. In the north, the lava layer has weathered somewhat and therefore agriculture is possible. The rest of the island is covered with lava that has been turned into fine-grained powder.

The Playa de las Conchas on the small island of La Graciosa is considered the most beautiful of the Canary Islands. The Playa Lambra on the same island is covered with millions of shells. La Graciosa consists of a dune landscape and several volcanoes, including the Argujas Grandes (266 m).

The highest volcano on Lanzarote is the Alegranze (289 m). Montaña Clara is actually no more than a high volcanic cone (256 m).

Special are the caves that were created by the eruption of Monte Corona 5000 years ago. The Cueva de los Verdes is part of a 7.5-kilometre-long system of caves and tunnels, some of which are even 50 metres below sea level.

The Jameos del Agua, which is connected to the Cueva de los Verdes, is also a cave system formed by volcanism. Inside the cave system, there is a small lake filled with sea water.

Almost half of the landscape is protected and in 1993, Lanzarote was the first island in the world to be declared a biosphere reserve by UNESCO.