In the five vegetation zones on La Gomera, there are more than 2000 plant species, including 700 endemic species.

In the prehistoric Parque Nacional de Garajonay, thanks to the permanent dew and high humidity, more than 450 species of plants and trees grow, often of very large size. In the middle of the park there is an ancient laurel forest ('laurisilva') with trees up to 20 metres high. The laurisilva vegetation is further characterised by cedars, tree heather, juniper, willows and an undergrowth of mosses, holly and ferns. The El Bosque del Cedro forest in particular is a typical example of this type of vegetation. 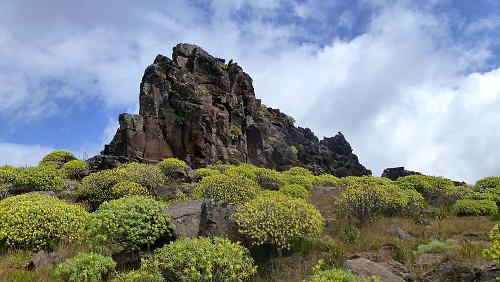 From the foot of the mountains to the waterline grows the Canary Island palm, whose sap is thickened into honey ('miel de palma'). Canary Island palms can grow to a height of 25 metres and the tree was declared the symbol of the archipelago some years ago. There are more than 120,000 of these palms on La Gomera, more than on all the other Canary Islands put together.

Agalán is home to the island's last dragon blood tree, the approximately 150-year-old Drago de Agalán. The dragon tree is in fact a lily species that can become hundreds of years old. 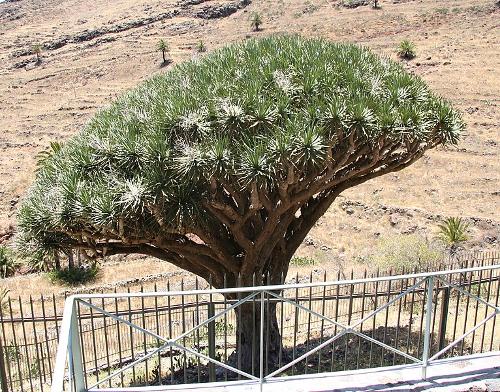 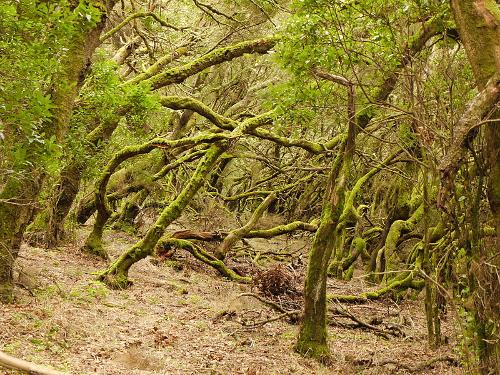 Millions of years ago, laurel forests were scattered all over the world. The Ice Age caused them to disappear almost everywhere, and they only survived on the Canary Islands, Madeira, the Azores and Cape Verde.

Before the arrival of the Spaniards, almost all of La Gomera was covered with laurel forest. After the conquest by the Spanish, entire areas were cut down for the planting of the lucrative sugar cane.

In the Parque National de Garajonay, different species of the laurel family are found. On the European mainland, the Laurus azorica can only be seen as a shrub, on La Gomera it can grow up to a 25 metre high tree. The Ocotea foetens or skunk laurel gives off an unpleasant smell if the tree is damaged. The sap of the Persea indica or Madeira mahogany is poisonous. 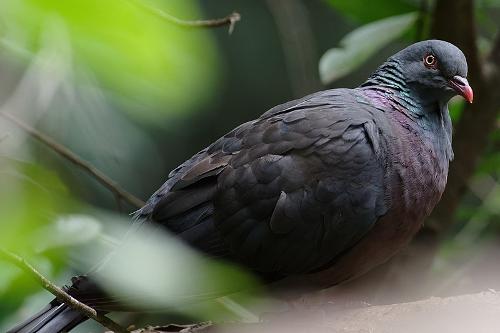 The Parque Nacional de Garajonay is cut through by a large number of ravines, which form a habitat for many rare birds, such as the Bolles laurel dove, which is only found on La Gomera. Invertebrates (e.g. monarch butterfly, rhinoceros beetle and European mantis shrimp) can be found in many variations, vertebrates much less, only some rabbits, hedgehogs and rats. Furthermore, there are many species of (song) birds, including blackbirds, blue tits, the green-browed canary, ravens, kestrels, small eagles and owls. Special birds are the Canary spotted woodpecker and the Canary beech finch, which is threatened with extinction. In the west and centre of the island, the partridge is common. On La Gomera, 68 species of birds nest and more than 240 species of migratory birds.

Snakes and scorpions do not occur on La Gomera. Small lizards and geckos do occur, as well as indigenous species such as the large giant lizard (Gallotia simonyi stehlini), the Canary gecko (Tarentola boettgeri) and the black Gomerian lizard (Tarentola gomerensis). 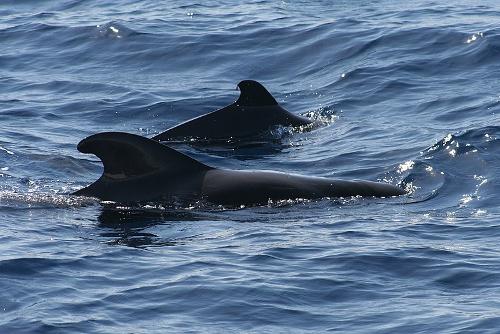