Mallorca is a large island in the Spanish Balearic region. The island has an area of approximately one hundred by seventy kilometers. With its beautiful nature, attractive climate and fine culture, Mallorca acts as a magnet for tourists all over the world. Every year as many as ten million people migrate to the island with its various cities and villages. The town and harbor are buzzing with life and bars and restaurants stay open late into the night. Of all the cities in the Balearic Islands, Palma has the most historical sights and is influenced by Christian kings, Arab rulers and Jewish traders. 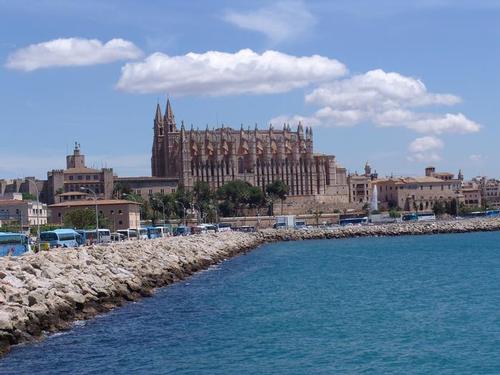 Palma is the pride of the Majorcan, a city with the largest intact center in Europe and all architectural styles available, such as Gothic cathedrals, Catalan Art Nouveau and avant-garde modern buildings. Palma is also the city of elegant shops and boutiques, excellent restaurants and select bars, as well as loud discos.

In the southwest of Mallorca lies the beautiful capital Palma de Mallorca or in short Palma (approx. 360,000 inhabitants), a real tourist attraction and the administrative center of the Balearic Islands. Palma (called Ciutat, "the city" by the inhabitants) is a real walking city with beautiful narrow streets and historic buildings. From Palma there are bus connections to all the larger towns and cities on the island. Trains run to Inca, Sa Pobla and Manacor several times a day.

The moderate climate makes Palma a pleasant destination at any time of the year, although stable good weather can only be said from June. Most tourists visit Palma in the period April to September when it is nice and warm and sunny. July and August are the hottest months when temperatures easily exceed 30 °C. But Palma is also popular in the period from October to March, especially for tourists who do not like too hot weather. In January and February, the blossoming almond trees provide a beautiful sight and the time around Easter is popular for the wonderful temperatures. All in all, early autumn is actually the most suitable period, the biggest crowds are over by then, the beach weather is still beautiful and the evenings are still ideal for outdoor dining. The wettest months are October and February and in winter the temperature can drop to 2-3 °C, but that is a big exception.

The history of Palma de Mallorca largely coincides with that of Mallorca.

For the history of Mallorca see the Mallorca page of Landenweb.

Palma obviously has the most attractions of Mallorca on its territory: cathedrals, churches, art treasures, galleries, museums, the old town (center històric) with its city palaces and the harbor. Palma has flourished again in recent years, not least due to a major restoration program organized by the city council. For example, four new art museums have opened in recent years and Palma likes to advertise itself as an important art city. 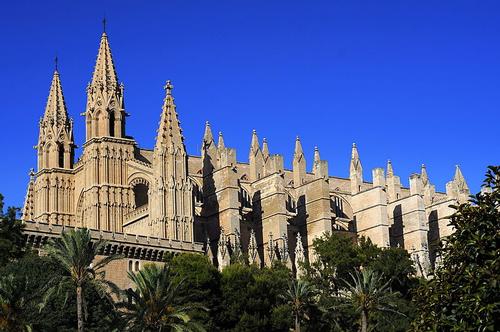 One of the highlights is La Seu Cathedral, one of the most beautiful almshouses and most important Gothic buildings in Spain and where the bishop sits. In the beautiful city palace Can Marqués you can see the urban life of the nobility in the 18th and 19th centuries. The renowned Museu Es Baluard, a modern looking museum located in the old city wall and with underground chambers, allows the tourist to enjoy some 300 works of Spanish and European art from the 20th century. The Museau de Mallorca houses about 3000 pieces from prehistory to the Jugendstil that have to do with the history of Mallorca. There is its own Islamic art and culture department.

From Corpus Christi (the tenth day after Pentecost) to the end of August, more than fifty historic courtyards are open to visitors and guided tours are also given. Palma's main festival is the Festa de Sant Sebastià for the city's patron saint. The party program around January 20 lasts more than a week. 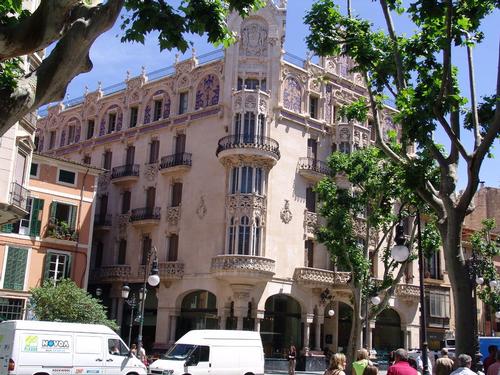 The Fundació la Caixa is Palma's most beautiful building from the 20th century. Built in 1902, the former Gand Hotel now houses a cultural center. The port of Palma is buzzing with life with beautiful yachts coming and going. Fishermen are at work on the quays. Ferries also depart from the port to other islands of the Balearic Islands and to the Spanish mainland

Palma has the shopping offer of a major European city, but also the price level! An exception to this are the shoes, which are often made on the island itself. Major shopping streets are Avingua Jaume III (fashion and shoes), Passeig del Born, Carrer Sant Miquel and the somewhat cheaper Via Sindicato. The many galleries offer art by Majorcan, Spanish and international painters and sculptors.

The center of the entertainment / nightlife is around the sea trade exchange, the Llotja. Another entertainment center is located on Plaça Gomilla. Two entertainment venues are a must: Bar Abaco and Tito's Palma disco.

A wide range of restaurants can be found in Palma. Restaurants serving local specialties can be recognized by their "Cuina de Mallorquína" sign. Much of Majorca food is Catalan and often includes pork. But fish and shellfish are also popular. The simplest snack ia "pa amb oli", a slice of bread spread with olive oil. Especially the wine from the Binissalem region is considered the best in Mallorca.

Palma de Mallorca does not have a beach itself, but the Playa de Palma beach is a stone's throw away. This beach is almost three kilometers long and consists mostly of sand and light gravel. The beach is an ideal place for children, as the seabed does not slope quickly. There are also small playgrounds for the kids. There are many activities on the beach for sports enthusiasts. There is, for example, a diving school. It is also possible to make a trip with a canoe, pedal boat or water scooter.

For the rest, there are plenty of beach bars with the associated cafeterias on the Playa de Palma beach. Parasols and sun beds can be rented throughout the pre and high season. There is also a first aid post on the beach.