Andros' oldest name was Gavros. The island has also been referred to as 'Hydroussa', 'Epagris' and 'Lasia', poetic names describing the island's abundant waters and rich vegetation. Archaeological excavations and the discovery of remains of developed settlements have shown that Andros was inhabited at least as far back as Mycenaean times. The earliest inhabitants are mentioned by scientists Carians, Pelasgians, Phoenicians and Cretans, while in 1000 BC, Andros was colonized by the Ionians. 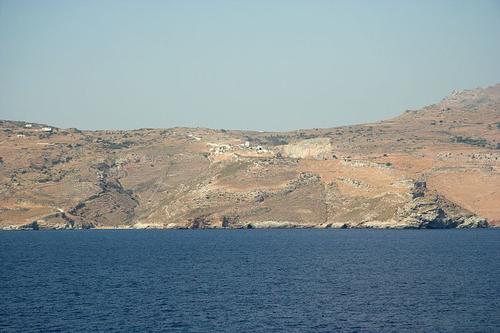 Since the Geometrical period (1050-720 BC) Andros has appeared in historiography. Traces of a geometric settlement have been found in the village of Zagora, on the south-west side of the island. A significant portion of the ancient city has also been excavated, including private residences, a sacred site, a temple and a bailey with a gate, built using similar techniques to those used for the famous Mycenaean Lion Gate.
The second half of the 8th century BC. was the period of the greatest prosperity of Andros. In the 7th century BC. Andros took part in the colonization of Halkidiki and the coastal areas of Thracia in Northern Greece. Until the 6th century BC Andros became an independent city-state that belonged to the ancient Amphitheology of Delos. The god of wine and festivals, Dionysus, was revered as the island's patron saint. The inhabitants spoke the Ionian dialect. During classical times, Paleopolis was the prosperous capital of Andros. This prosperity has been demonstrated by the discovery of 60 silver and bronze coins, as well as the remains of a market and the western part of the wall around the capital.
During the Greco-Persian Wars (490-479 BC) Andros was ruled by the Persians until the naval battle at Salamis (480 BC), after which Athenian rule began and Andros was forced to pay taxes and supply men to fight in the Peloponnesian War, a battle between the city states of Athens and Sparta (431-404 BC). This battle was lost by Athens and Andros came under the domination of Sparta, but was destroyed in 393 BC. again 'liberated' by Athens. In 338 BC. Andros took part in the battle of Chaeronea, and distinguished himself in battle. After the battle of Chaeronea, Andros came under the rule of Philip the Macedonian, and then under the rule of his son, Alexander the Great. Andros remained under Macedonian rule until 315 BC.

Andros Battle of ChaeroneaPhoto: Cristiano64 CC 3.0 Unported no changes made

Alexander the Great's successors fought many wars among themselves for supremacy, leading to Andros being ruled by Egyptian and Macedonian kings at that time. This troubled period led to many changes in the political system, culture and customs on the island. Andros then followed the same fate as the other Aegean islands and mainland Greece, with Roman, Venetian, and Ottoman rule successively.
Andros became from 129 BC. ruled by the Romans and belonged to the Asian part of the Roman Empire.

Piracy and armed conflict between successive Roman governors left the inhabitants of Andros living in dire poverty and maltreatment. It was only under Emperor Hadrian (emperor from AD 117 to 138) that things got better with the people of Andros. In the early years of the Byzantine Empire, Andros initially stayed with Asiaa after which it came into the possession of the commander of the Aegean Sea. At that time, Byzantine churches and monasteries were built throughout the Aegean region.
The capital, Constantinople, and with it the entire Byzantine Empire, fell at the hands of the Crusaders in 1204, and Andros then fell into the hands of the Crusaders. Venetians. The first Venetian driver of Andros was Marino Dandolo (from 1206), who was murdered in 1233. 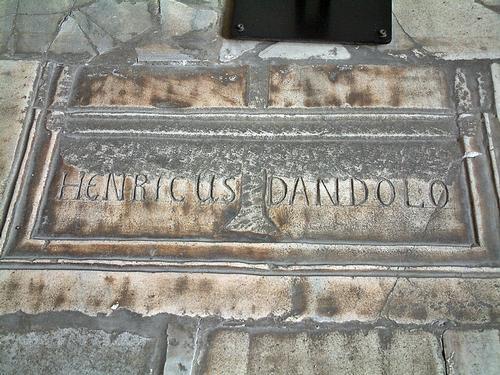 In 1209 Dandolo already recognized the sovereignty of the Duke of Naxos, Marco Sanudo (1154- 1227), nephew of the 39th Doge of Venice, Enrico Dandolo (1192-1205). Later the Sanudo family took over power and rule of the island, in 1383-1384 Francesco Crispo (died 1397) was ruler of Andros. He appointed Petro Zeno (1384-1427), who was married to Crispo's daughter, as Lord of Andros. Zeno was the perfect leader, bringing security and ushering in an economically prosperous period.
In the mid-15th century, the island was taken over by the Somaripa family (Fiorenze Sommaripa and her brother) from the neighboring island of Paros, where Fiorenza's father, NicolòI Sommaripa (died 1505) was in charge. A period of oppression followed, but the population fiercely resisted and expelled the rulers. A temporary island government was formed that was relieved in 1579 by Turks, who had meanwhile conquered the island. This ended the domination by the Venetians, who laid the foundations for feudalism on Andros, which influenced the society on the island for a long time. They also built many mansions and castles and the silkworm trade became the basis for prosperity on Andros.
Due to the good relationship with the Turks, the inhabitants of Andros had more privileges than the inhabitants of other islands. They did not have to be converted to Islam, churches and monasteries were allowed to be used, some taxes were abolished and titles were not taken. Of course, this did not mean that no rights violations took place, but the situation on Andros was not comparable to that on other islands in the vicinity.
Just before the Greek War of Independence (1821), the village of Korthi, near the church of Agia Triada, a school founded by the monk Samuel Plasimis. During that period, 37 inhabitants of Andros were members of the 'Filiki Etairia', a secret society with members from many other islands, which opposed Ottoman rule. On May 10, 821, the priest and philosopher Theophilos Kairis (1784-1853) on behalf of Greece declared war on the Turks by raising the revolutionary flag on Agios Giorgios Church in Chora, and the War of Independence (1821-1832) was a fact. 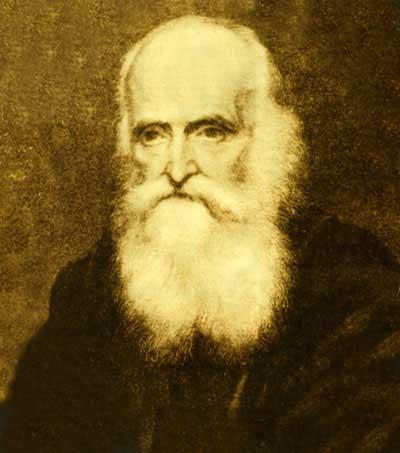 The Greeks won the war against the Turks and in the period after the revolution Andros experienced a great economic boom due to the successful development of the shipbuilding and port of Andros. Between 1923 and 1930, Andros was, after Piraeus, the port where the most ships were registered and where the most ships moored. and German occupation bombed. Beautiful houses and other buildings fell prey to the devastating bombs. 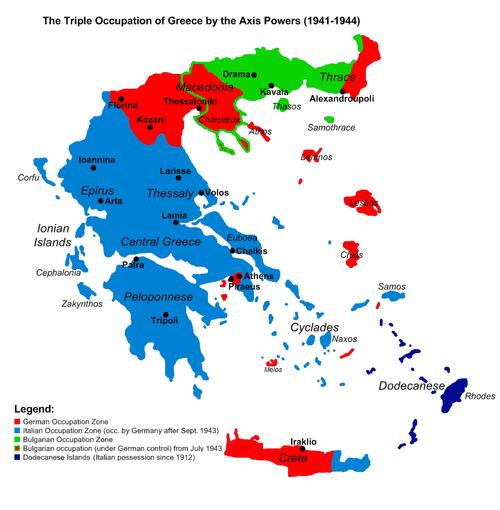 Andros was occupied by the Italians in World War II Photo: Cplakidas CC 3.0 Unported no changes made

Mass immigration was characteristic of Andros in the 19th and 20th centuries. In the 19th century many inhabitants of Andros moved to large cities such as Constantinople, Smyrna and Alexandriaa and emerging cities like Piraeus and Ermoupolis on the island of Syros. In the 20th century, the migrants mainly focused on countries such as Canada and the United States, and after the Second World War, Athens became particularly interesting for young people looking for a job or to start a study that could increase the chance of a job.

See also the history pages of Greece on TheWorldOfInfo.