The United States of America, is a federal republic in North America, comprising the District of Columbia and 50 states, 49 of which are in mainland North America and one (Hawaii) in the Pacific Ocean. The total land area of the United States is 9,809,155 km², making it the largest country in the world after Russia and Canada. The United States borders Canada to the north (8,893 km, including 2,477 km border with Alaska), Mexico to the south (3,141 km), the Atlantic Ocean to the east, and the Pacific Ocean to the west. The land border with Mexico is half formed by the Rio Grande. The distance from New York to Los Angeles is almost 5000 kilometers.

Part of California in the southwest is exactly on the St. Andreas fault. As a result, there is an increased risk of earthquakes in this area.

On the eastern side of the American continent, the Appalachians stretch from Atlanta to Cape Gaspé in Canada. In the east this mountain consists of a low plateau, the Piedmont, and a steeply rising mountain ridge, the Blue Ridge with Mount Mitchell (2037 meters) as the highest point in the south. The central part consists of a number of parallel ridges between which there are wide valleys, the Valley and Ridge Region. The west side is closed off by a high steep edge, the Alleghany Mountains. 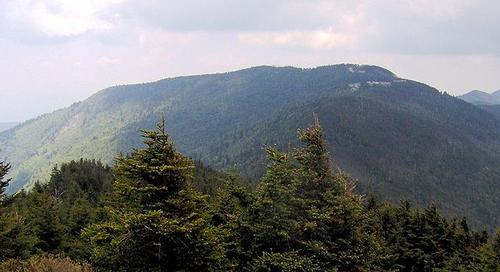 Mount Mitchell, highest point of the USA east of the MississippiPhoto: Brian Stansberry CC 3.0 Unported no changes made

The flat central part of the United States has been lifted but hardly folded due to the folding and lifting of the Rocky Mountains. This has created a landscape of a predominantly flat land that gradually rises to the foot of the Rocky Mountains. Giant prairies stretch from Ohio and Missouri to the east, through Illinois and Wisconson, Minnesota, Iowa, and northern Missouri, then spread into Central Texas, Oklahoma, Kansas and eastern Nebraska and southern and North Dakota. The low part west of the Mississippi has almost completely turned into an agricultural area, the so-called "Corn Belt". The high part is a dry steppe at the foot of the Rocky Mountains at about 1500 kilometers. Large rivers such as Missouri, Platte River and Arkansas have cut wide valleys. This great plain is interrupted in the states of Missouri and Arkansas by the Ozark Plateau, a continuation of the Appalachians.

The Gulf Coast is a large silt area that extends into the Florida peninsula. Along the Atlantic coast, this sandy plain continues to Cape Cod. 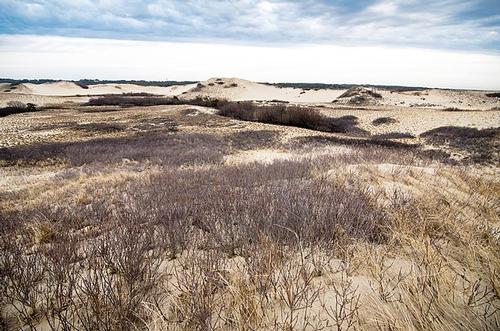 In the west, the Cordillera rises 2000 meters above the Great Plains. This vast mountain range extends from the far north of the American continent, the heavily glaciated Brooks Range, to the Sierra Madre del Sur in Mexico; in fact, it also continues in the Andean chain in South America. The eastern chain of the Cordillera is formed by the Brooks Range, the Mackenzie Mountains, the Rocky Mountains and the Sierra Madre Oriental.
There are a number of high plains to the west of this chain. This leads to a number of ridges, creating smaller basins, which in some cases have no outflow to the sea, so that salt lakes, such as Great Salt Lake, are formed. 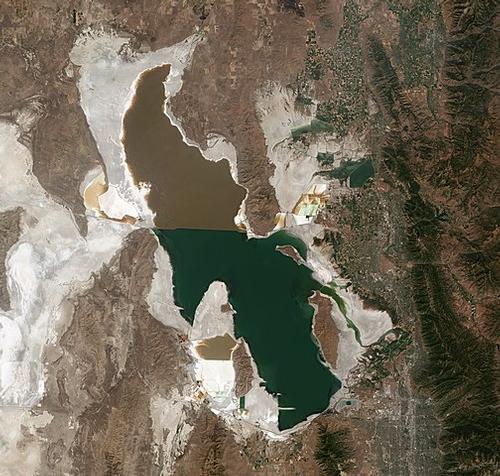 The Great Plains lie to the west of the invisible line that clearly divides the North American continent in two: the 508 mm precipitation line, one of the major geographical divisions in the United States. This line, which runs almost straight through the center of the country from north to south, separates the more inhospitable east from the dry west, which lies in the rain shadow of the Rocky Mountains, with its unpredictable and low rainfall, its harsh climate and smaller , more dispersed population.

The land between the Rocky Mountains and the Sierra Nevada in the west is dry: the sun burns most of the year, the mercury can rise above 50 °C in the shade, and even fairly large mountain rivers dry up quickly. In this part of the country is also "the bottom of the United States", Death Valley. This ancient lake bottom, nowadays a desert of more than 200 kilometers in length, lies 830 meters below sea level.

The rivers have cut huge canyons in these high plains; famous is the Grand Canyon of the Colorado River. The Grand Canyon in Arizona is the deepest canyon in the world, 446 kilometers long and an average of 1.6 kilometers deep. To the west, this plateau is closed by a mountain range with a steep east side and a less steep west side: Alaska Range, St. Elias Mountains, Coast Range, Cascade Range, Sierra Nevada and Sierra Madre Occidental. In the north of the continent, this chain forms a real fjord coast, with large glaciers sliding into the sea, especially in Alaska. Further south there is a coastal mountain range for this, in the United States a closed mountain range that closes off the Willamette Valley and the Valley of California. Even further south, it separates the Gulf of California from the Pacific. 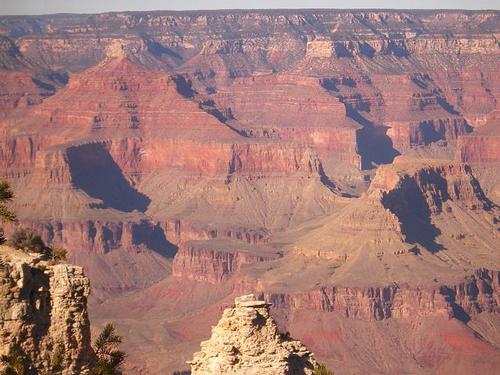 Alaska, the 49th state, is a different story in landscape terms. Alaska consists of ice. Under the ice and snow layers, the ground is frozen to a depth of 90 meters. Even in summer, when the sun is practically not setting, the bottom does not thaw below 60 centimeters. In the far north the temperature can drop to below 40 °C, in the south the winters are more bearable. 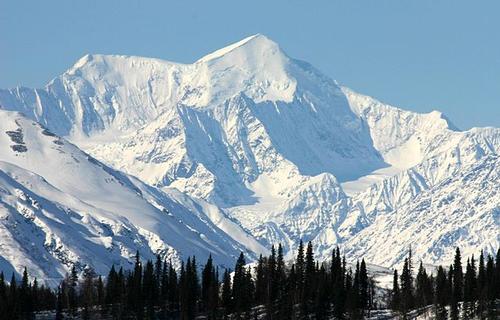 Hawaii, the 50th state, cannot be compared to the other states either. The eight large and about a hundred small islands are spread over a length of 2500 kilometers in the Pacific. The island closest to the American coast is about 3,200 kilometers from San Francisco. The largest island is Hawaii and has five volcanoes, two of which still operate. The 4200 meter high crater of the Mauna Loa is the largest active volcano in the world.

On the mainland there are also a number of large volcanoes active such as the Katmai (ALaska Range), Mount Rainier (Cascade Range), Mount Lassen and Mount Shasta (Sierra Nevada). The state of Alaska has approximately 70 active volcanoes. Every year about 5,000 earthquakes and sea tremors also occur, some of which are very severe. On March 27, 1964, an 9.2-magnitude earthquake occurred 120 kilometers southeast of Anchorage.

The water balance of the United States is primarily determined by the relief. The main river basins are located in the central lowland.An important hydrographic area are the great lakes on the border of the United States and Canada. With a total area of approximately 250,000 km², this is the largest freshwater basin in the world. The lakes are interconnected by rivers and connected to the sea via the St. Lawrence River.

The biggest difference in height exists between Lake Erie and Lake Ontario. This height difference is overcome by Niagara Falls, waterfalls that can be counted as the largest in the world in terms of water mass. The heights of the American Fall and the Canadian Fall are not that spectacular in themselves, 52 and 48 meters respectively. Yosemite National Park is home to one of the world's tallest waterfalls, the Ribbon (491 meters). 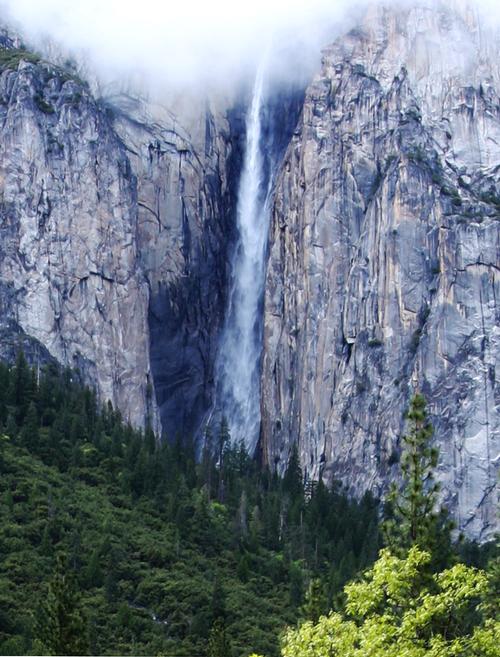 Ribbon Waterfall, highest of the USAPhoto: Rennett Stowe CC 2.0 Generic no changes made

The Mississippi has its source on the Mesabi Range and is navigable from the Anthony Fall near Minneapolis. The decline is small and after the incorporation of the Missouri and the Ohio, the river goes to the sea like a mile wide stream with great meanders. 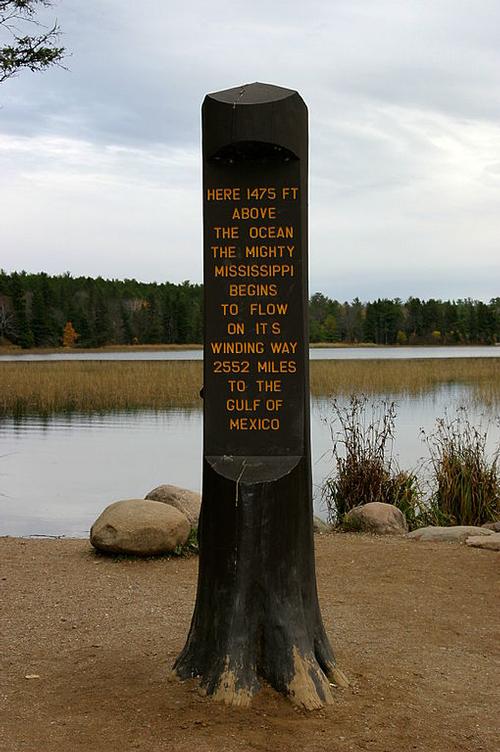 The Rio Grande, flowing through one of the driest areas of the Great Plains, has great significance for irrigation. The rivers of the west side of the Rocky Mountains often go through deep canyons through the plateaus of the Great Basin. Most famous is of course the Grand Canyon, which is cut out by the Colorado River.