There are major climatic differences in the United States. From a polar climate in northern Alaska to a (sub) tropical climate in Hawaii and Florida. The rainfall is also unevenly distributed. There are quite wet areas, such as the northwest and southeast, while the southeastern states are largely desert. In addition, the Rocky's has a clearly high mountain climate. 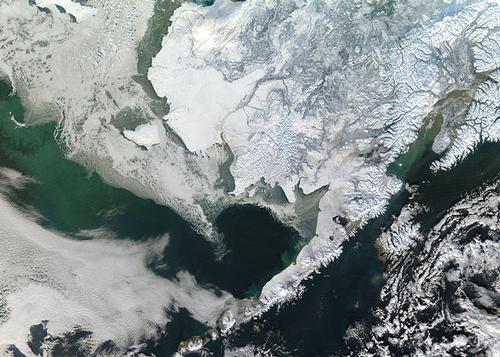 Satellite photo of a winterly Alaska, USAPhoto: Jeff Schmaltz in the public domain 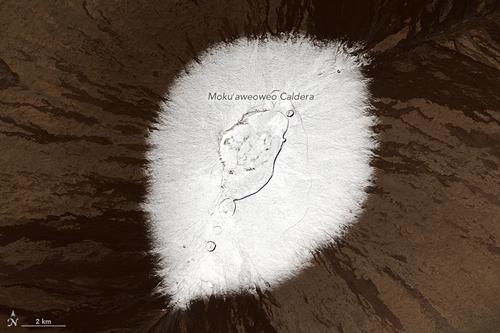 The northeastern states, collectively referred to as New England, are Maine, New Hampshire, Vermont, Massachusetts, Rhode Island, Connecticut, Delaware, New Jersey, Maryland, eastern New York and Pennsylvania, and the District of Columbia. This part of the United States generally has a volatile, humid continental climate, with moderate rainfall throughout the year.

Due to the polar influence, the winters to the north are getting colder and the most snow falls there. Summer heat waves can drive temperatures up to 38 °C for several days. The weather on the coastal strip is then very unpleasant due to the simultaneous very high humidity. In the big cities it is even more unpleasant because of the slightly higher temperatures that apply there. Throughout this region, it can get very cold in winter and even in spring, with a lot of snow in the north, especially in the Appalachian Mountains.

Although one of the regions with the least sunshine, the sun shines more often than in, for example, northwestern Europe. Daily sun hours range from an average of 4-5 hours in winter to 9-19 hours in summer. Some valleys in the Appalachians are often misty due to a combination of air pollution and ordinary fog.

Fall lasts only a few weeks in this part of the United States, but it is world famous. This so-called "Indian summer" arises when in the autumn the cold and polar air from Canada has trouble expelling the warm air that is still present. The cold air then comes to a standstill and a high pressure area develops. The first day of the "Indian summer" is usually quite cold, but the following days get warmer and can reach temperatures of 25 °C. The heated air remains, as it were, on the ground, covered with a layer of cold air. The first nights with frost are the signal for the trees to stop the food supply to their leaves. This also stops the production of green chlorophyll pigment, and the famous red, brown and yellow colors are visible that give the 'Indian summer' a spectacular face. 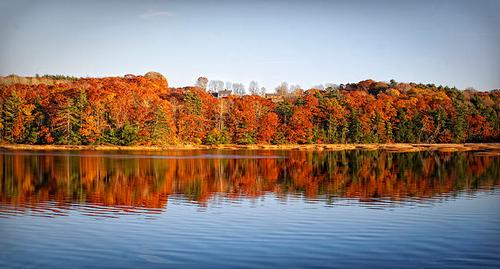 In winter, the dreaded blizzards occur in the northeastern United States. These are heavy snow and ice storms, combined with very low temperatures, which bring meters of snow in a short time.

Occasionally in the summer a remnant of a tropical whirlwind or "hurricane" may penetrate to the northeast; the destructive power has already decreased considerably.

In winter there is not much rainfall, usually in the form of snow. Along the Canadian border and the Great Lakes, winters can be very severe with blizzards that supply very cold air from Arctic Canada. The southern midwestern states have a more moderate weather type with long, rainy summers and mild winters. Open skies and abundant sunshine are typical of this region, even in winter. Sun hours range from 4-5 in winter and 10-11 in summer.

Further west, in the Great Plains, there is a semi-arid climate with an average rainfall of 254 to 762 millimeters. A strong, dry wind (the chinook) blows from the Rocky Mountains and affects the weather in the western part of the Great Plains. This area has wide differences in temperature because of the cold air that is introduced from the North Pole and warm tropical influences from the Gulf of Mexico. The average daily temperature in Iowa ranges from -11 °C in January to 30 °C in July.

The southern states and the states bordering the Gulf of Mexico are Oklahoma, Arkansas, Tennessee, Texas, Louisiana, Mississippi, and Alabama. This large area is located roughly south of the 37th degree latitude between the Rocky Mountains and the Appalachians.

The climate in all of these states is quite similar to the mid-west climate; but due to the southern location and under the influence of warm air from the Atlantic Ocean and the Gulf of Mexico, winters are warmer and shorter than in the north. Arctic air occasionally penetrates, but it never lasts longer than a few days.

Cold spells are more common in western Texas. The eastern part of this region is much wetter than the western one. The annual rainfall in the east is almost everywhere between 1000 and 1250 mm. In the west, the precipitation is between 350 and 500 mm. Summer is generally the wettest season with a lot of thunderstorms.

The climate is sunny throughout the region, especially western Texas and Oklahoma (averaging 5-6 hours a day in winter and 10-11 hours in summer). The summer heat is well tolerated, except along the Gulf of Mexico, where the combination of heat and high humidity feels uncomfortable. This region is often affected by hurricanes and tornadoes in late summer.

Desastrous result of the hurricane Ike in Louisiana, USAPhoto: Coast Guard Jayhawk 6031 in the public domain

The Rocky Mountains states are Montana, Idaho, Wyoming, Nevada, Utah, Colorado, Arizona, New Mexico, and West Texas. In general, the northern states of Idaho, Montana and Wyoming have a much cooler climate in both winter and summer, a much longer cold season, and more rainfall.

However, large differences can be observed throughout this region due to the elevation, causing cold regions in the south and arid regions in the north. Most of this region has little rainfall, especially in the south where large parts of Arizona, New Mexico, Utah and Colorado are deserts or semi-deserts with rainfall amounts below 300mm per year. This is due to the western mountain areas of California, which means that rain clouds cannot reach this area. 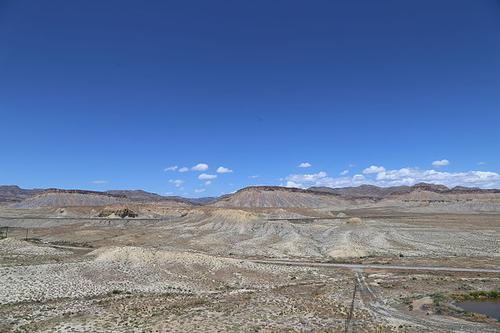 The southern part of this area has the sunniest climate in the United States; Phoenix and Las Vegas have approximately 8 hours of sunshine per day in the winter months and 12-14 hours in the summer months. The high temperatures in the entire area are tempered by the low humidity.

The northwestern United States is made up of the states of Washington, Oregon, and western Idaho. The climate in this region is very similar to that of Northwestern Europe and Great Britain.

In these states are high mountains of the Western Cordillera, where there is eternal snow. The climate here is more similar to that of the Northern Rocky Mountains. The coastal districts have the slightest differences in winter and summer temperatures. Furthermore, it is often cloudy here and therefore the least sunny region of the United States with many rainy days. Some mountain areas are very wet at 2500-3000 mm per year. This is in contrast to some sheltered valleys where only approx. 300 mm falls per year. It is also the only region of the country where winter is the wettest season, but summer also has no long connected dry periods.

The number of sun hours in winter is 2-3 hours per day and 9-10 in summer on the coast. More inland and in higher areas, winters are a bit sunnier with 5-6 hours of sunshine a day.

California has a climate similar to the Mediterranean climate, but due to the vastness of the state there are also major differences here.

The northern coasts have a climate much like that of the northwestern states. Farther south and more inland, temperatures continue to rise and summers in Central and Southern California become dry. In the southeast, conditions are more and more like the desert areas in Arizona and northern Mexico.

The mountains on the coast and of the Sierra Nevada are so high that the abundant precipitation often falls in the form of snow. 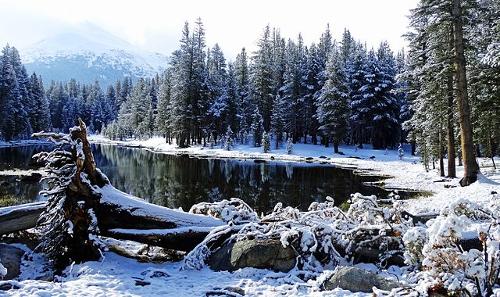 California is one of the sunniest states in the country. The number of hours of sunshine varies from 7-8 in the winter to 12-14 hours in the summer in the driest areas of the state. Due to the sea fog, these values on the coast are much lower: from 6-7 hours in winter to 9-10 in summer.

San Francisco is a special case with fairly cool, mild summers. This is due to the fairly frequent fog that drifts into the city from the sea.

The interior and the north coast of Alaska have a polar climate or semi-polar climate. There is always snow and ice on the mountains and the flat parts suffer from permafrost. Rivers are frozen from September to the end of May.

In summer it can get surprisingly warm and that is due to the long days of daylight. Winters are severe and long lasting. The temperature is very unpleasant, especially when the wind is blowing hard. Precipitation amounts are limited and usually fall in the form of snow; summer is the wettest season. The coast of the Pacific has a completely different climate. Here there is much more rainfall and the weather is much less predictable.

Summer temperatures are lower here than inland and winters are cool but much milder than inland. Clouds and fog occur in all seasons.

Hawaii has a tropical climate where temperatures are tempered by the altitude and the wind blowing from the sea. The Hawaii Islands lie in the area of the northeast trade wind that blows almost all year round. 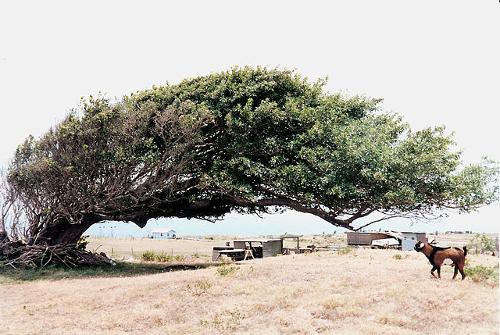 All branches all growing in one direction due to strong winds all year longPhoto: Howcheng CC 3.0 Unported no changes made

The temperature is fairly uniform, at sea level an average of 23 °C, with a maximum of 30 °C and a minimum of 11 °C. The rainfall mainly occurs on the windward side of the islands. The largest rainfall in the world has been recorded on Kauai, 12.5 m per year at the Waialeale observation post, 1740 meter high. The southwest coast is relatively dry, the northeast coast receives the most rainfall.

In the drier areas, most precipitation falls between October and March, which is quite uncommon in the tropics. The number of hours of sunshine is not too bad considering the amount of rainfall. It ranges from 7-10 hours in the drier capital of Honolulu to 4-5 hours in the wetter areas.