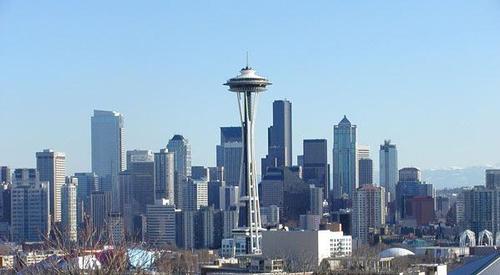 Seattle is a major coastal city and seaport and the capital of King County in the US state of Washington. According to the 2011 census, the city had 620,778 inhabitants and the metropolitan area had 3,500,026 inhabitants. Seattle is the largest city in the Pacific Northwest region and the largest city on the west coast north of San Francisco. Seattle is the 8th largest port in the United States and a major gateway for trade with Asia. During and after World War II, the city experienced high economic growth, mainly thanks to the Boeing Company and the aircraft industry based here. Seattle became a center of the aircraft industry.

Seattle's coordinates are: 47 ° 36'35 'North latitude and 122 ° 19'59' West longitude. The city is located on a narrow isthmus between Puget Sound (an inlet of the Pacific) and Lake Washington, about 100 miles (160 km) south of the Canadian border. It is more northerly than Canadian Toronto. 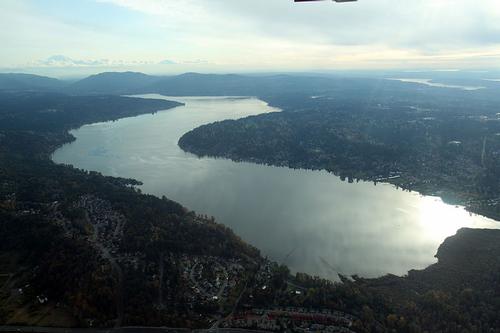 Lake Sammamish near SeattlePhoto :Jelson25 CC 3.0 Unported no changes made

Like Rome, Seattle is located on seven hills. The Olympic Peninsula is located along with the Olympic Mountains to the west of Puget Sound, the Cascade Range and Lake Sammamish to the east of Lake Washington. The lush green forests and numerous water sources provide excellent living conditions. The urban area covers 369.2 km². The metropolitan area covers 21,202 km². Seattle is in a dangerous earthquake zone.

The climate of the city has the characteristics of a maritime climate and a cool Mediterranean climate. Winters are cool and rainy, summers are dry. Most of the rain in Seattle falls in the months of November, December and January. Temperatures average +2 to -4 °C in winter. Summers are sunny, fairly dry and warm with daytime averages of around 24 °C. Snowfall occurs in winter, but heavy snow is rare.

The Seattle area was inhabited by Native Americans for at least 4,000 years before the first white settlers made their appearance. A group of Europeans arrived in 1851 and settled at the mouth of the Duwamish River. In 1851 they formally claimed the land. Seattle became the city's official name in 1853. For centuries, the timber industry was the major industry in the area, but from the late 19th century onwards, the city became a commercial center, notably through the export of goods to Alaska during the Klondike Gold Rush.

During World War I, shipbuilding became the main industry and gave a strong boost to the city's economy. World War II brought prosperity to the city partly because of the newly established Boeing factory with its immense aircraft industry. The city hosted the 1962 World's Fair. Major companies settled in Seattle, most notably Microsoft. This company opened its headquarters here in 1979. Now Seattle is one of America's top cities in terms of economic strength and quality of life. The music scene is thriving and environmental initiatives have made Seattle one of America's greenest cities. With a mix of natural beauty and creativity, the city remains attractive to technology companies and artsy residents alike.

There are plenty of attractions in the city, the main ones being: Space Needle, Seattle Aquarium, the Pacific Science Center, the EMP Museum, the Woodland Park Zoo, the Aviation Museum, and the Seattle Art Museum. 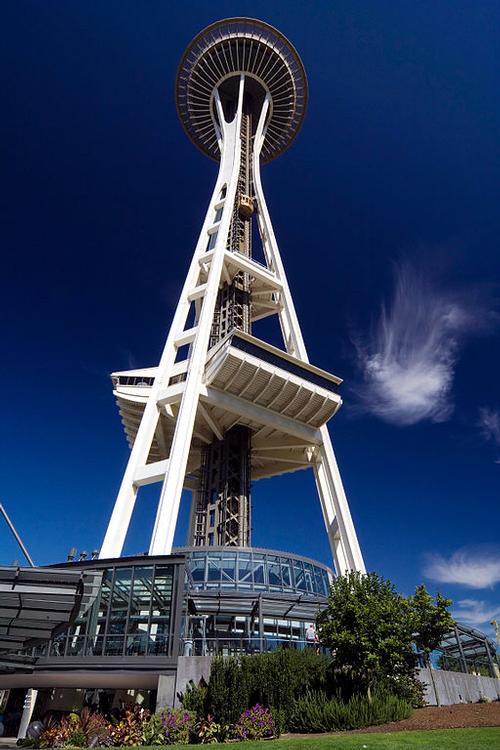 Space Needle in SeattlePhoto: Ikiwaner CC 3.0 Unported no changes made

The Space Needle dates from the 1962 and is Seattle's most recognizable point. Visitors have a spectacular 360 ° view of the city from the observation deck. The Seattle Center next to the Space Needle has become a venue for numerous cultural events. The Seattle Center Monorail runs from Seattle center to Westlake, a shopping center about a mile southeast of the city. 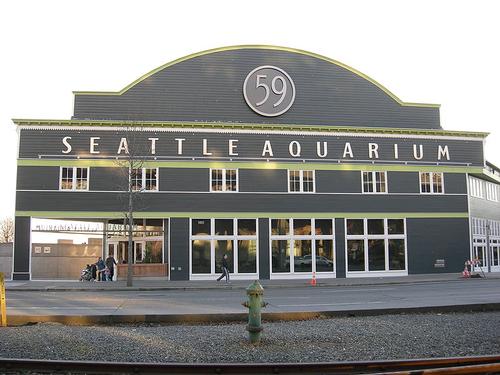 Located on Pier 59 overlooking the Puget Sound, the Seattle Aquarium is a nationally recognized educational center that first opened its doors in the spring of 1977. It features over 380 species of fish, invertebrates, birds and marine mammals. But you can also see the first realized salmon ladder and a fish farm in an aquarium. It is also the first institute to display both sea otters and giant squid in its own purpose-built habitat. 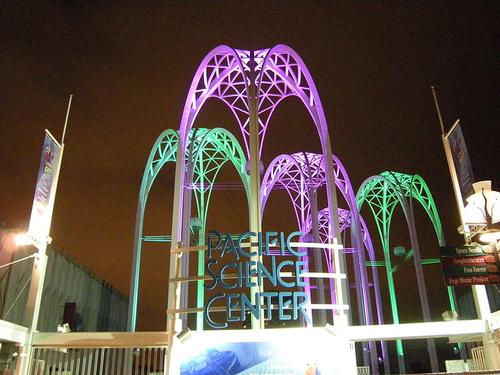 The Pacific Science Center is a leading institution to introduce children to science in a playful way. The museum consists of eight buildings, including two IMAX theaters (one of the few places in the world with more than one IMAX theater), one of the world's largest Laser Dome theaters, a tropical butterfly house, a planetarium, and hundreds of science exhibits .

The EMP (Experience Music Project) Museum is a colorful building designed by Frank Ghery. Here you can see the most important moments in rock music, science fiction and popular art. The science fiction museum is the only one of its kind in the United States. It explores the genre's vibrant history, creations and ideas. There are interactive exhibitions on the technologies, experimental societies and artificial creatures of the science fiction genre. 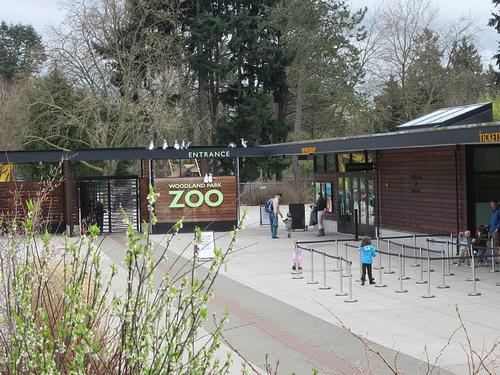 Woodland Parl Zoo in SeattlePhoto: The Ninjaneer CC 3.0 Unported no changes made

The award-winning Woodland Park Zoo is committed to animal conservation. It is located north of downtown Seattle near the Green Lake, the Lower Queen Anne neighborhood, and Belltown. The zoo has an area of just over 37 hectares and includes an African savanna, habitat for the Asian elephant, a fantastic butterfly garden, tropical rainforest and fragrant rose gardens. 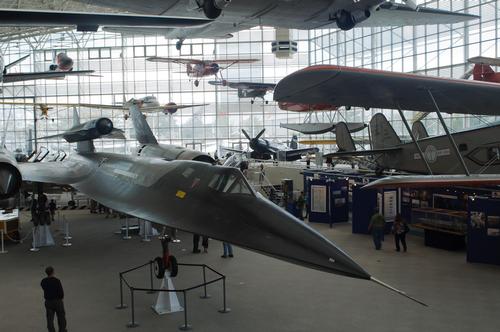 Museum of Flight in SeattlePhoto: InSapphoWeTrust (CC BY-SA 2.0) no changes made

The history of aviation and space travel comes alive at the Museum of Flight. It is the largest and most comprehensive aerospace collection in the west. The museum contains numerous full-size aircraft and spacecraft and over 19,000 artifacts, including instruments, textiles and models. The exhibits provide a vivid picture of the history of aerospace achievements, including the famous 'Flying White House', which transported Presidents Kennedy, Johnson and Nixon. 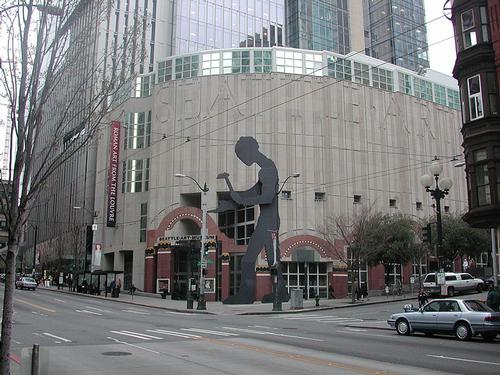 The Seattle Art Museum is a renowned art museum. It has a permanent broad collection with over 21,000 items from Asia, Africa, North West Coast Native America and Europe. Much attention is paid to modern and European painting and decorative arts. The SAM also has rotating exhibitions of international allure, free tours and lectures and is best known for the huge sculpture by Jonathan Borofsky, 'Hammering man'. 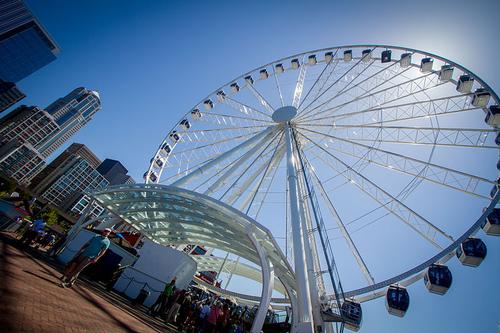 There is much more to see. Some of the must-sees in Seattle include the Pike Place Market, the Fremont Troll, the Hall of Fame (at the Seattle Center), the Central Library, and the Seattle Ferris wheel.