The state of Utah covers 220,080 km², of which 212,988 km² is land. The state lies in the Mountain Time Zone. In the east there are vast Indian reservations. Utah can be roughly divided into three areas: To the east is the Colorado Plateau, a rugged, mountainous and virtually uninhabited area. To the west is the Great Basin Region with flat areas separated by mountain ranges. In the middle of the state are the Rocky Mountains. Utah borders Idaho and Wyoming to the north, Nevada to the west, Colorado to the east and Arizona to the south. It also shares a corner with New Mexico in the south-east. This point, where Utah, Colorado, New Mexico and Arizona meet, is called Four Corners and is the only four-state point in the United States.

Central and Eastern Utah are dominated by the Rocky Mountains. The highest point is Kings Peak (4123 m). In the west there is the Great Salt Lake and large salt plains. Many speed records have been broken there during tests conducted on the extremely flat and desolate surface. The Colorado River flows through the southeast of the state.

Utah is home to a number of National Parks, including Bryce Canyon and Zion. 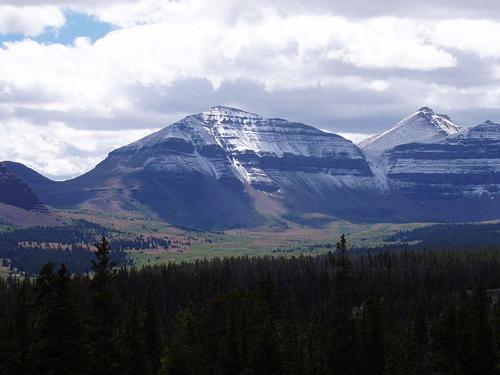 Utah has a dry continental climate, which is characterised by hot summers and harsh winters. There is a clear difference in climate between the mountainous area in the north and east and the lower desert area in the south and west. In the northeast, there is a lot of snow between November and April, while the southwest has a pleasant climate all year round. The hot summers are particularly pleasant thanks to the low humidity of the air, but late spring and early autumn are also ideal times to visit Utah.

The warmest months are June, July, August and September. The months of November, December, January, February and March are the coldest.

The flora of Utah is extremely varied due to the varied landscape, the difference in altitude and the climatic differences. More than four thousand different species of plants and trees grow here.

The largest part of Utah lies between one thousand and two thousand metres above sea level. Here you will find a vegetation pattern that is characteristic of Utah's high-altitude drought areas.

Above two thousand metres this picture changes. Then the Utah juniper and piñon pines give way to yellow pine, Colorado silver fir, Douglas fir and American rattlesnake (aspen). The Utah state flower has been the lily Calochortus nuttalli since 1911, the state tree has been the blue spruce since 1933.

Utah has a richly diverse fauna. In the forested areas, the mule deer and the grey fox are particularly numerous. Black bears, red lynxes and silver badgers are also found in these areas. The Utah state animal has been the wapiti since 1971.

The Utah state bird has been the prairie gull since 1955.