The state consists of 137 volcanic islands (most of them small and uninhabited) in the middle of the Pacific Ocean, the most important of which are the Hawaiian Islands, an archipelago of 19 islands. There are 8 main islands, from west to east: Ni'ihau, Kauai, Oahu, Molokai, Lanai, Kaho'olawe, Maui and Hawaii (the largest island). Together the islands cover an area of 16,650 square kilometres. Hawaii is part of the United States and is surrounded by the Pacific Ocean. 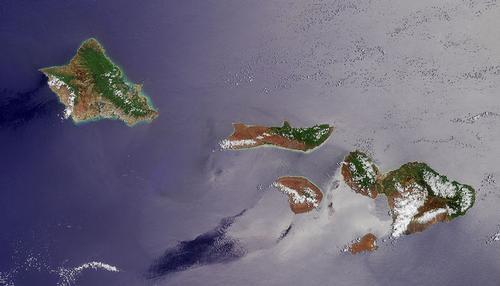 The landscape is very diverse and each island has its own characteristics. Beautiful beaches alternate with mountainous areas and vast grassy plains. The dry mountain areas are mainly found on the slopes of the leeward side. At an altitude of twelve hundred to two thousand metres, there are marshes, which were formed by heavy rainfall. Furthermore, there are lowlands with rich grass plains.

The coastal areas complete the diversity of landscapes. The soil is very fertile as a result of the volcanic eruptions. At 4205 metres, the Mauna Kea on Big Island is the highest mountain.

The islands are of volcanic origin: they are situated on a so-called hotspot, where magma from the bowels of the earth comes out as lava. As the earth's crust moves relative to the hot spot, a line of islands was formed from west to east, with the oldest, dead volcanoes in the west and the youngest, active ones in the east. Currently, the Kilauea and Mauna Loa volcanoes on the largest island of Hawaii are still very active; the same may be true of Hualalai. Mauna Kea is a dormant volcano. Kilauea, in Volcanoes National Park, has almost continuous eruptions, which can be visited by tourists. Mauna Loa has a new eruption about every 20 years, for Mauna Kea an eruption every 4000 years is not excluded. 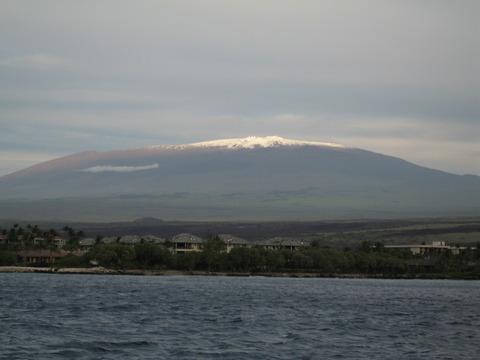 Another 30 km to the east, far below the surface of the sea, a new volcano, Loihi, is building a new island that will rise above sea level in 10,000 years.

Mount Haleakala (House of the Sun), a volcano on Maui, is particularly popular with tourists. It is easy to drive the 55 km long road to the top in a rented car. There is a car park at the very top of the mountain. Many tourists go to the top of Haleakala to admire the sunrise or sunset there. The volcano is part of the Haleakala National Park.

The national flower of Hawaii is the hibiscus (Malvaceae) or, in Hawaiian: pua ma'o hau hele. Hawaii has an almost unique flora: 89 percent of the plants are found only on Hawaii. The reason for this is that the archipelago is isolated. The seeds that reached the country from all over the world have adapted to the land in such a way that they differ significantly from their original form. For example, on Hawaii you will find the kokio (a variation of the hibiscus) and akala (typical Hawaiian raspberry). The flower that symbolises the Big Island is the pua lea, a kind of red blossom.

The vegetation on Hawaii is best described by landscape. At coastal level there are palms, shrubs and tall trees. In flat areas, swamps often form, where marsh vegetation (herbs, (cyper) grasses and shrubs) thrives. Bogs are found at altitudes of twelve hundred to two thousand metres, where there is a lot of rainfall and the drainage is not good. At altitudes above three thousand metres it is dry. Here shrubs grow, such as silver swords and the Hawaiian kupoa.

In the past only a handful of animal species lived on Hawaii. At the time of contact with the rest of the world, Hawaii had seventy species of birds. More than half of these species are now extinct. Many animals, like the plants, have adapted to life on the islands, resulting in new species. The national animal, the Hawaiian goose or nene, for example, looks like the Canadian goose, but has adapted to walking on lava. In many cases, it is impossible to establish the ancestry of the birds, due to the distant evolution.