Around the declaration of independence in 1776, a written Constitution was drawn up for the first time in world history, a constitution with principles of state structure. On September 17, 1787, the United States Constitution officially went into effect.

The United States Constitution is based on some principles that were considered important in the thinking of the Enlightenment:

-public administration based on federalism

-the Anglo-Saxon tradition in public administration

Since 1787, several dozen amendments to the constitution have been introduced, the so-called "Bill of Rights". It establishes human rights, including freedom of religion and media and the prohibition of slavery.

The central point of the Bill of Rights is the unitary idea, which, however, is translated into a system of "checks and balances", which regulate the relationship between the federation and the federal states and the separate relations between the legislative, executive and judiciary. 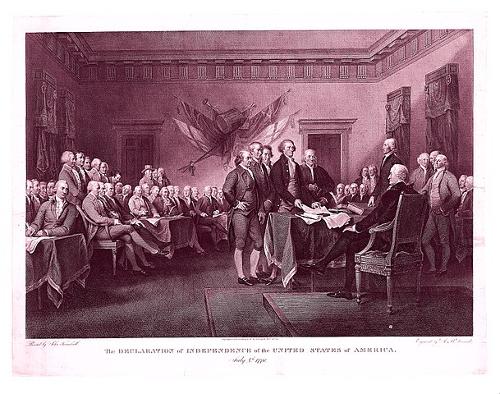 Signing of the Declaration of Independence, USAPhoto: Public domain

Legislative power is held by the Congress, consisting of two Chambers, the Senate and the House of Representatives.

Each state is represented in the Senate by two members, who have six-year terms of office. Every two years, one-third of senators are replaced after elections.

The House of Representatives has 435 members, who serve for two years. Each state must have at least one delegate in the House; the remaining seats are divided among the states depending on the population.

All members of the House and Senate can submit bills, but to become law, bills must be accepted by both Houses and signed by the President. The President still has the right of veto, but this can be overruled by a two-thirds majority in both Houses of Congress. 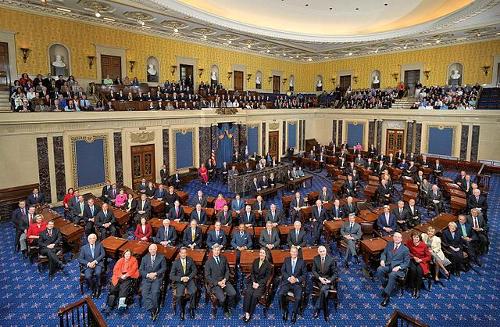 The two Chambers in Congress have even more functions. The House of Representatives decides (on the basis of one vote per state) if no candidate is elected in the presidential election. The right to impeachment means that a special procedure can be initiated to remove the president and, for example, federal judges from office. The House then decides on the accusation and the Senate finally (by two-thirds majority) gives the final verdict. Furthermore, the Senate has the right to approve the closing of tracts and appointments to - most senior - government positions by the President. Customary law makes members of Congress represent the individual interests of their constituents in the national government.

In practice, power in Congress rests with the chairmen of the main committees and with "leadership". The leadership consists of the group leaders and their right hands (whips) and the elected chairman of the House, the so-called "Speaker". The Speaker is the foreman of the largest party and the most powerful figure in the House. The Senate is chaired by the Vice President of the United States, who, however, has a less central position. 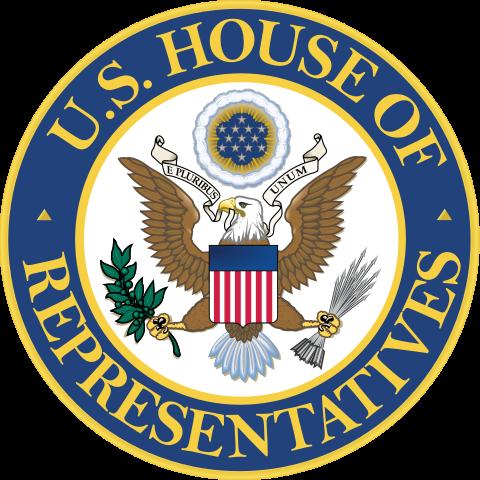 Seal USA House of RepresentativesPhoto: Ipankonin in the public domain

The executive power is in the hands of the President, who is elected for four years in general elections (voting age from 18 years) through a college of electors, appointed by state in proportion to the number of state seats in Congress. Re-election is only possible once.The system works in such a way that the winner in a state gets all the electoral votes, no matter how small the victory. The deputy of the president, the vice-president, is also elected this way.

The president has six functions or powers:

a. He is head of state. This includes the promulgation of laws and the right to pardon.

b. He is head of the executive branch. The President is the head of government, he has the task of overseeing the implementation of the laws, and he is head of the federal administration. He also has the right to be appointed and dismissed with regard to important positions in the board, a considerable political means of power.

c. He is commander in chief of all armed forces and has war powers. He decides on deploying troops abroad and in his own country. The "right to declare war" is reserved to Congress, but the right to "make war" to the President.

d. The administration of external relations rests with the President. Congress also has important powers in this regard, notably the right to approve Senate treaties. However, the president can circumvent this by concluding not an agreement in a formal sense, but an 'executive agreement', which evades this participation. In addition, the Supreme Court has ruled that it has "inherent power" in this area. For example, traditionally the position of the President in this area has been predominant: from the Monroe doctrine ("America for the Americans") to the Nixon Doctrine (on the subsidiary nature of America's "police role" in the world), US foreign politically is determined by the White House. Seal of the President of the USAPhoto: Unknown author in the public domain

e. He is an initiator of legislation. Although legislative power is vested in Congress, the President still plays a leading role in this area. The constitution requires the president to address Congress periodically, notably through the annual "throne speech": the State of the Union. In practice, important bills have their origin in the executive branch.

f. He is the head of a political party. The President is automatically the leader of the political party that nominates him. This is done in a "national convention" of that party. Delegates to that meeting are often appointed on the basis of party political primaries in all states.

Parliamentary responsibility of the government, such as in Western Europe, does not exist in America. The president is unyielding (subject to impeachment) and that also governs his actions as head of government. The constitution mentions 'heads of departments', but the cabinet has almost a function entirely derived from the president. The importance of the cabinet declined, especially after the Second World War. For the current political situation see chapter history. 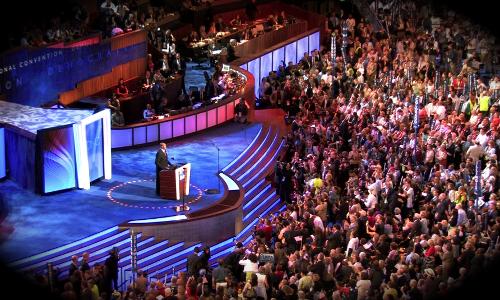 The conservative influence of the Mormon Church in Utah, which emphasises traditional values such as hard work, discipline and a close-knit family life, is palpable everywhere. The fact is that in the 21st century, Utah is one of the most prosperous states in the United States of America.

Large parts of the state are used by the US military.

Utah's state symbol is a beehive, which well symbolises the industriousness of its inhabitants.

The agricultural sector was an important means of livelihood, especially in the early days. The Mormon pioneers thus provided for their first necessities of life. Today, Utah has more than 13,000 farms.

The industrial sector is now the most important source of income in Utah. Electronic equipment, software, industrial machines and precision instruments are some of the products manufactured here in Utah. Tourism is taking an increasingly important place in Utah's economy.