Dallas is the third largest city in Texas and the ninth largest city in the United States. According to the 2010 census, the city had a population of 1,197,816 inhabitants. The metropolitan area had a population of 6,477,315 and is the fourth-largest metropolitan area in the United States. Dallas formally became a city in February 1856. The city's economy is based primarily on banking, commerce, telecommunications, computer technology, energy, and transportation. Many large companies are headquartered in the city. Dallas is a center of the oil and cotton industry with a well-developed infrastructure, especially good rail connections. Dallas / Fort Worth International Airport is one of the largest and busiest airports in the world. 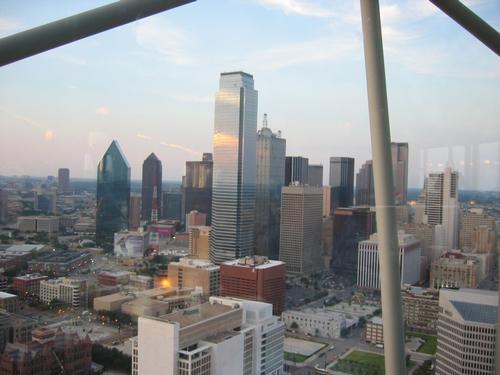 Dallas is the capital of Dallas County. The city extends to neighboring Collin, Denton, Kaufman and Rockwall. Dallas has a total area of 385 square miles (997.1 km2). Dallas occupies one fifth of the much larger urban area known as Dallas-Fort Worth Metroplex. A quarter of all Texans live here. Dallas and the surrounding area are mostly flat, the city itself lies at an altitude ranging from 137 to 168 meters. 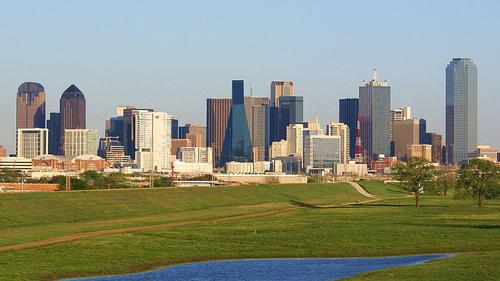 Dallas was founded along the Trinity River in a location known as The White Rock Crossing. The Trinity River is the major waterway that runs southeast through the city to Houston. The river is well protected against flooding with a 15 meter high bank on both sides of the banks.

Dallas has a humid subtropical climate. It is located in a region with warm, dry winds from the north and west in the summer. Then temperatures rise to well above 38 °C. The Dallas region is one of the hottest in the United States during the summer months, comparable only to Arizona, southern Nevada, and southeastern California.

Winters in Dallas are generally mild, with daytime temperatures ranging between 13 °C and 21 °C, and at night temperatures can drop between -1 °C and 7 °C. Strong cold fronts sometimes pass through the Dallas region with a significant drop in day and night temperatures. These cold fronts are known as "Blue Northerns". It usually only snows once or twice a year. 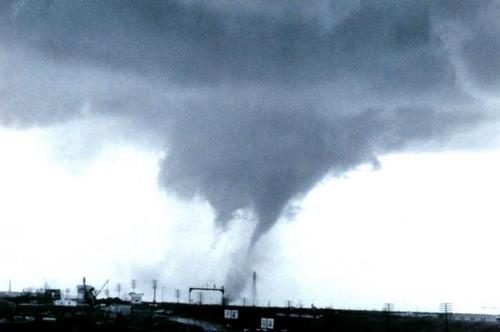 In spring and autumn, the weather is pleasant with mild temperatures. Many different flowers grow, including wildflowers in the area. The weather is usually pleasant from late September to early December. In the spring, southern fronts collide with warm, humid air currents from the Gulf Coast. There are sometimes heavy thunderstorms with lightning, downpours and tornadoes. Tornadoes are probably the greatest natural threat to the city. Dallas is located near the center of “Tornado Alley”.

The first settlers in Texas were the native Caddo tribes. Later, the country was claimed by the Spanish Empire as part of the Kingdom of New Spain. 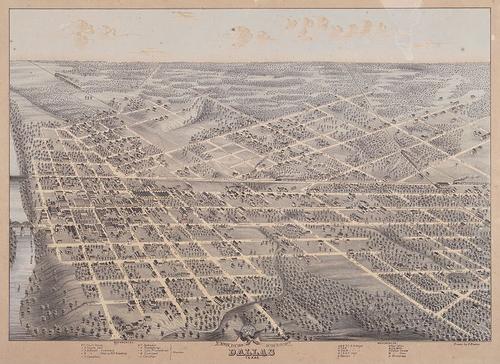 In 1819, Dallas became Spanish territory. The area remained under Spanish rule until 1821, when Mexico became independent from Spain and the Dallas area became part of the Mexican state of Coahuila y Tejas. In 1836, the Republic of Texas became independent. In 1841 John Neely Bryan founded a permanent settlement near a river and named it Dallas. The Republic of Texas was annexed by the United States in 1845. Dallas was formally recognized as a city in February 1856.

The aviation industry developed in Dallas during the 1st World War. The Great Depression backfired Dallas. In 1931, more than 18,000 people were unemployed. In the 1930s, an oil field was discovered 100 miles east of Dallas. That was the main reason why Dallas suffered less during the Depression. This gave the city a great advantage. Banks provided loans to develop the oil fields, and Dallas became the financial center in East Texas. 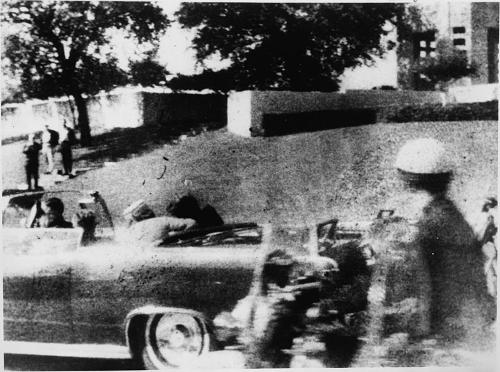 On November 22, 1963, President John F. Kennedy was assassinated in Dallas. It was a great shock and tragedy for the entire nation. Lee Harvey Oswald was arrested for the murder. Two days later, he was murdered by Jack Ruby, a Dallas nightclub owner. Dallas will never forget this tragic assassination of an American President. The Kennedy Memorial was built in 1970. 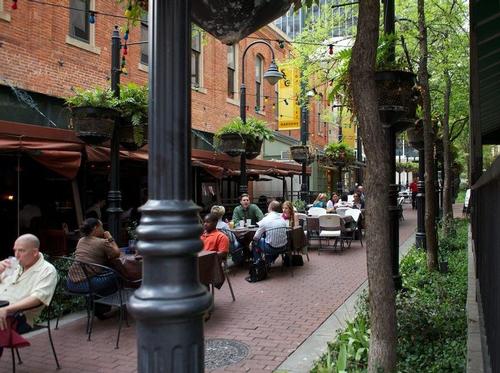 Downtown Dallas is the center of the urban revival of the city. Along with Oak Lawn and Uptown, these are areas with numerous shops, restaurants and exciting nightlife. Downtown Dallas has a variety of attractive neighborhoods, such as the West End Historic District, the Arts District, Main Street District, Farmers Market District, City Center Business district, Convention Center District, and Reunion District. 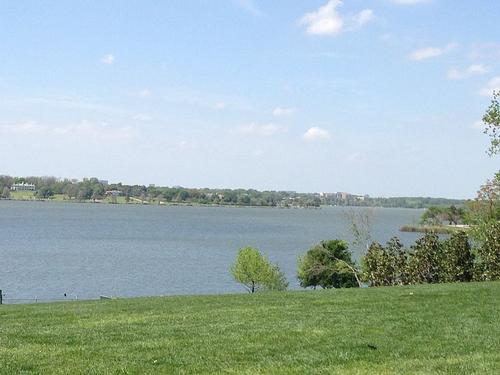 At the beginning of the 20th century, the White Rock Lake reservoir was built as the primary water supply for Dallas. The lake and the surrounding park is a popular place for recreation not only for residents, but also for tourists. The park extends along 66 acres (267,000 m2). In the park, the famous Dallas Arboretum is located on the eastern shore of the lake. White Rock Creek flows into White Rock Lake and then to the Trinity River southeast of Downtown Dallas. 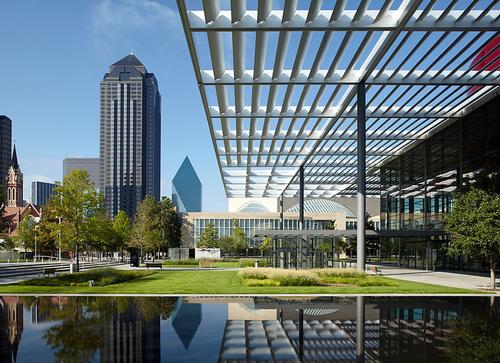 The Arts District in the northern part of Downtown is the area of famous museums and art galleries such as the Dallas Museum of Art. The Trammell Crow & Margaret (with collections of Asian art) and the Nasher Sculpture Center are also museums worth visiting. The Morton H. Meyerson Symphony Center is home to the world famous Dallas Symphony Orchestra.

The Dallas Museum of Art is one of the city's most appealing art museums with a beautiful collection of African, American, European and Asian art, as well as a special collection from the Pacific Islands. A beautiful combination of contemporary art and decorative art makes it a great place to spend an afternoon exploring these treasures. The Dallas Museum of Art takes up an entire block in the Arts District and is over a hundred years old, it was founded in 1903. 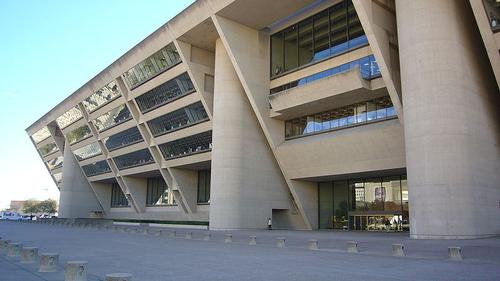 Tourists visiting Dallas are often interested in late 19th and early 20th century architecture, as well as modernist and postmodernist architecture. A row of historic houses along Swiss Avenue contains all the colors and variants of Victorian neoclassical architecture. The Dallas Downtown Historic District has architecture from the 1880s to the 1940s. There are several modern residential towers more than 210 feet high. Excellent examples of modernist architecture include the Reunion Tower, the JFK Memorial, IM Pei's Dallas City Hall, and the Morton H. Meyerson Symphony Center. Good examples of postmodern skyscrapers are the Bank of America Plaza, the Renaissance Tower, the JP Morgan Chase Tower and the Comerical Bank Tower.