While the state does not support one particular religion, and everyone has the right to believe it or not, America nevertheless underlines its commitment to religion in general: the President takes his oath of office on the Bible, the House of Representatives begins each session with a prayer, and in court the witnesses seek God's help when taking the oath.

This deep-seated religious foundation of American society is historically easy to explain. European settlers brought their religion with them; some groups had even fled from Europe to escape persecution.

These people looked for a place where they could apply their often strict rules of life, and behaved very puritanically, a trait that can still be found in American society today. However, not every group was able to immediately experience its faith freely: people were often intolerant of dissenters. In the end, everyone found their place and was able to keep their conviction. 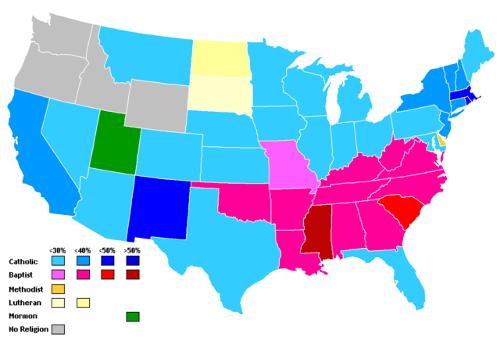 Religions in the USAPhoto: Verrai in the public domain

After the war of independence, religious freedom was incorporated into the constitution and a complete separation of church and state was carried out (1791). About 30% of the population is Protestant. Protestantism is highly polarized with extremes of fundamentalism and liberalism (liberalism). There is a wide variety of Christian denominations with more than 250 churches, faith communities and religious groups.

In the 1970s, various anti-institutional movements such as Youth for Christ and Jesus People came to the fore; in the 1980s, churches of very fundamentalist character were increasingly evangelizing through television (the electronic church).

Baptists
Baptism developed independently from a mother church in America from 1639-1641. The main characteristic of Baptism is the emphasis on religious freedom. Many groups prefer to call themselves "associations" or "congregations" than churches.

One becomes a full member through the ritual of adult baptism by immersion. The decentralized structure means that, in addition to very progressive communities, there are also conservative fundamentalists. The Southern Baptist Convention, one of the largest Baptist conventions, was created in 1845 and represents the most conservative Baptists. Racial segregation has also created "black churches": the two largest have millions of members. 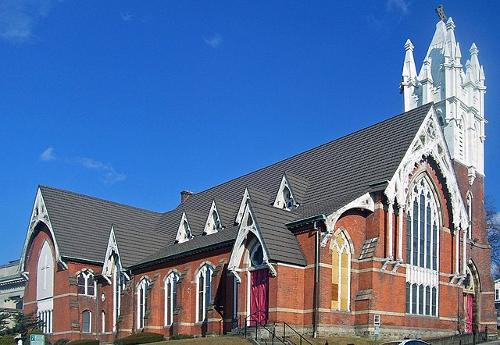 Methodists
The Methodist Church spread in America from 1761. It emphasizes personal experience and moral behavior, such as opposing "excessive entertainment" and calling for social service. 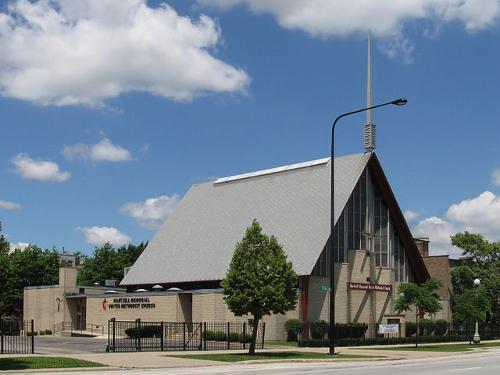 Lutherans
Three major groups of immigrants introduced Lutheranism to the United States in the 17th century. Until 1820, the composition of the Lutherans remained strongly ethnic (Germans and Scandinavians).

Each community is autonomous and has its own structure and liturgical forms. Some groups have bishops. Especially Dutch, Hungarians and Germans call themselves reformed, each with their own Reformed Chrurchues. The major reformed groups have been united in the United Church of Christ since 1957.

Episcopalists
Today's Episcopal Church used to be the Church of England, the first church to send European settlers to America. The approximately 3 million episcopalists are governed by bishops; functions such as pope or cardinals are unknown.

United Church of God
This church has about 1 million members, is Calvinistic of doctrine, but opposed to a hierarchical structure. Brouhht by the Pilgrim Fathers who arrived in the America in 1620.

Pentecostal movement
Various religious movement with the two largest groups being the Assemblies of God and the Church of God in Christ.

Christian Church
The Christian Church of Disciples of Christ is a Protestant denomination with approximately 800,000 members in the United States and Canada, making it one of the largest faith communities founded in America. They began operations in Kentucky and Western Pennsylvania from 1804-1809.

Mormons
The Mormons are a religious sect founded by Joseph Smith, to which the biblical history of America was revealed in 1823: according to these visions, the Indians are believed to be the descendants of the Lamanites, the lost tribe of Israel. "The Book of Mormon," in which this story is recorded, is the Holy Book of Mormons that calls itself the "Church of Jesus Christ of Latter-day Saints".

The Mormons first settled in New York State, then in Ohio, Missouri, and Illinois to escape the persecution they suffered.

Finally, they moved to Utah, where they founded the city of Salt Lake City, which became their permanent home. The Mormon Church, in which polygamy was allowed until 1890, has the vicarious baptism for the deceased, and in this context has compiled a database where the genealogical data from almost all over the world are stored. The Church also has its own banks, insurance companies, hotels, and communications media. 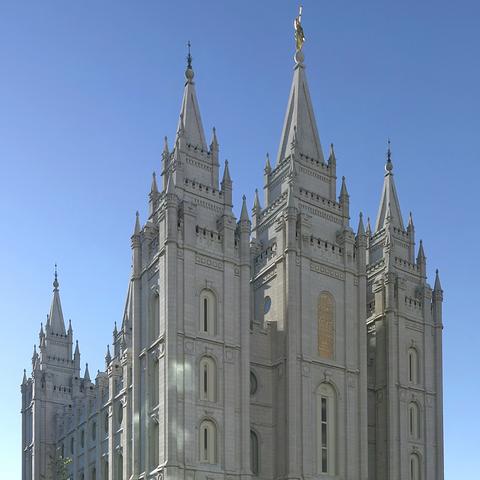 Roman Catholics
Catholic missionaries have been working in the United States since the sixteenth century. In 1634, the first Catholic settlers settled in the state of Maryland. Only from 1840 did the number of Catholics grow rapidly with the arrival of many Irish and Southern Europeans.

American dissenters have long been negative toward Catholics; It was not until 1961 that the first Catholic President, John F. Kennedy, of Irish descent was elected. Currently, the Roman Catholic Church is the largest church with about a quarter of the total population.

Two other important groups are the Greek Orthodox Archdioces of North and South America and the Orthodox Church in America.

Jews
After 1880, many Jews from Central and Eastern Europe came to America. They settled mainly in the large cities on the east coast and, for example, make up a quarter of the population of New York.

In addition to the group of Orthodox Jews, the Jewish community of the United States has two directions that deviate from traditional Orthodox Judaism, namely that of Reform Judaism and that of "conservative Judaism". Most of the Jews live in the United States except Israel. 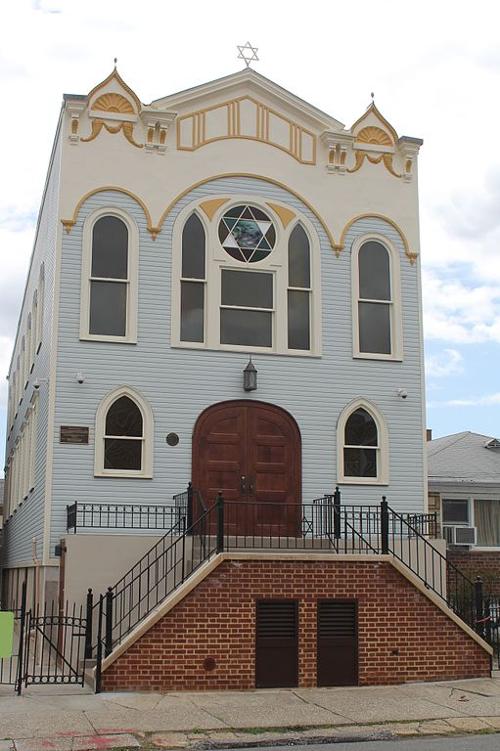 Quakers
The Quakers strongly believed in the equality of all human beings, renounced violence of any kind, and advocated tolerance towards other religions.

Currently, fewer than 60,000 quakers remain in the United States, united in the Friends United Meeting. The quakers have no preachers and hold meetings where they are together in complete silence for a long time.

Mennonites are followers of the 16th-century Dutch Protestant leader Menno Simonsz. The members of this anabaptist community believed that in principle everyone was a priest and had the spirit of God within them.

The likewise Mennonite Amish and Hutterites are very conservative communities, with an emphasis on self-reliance and separation, avoiding worldly obligations such as conscription. Most Hutterites live in South Dakota.

The Amana are among the so-called inspirationists, for whom God addressed his believers through prophets instead of priests. 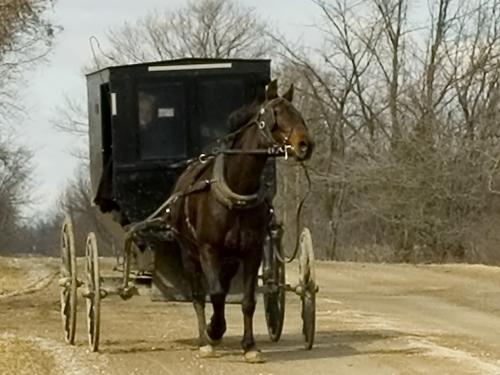 Mennonites still drive only horse and carriage in the USAPhoto: Alan Walker CC 2.5 Generic no changes made 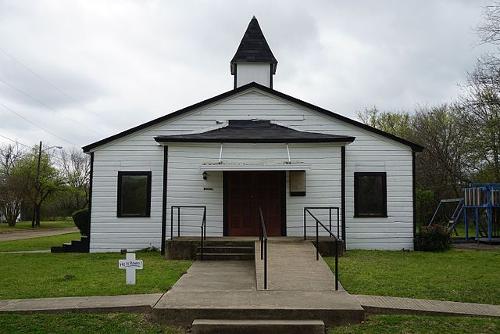 Many of these churches, of course, originated during the time of racial segregation. The fact that so many blacks are members of the Baptist churches is partly due to the active missionary activities that the Baptists have developed among the black population in the past.

Native Americans
The religion of the North American Indians is based on ancestor worship and takes them back to a mythical era in which a distinction was made between humans and animals and the earth and nature took on their present form, through spirits or spirits of deceased relatives. Nature in all its manifestations is also important for the spiritual life of the Indians. For example, almost every stream, hill or plain has a religious significance.
Striking is sometimes the integration of typical Catholic elements in traditional Native American beliefs, such as altar customs, the worship of the Virgin Mary and religious holidays. 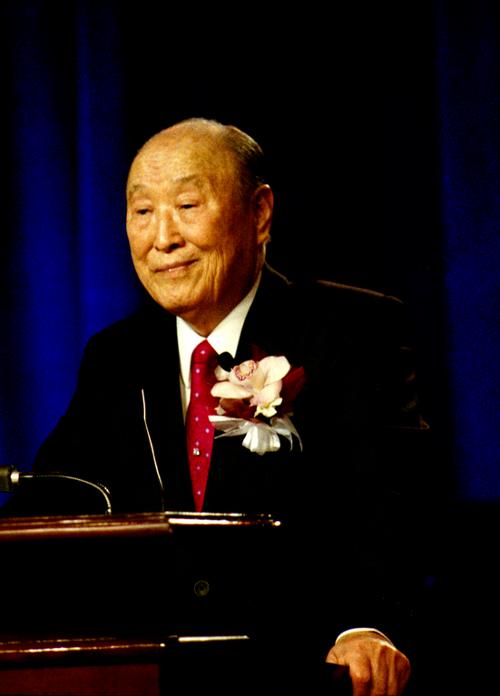