Andros, the most northerly island of the Cyclades, is typically a Greek island where the tourist can still completely unwind. The main reason for this is that Andros does not yet attract so many foreign tourists, it is mainly Greeks from the mainland who spend their holidays on Andros or go there on weekends. The mountainous Andros is an island with many springs, waterfalls and mountain rivers and a rich vegetation and beautiful beaches, including those of Ágios Pétros, Batsí, Chrissí Ámmos and Psíli in the northwest, Fellós in the west and Órmos in the east. 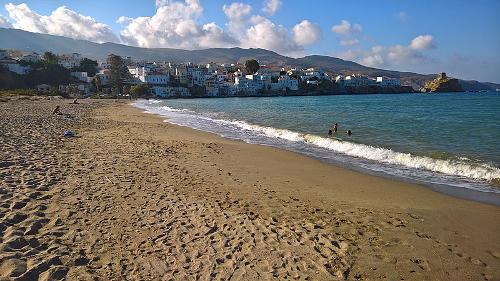 During the holiday period, July to September, many so-called 'panigír' take place, village festivals in which each village honors its own patron saint with music, dance, processions and as a highlight all residents have a joint meal on the village square. The capital, Andros Town, hosts a famous international choir festival every June with choirs from all over the world, and Batsí a dance festival with dance groups from all over Greece. A visit to the archaeological museum and a museum of modern art are certainly worthwhile.