Greece (officially: Elliniki Dimokratia = Hellenic Republic, or Hellás) is a republic in the extreme southeast of Europe. The total land area including all islands is 131,957 square kilometers. 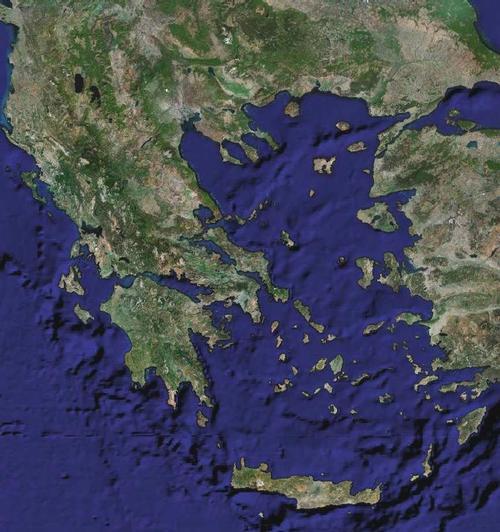 The coast of the mainland is almost 4000 kilometers long; Including the coasts of all the islands, the total number of coastal kilometers comes to about 15,000, the longest coastline in Europe after Norway. In many places the sea penetrates deep into the land, so that there are few areas more than about 100 kilometers from the coast. Almost 18% of the land area is occupied by more than 2000 islands and rocky points, often widely separated, of which only about 150 are inhabited, simply because they are too small. The islands are often private property of, for example, wealthy shipowners. The northernmost island is Thassos, the westernmost Corfu (Kerkira), the southernmost Crete (Kriti) and the easternmost Rhodes.

The Greek Islands are spread across the Ionian and Aegean Seas. Well-known Ionian islands are Corfu or Kérkira, Lefkas, Kefalonia and Zakynthios. The Aegean islands are in the majority and some well-known islands are Samothráki, Límnos, Lesbos, the Sporades, the Cyclades, Rhodes and Samos.

Greece is bordered to the north by Albania (282 km), Bulgaria (494 km) and Macedonia (228 km), and to the east by Turkey (206 km). To the west of the mainland is the Ionian Sea and to the south is the Mediterranean Sea. In the east, the Aegean Sea and the Sea of Marmara separate Greece and Turkey. Greece is thus surrounded by seas and it is remarkable that wherever one is, one is never more than 96.5 kilometers from a sea.

Geographically and socio-economically, the mainland can be divided, from north to south, into six regions:

Western Thrace is a mainly agricultural region in the northeast and borders Bulgaria and Turkey. The main city is Alexandroúpolis.

Macedonia is the area around Thessaloniki, the second largest city in Greece. Thessaloniki is an important industrial center with textiles, chemistry and the processing of agricultural products. The Chaldiki peninsula is important for tourism.

Epirus is located between the Albanian border and Macedonia. It is an economically poorly developed area where forestry and citrus cultivation are important. The mostly traditional industry is based on marble, textiles, wood processing and agricultural products. Furthermore, there is emerging tourism, especially around the national parks of the Pindos Mountains. Ioannina is the most important city in the region.

Thessaly is a predominantly agricultural region located in the eastern part of central Greece. It is the most fertile part of the country. This is due to the large plain on both sides of the Piniós River.
The industry is concentrated around the port city of Vólos and the centrally located Lárissa.

Central Greece is the area between Epirus and Thessaly in the north and the Gulf of Patras and Corinth in the south. In the southeast lies the socio-economic heart of Greece, the mountainous but fertile Attica. The capital Athens is located here and a third of the total population lives. Piraeus is adjacent to Athens with the largest port in Greece. The service sector and industry are strongly represented here. The rest of central Greece is highly agricultural, although the industry around cities such as Lamia, Thiya and Chaldika is increasingly developing.

The Peloponnese is the southern peninsula and separated from the mainland by the Corinth Canal. The mountainous Pelopponesos is characterized by a landscape of olive trees and cypresses. Agriculture dominates here too, but industry is starting to develop near the port city of Patras in the northwest.

The islands are divided into the following regions:

The Ionian islands with Corfu as the center and tourism as the main economic activity.

The northern islands in the Aegean Sea with agriculture and some tourism as main activities.

The southern Aegean islands with small-scale tourism in the Cyclades and mass tourism in Rhodes and Kos. Crete with Heráklion as its capital and agriculture and tourism as its main activities.

The mainland of Greece consists of 80% mountains and hills. The highest mountain is the sacred mythological mountain Olympus in central Greece at 2,917 meters.

Other high mountains are the Pindos (2637 meters), the Gramnos (2520 meters), the Parnassos (2457 meters) and the Taigetos (2404 meters). The Dinaric Alps run along the Adriatic coast of the Balkan Peninsula. In northwestern Greece, this mountain range merges into the Pindos Mountains, mainly of limestone, sandstone and clay, which is continued in the Taigetos Mountains of the Peloponnese and the archipelago of Crete, Karpathos and Rhodes. They are all young mountains that are highly fragmented and are therefore characterized by many deep bays and basin landscapes. The most famous bay is the 127 kilometer long Gulf of Corinth. This Gulf separates the peninsula from the mainland. Harbour at the Gulf of Corinth, GreecePhoto: H.P Burger CC 3.0 Unported no changes made

Flat areas are mainly in Macadonia and Thessaly, where agriculture and livestock are also possible. The plains are bisected by rivers, of which those in the north have the most water.

The rivers of Greece are of no significance for inland navigation because of the great drought; many large rivers are also dry in the summer. Many small rivers only have water in winter after heavy downpours.

The main river is the Achelóos, which has its source on the Pindos, with its tributary the Inachus. The Peneios has its source on the east side of the Pindos and has many tributaries, including the Enipeus and the Europos. The main river of Boeotia in central Greece is the Kephisos. In the Peloponnese, the Roephias has the largest catchment area and the most important river in Laconia is the Evrotas.

The largest lakes in the country are located in the north, including Ioánnina, Kastoriás and Préspa.