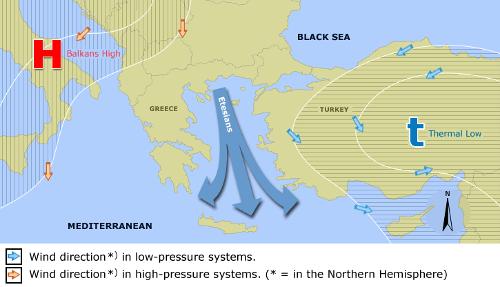 The climate of Greece is influenced by the division of the country, the course of the mountains between the east and west sides, the relief and the proximity to the sea.

The coastal regions generally show typical Mediterranean climatic features, namely a hot dry summer and a mild, precipitation-rich winter. Since this precipitation is mainly carried by westerly winds, the west side of Greece gets much more of it than the east side. In the northwest in the Pindos Mountains, an average annual rainfall is 1800 mm. In Athens, on the other hand, about 400 mm falls per year. There are also large differences in precipitation between the Ionian islands to the west of the mainland and the islands in the far east of the Aegean Sea.

In the inland mountain-lined plains of Macedonia and Thessaly, the continental influence is clearly beginning to play a role, which is reflected in the lower winter temperatures and in a wider distribution of rainfall throughout the year. Usually the precipitation falls in heavy showers and is therefore limited to a small number of days. Annual quantities fluctuate widely. Summers are hot and dry. Snow occurs in winter mainly on the mountain peaks of more than 1000 meters and in Thessaly. Athens has snowfall on average six days a year.

Greece has the warmest climate of all southern European countries with at least 300 sunny days per year. In August the temperature can reach 40 ° C and it often feels very unpleasant in combination with the air pollution. In general, January and February are the coldest months, July and August the driest, November and December the wettest.

The Etesian wind develops over the Aegean Sea in summer. It is a strong wind that blows over the Greek islands with a force of 7 or 8 Beaufort. In Turkey this wind is known as Meltemi.