Finds in the area around Kokkinokastro show that there must have been a human settlement on Alonissos more than 100,000 years ago. Alonissos is the only island in the Aegean Sea where such ancient remains of human settlements have been found. At that time, all the islands of the Sporades were still connected, what is now sea were then valleys and lakes.

It is believed that a Pelagic tribe lived on the island in prehistoric times, and that there may have been Cretan settlers during Minoan times. At the time, Alonissos was a farming island, with wine and olive oil as the main exports.

In classical times, Alonissos reached its economic and cultural peak. It produced high-quality wine, olive oil, and amphorae, and probably the god Posseidon was specially worshiped. 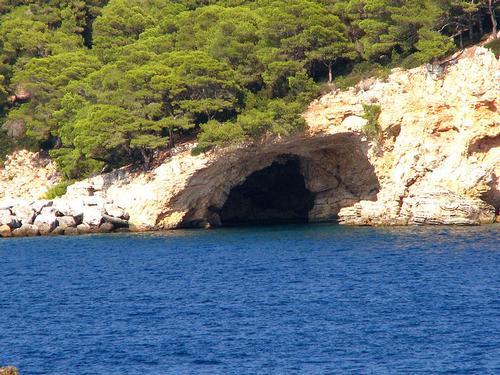 When the Romans conquered Alonissos in the 2nd century BC, they used the island as a place of exile for Roman citizens. Prisons and military bases were built on surrounding islands such as Youra. Due to the high taxes, the local population gradually became impoverished, and the island fell back to its original status as a peasant island, where the produced was used for its own population.

The history of Alonissos, which dates back to the 3rd century AD. Christianity at that time can be compared to the history of the islands Skiathos and Skopelos, because in the 4th century AD there were many conflicts over these islands over the ownership of the island between Athens and Philip II of Macedonia.

This continued during the Byzantine period, and the island was ravaged by pirate attacks during this period. During these centuries many churches and monasteries were also built in the area.

Like neighboring islands, Alonissos came under the Venetian rule of the Ghisi family in 1207, headed by the Baron of Ghisi. The Venetians repaired and fortified the fortress on the island, which was then suitable to withstand attacks from Arab, Italian and Turkish pirates. In 1538, Alonissos was occupied by the Turks, and all the inhabitants of the island were locked up in the fortress and allowed to leave the fortress after approval of the Turks. It was not until 1830 that Alonissos was liberated from the Turks and Alonissos became part of the new and free Hellenic State, along with the rest of the other Sporadian islands.

During World War II, many young men of the island were killed in mainland Greece , Macedonia and on the border with Albania. In October 1940, Alonissos was taken by the Italians, but in April 1941 the islanders were called upon to do their patriotic duty and oppose the occupation of their island. They fought on the front lines throughout the war period, but when the Germans relieved the Italians, they served their island in a different way. They joined the EAM (a resistance group), organized the safe transportation of Australians, English and Cypriots to the Middle East, and constructed an entire network of resistance across all of the Northern Sporades Islands.

Later, when the Italians they left the command and administration of the area to the Germans. Towards the end of the war, the Germans, with the help of traitors, began to destroy the EAM. On August 15, 1944, eleven members of the EAM were gathered in the village square and shot in front of many islanders, a display of lust for power that was typical of the German occupation.

In 1950, all vineyards on Alonissos were affected by a disease., and in 1965 Alonissos was hit by another major natural disaster. An earthquake destroyed almost all buildings on the island. In the 21st century, Alonissos focuses mainly on sustainable tourism.

See also the history of Greece.