Karpathos, together with the islands of Kassos, Saria and Armathia forming a small archipelago, is the second largest island of the Dodecanese after Rhodes. Dódeka means 'twelve' in Greek, so Dodecanese means 'twelve islands'. In reality, however, there are hundreds of islands and islets in this part of the Aegean Sea, south of the northern Aegean islands and east of the Cyclades, which is called the Carpathian Sea. The sea east and south of Karpathos is called the Libyan Sea, southwest of Karpathos is the Cretan Sea. 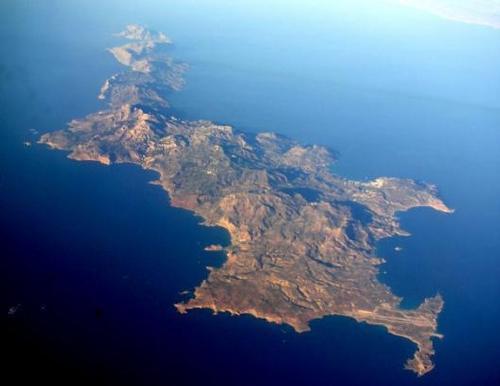 Karpathos from the airPhoto: Public domain

South-east of Karpathos, only 6 km away, is the practically treeless rocky island of Kassos, the southernmost island of the Dodecanese. Kassos, with the capital Fri, has an area of 66 km2 and has about a thousand inhabitants. The coast of Kassos is very rocky, with the rocky slopes running steeply towards the Mediterranean Sea.

The small, uninhabited island of Saria is located, at a distance of only 200 metres, just north of Karpathos. The highest point of Saria, the Pachy Vouno, is 630 metres.

Karpathos is a mountainous island, the highest peak is the Kali Limni in the middle of the island with an altitude of 1215 metres. In the north there is Profitis Elias with an altitude of 719 metres, in the south Chamali with an altitude of 685 metres. The south coast, with the Afiartis plain, is relatively flat. The Korifi Mountains, which are up to 700 metres high, separate the rugged north from the fertile and greener south. Near Olympos are the mountains Orkili (715 m), Kymaras (700 m), Stehoi (640 m), Malo (635 m), Koryfi (590 m), Oros (570 m) and Asia (540 m).

Karpathos has the reputation of being a dry and rocky island with few forests. But Karpathos is also known for its wild and varied landscape with beautiful pine forests, olive trees, small winding roads, coves with pristine white beaches and clear waters. The coast of Karpathos has three faces: the west coast is covered with pine trees, the north coast has a desolate and rough landscape, in the east the coast is rocky and steep with alternating creeks and cliffs. 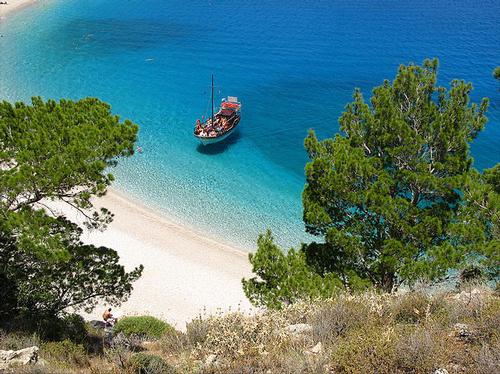 The island of Kassos is known for its many caves, including the Ellinokamara Cave and the Selai Cave.