Almost all inhabitants of Chios belong to the Greek Orthodox Church. Priests, unlike those of the Catholic Church, are allowed to marry and often have children. Nuns and monks, on the other hand, live a celibate life, no doubt one of the reasons why the ageing of the religious population is striking; many monasteries have already been closed and, given the high age of the remaining nuns and monks, this will only increase. 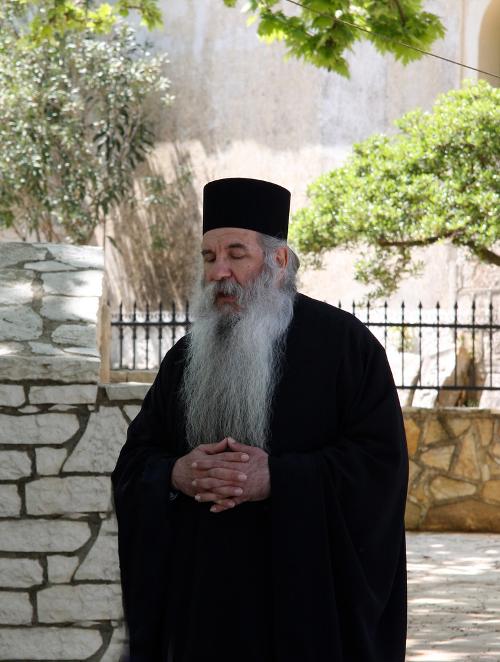 Like almost all Greek Orthodox churches, those on Chios are abundantly decorated with icons and frescos. The service, which may last up to three hours, is held around the altar, which is separated from the nave by an iconostasis. The iconostasis usually contains icons and images of saints.

In 1054, the Roman Catholic and Greek Orthodox churches each went their own way, disputing whether the Holy Spirit can emanate from God's son Jesus and God the Father, as Catholics and Protestants believe, or solely from God the Father, as the Orthodox believe. Orthodox also do not believe in the bodily ascension of Mary, which is why in Greece Ascension Day is called Mary's Day.

Despite the fact that Islamic Turkey is only a few kilometres away from Chios, there are almost no Muslims living on the island.

Aghia Markella: church dedicated to the holy martyr Markella, born in the village of Volissos and the patron saint of Chios. The church stands on a sandy beach 7 km north of Volissos. Markella died, murdered by her father, on a beach about twenty minutes walk from the church, where holy water is said to flow from the rocks ever since. This church is also a place of pilgrimage, and from the 22nd to the 24th of July, believers from all over Chios come to the church to join the procession and to pray to Saint Markella. At the place in the water where Markella is supposed to have been killed, there is a cross.

Aghia Matrona: Monastery near Mesa Didima, built in 1470 by the nobleman Roidis. Initially a summer house, it was transformed into a monastery after a dream about Saint Matrona of Chios. 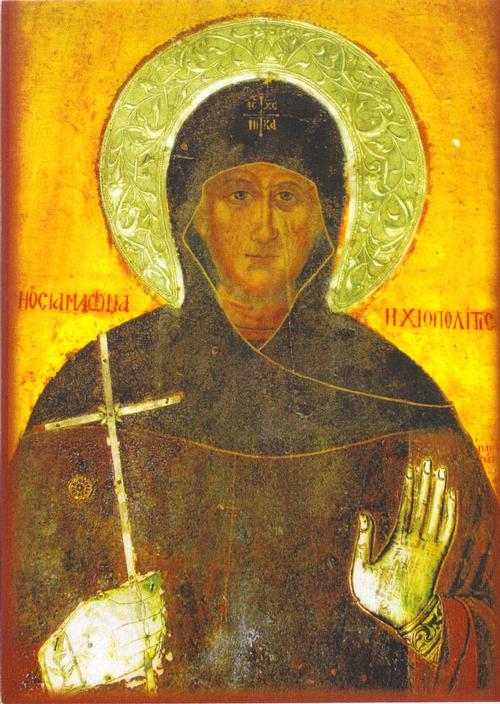 Aghia Paraskevi: one of the oldest churches in Chios.

Aghia Skepi: built by the monk Cornelios in Halkios in honour of the Virgin Mary.

Aghio Anárgyri: Monastery in Thymiana, built ca. 1639. The chapel was built in honour of Cosmas and Damian, twin brothers and doctors by profession. In Christianity, they are the patron saints of medical professions because they treated patients free of charge. Aghio Anárgyri means 'Holy Moneyless' in Greek.

Aghio Apostoloi: Byzantine church with frescoes from the 12th and 17th century, located in Pyrgi and built in octagonal style. It is only used on 29 June, Peter and Paul day.

Aghios Minas: Built between 1572 and 1595, the time of Patriarch Jeremiah II by the cleric Minas of Neohori. It has been a nunnery since 1932.

Aghios Nikolaos: built between 1785 and 1792 on the islet of Psara, west of Chios. From here the Psara-born independence fighter Constantinos Kanaris (ca. 1795-1877) launched successful attacks on an Ottoman admiral's ship in 1822 and other Turkish warships.

Aghios Pateron: The monastery of Aghios Pateron was built by three ascetics who were also involved in the construction of the famous Nea Moni monastery. The church was built in a cave in 1688.

Aghios Stefanos: Built in 1880 in honour of St. Stephen, who is considered the first martyr of Christianity. 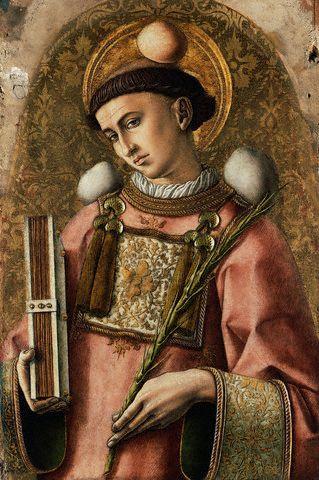 Aghios Taxiarchis: the largest church in the village of Mesta with a beautiful wooden iconostasis from 1886, dedicated to the archangels Michael and Gabriel. It is called the Large or "New" Church of Taxiarchis by the people of Mesta, to distinguish it from the smaller "Old" Church of Taxiarchis from 1412, which is also in Mesta.

Aghios Yiorgis: Monastery founded in 1770 by the monk Neilos in Kofina. It contains the tomb of the wise man Yiorgos Zolotas.

Isidorei: believed to have been built in the 7th century during the reign of Emperor Constantine IV Pogonatos. Located at Letsaina, Chios town.

Kournas: Originally a catholic monastery built between 1346 and 1566 on Mount Penthodom, a few kilometres from Karyes. In 1658 it was converted into an orthodox church.

Moundon: Monastery in Dievcha, northern Chios. In ancient times it was the most important monastery on Chios after Nea Moni.

Nea Moni: A UNESCO World Heritage Site, it means "New Monastery" and is located in the middle of Chios. It is an important example of Byzantine architecture, especially the octagonal style that is so characteristic of Chios as well as Cyprus. The mosaics in the monastery church are among the most important examples of Byzantine art in Greece. The monastery dates back to the 11th century and is dedicated to the Assumption of Virgin Mary. One of the financiers of the monastery was the Byzantine Emperor Constantine IX Monomachos (reigned 1042-1055) and his wife Zoe. 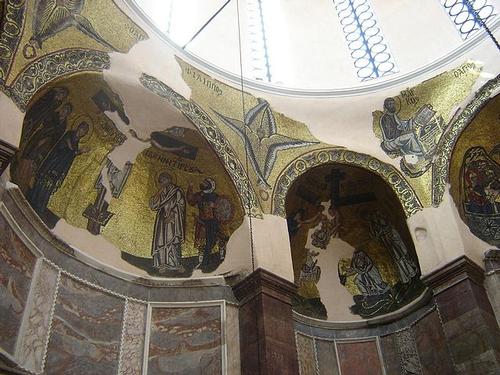 Panagia Krina: probably built in the 12th century in Vavili Kampochora. Gift of Eustathios Odratos and his wife Eirene Doucaina Pagomeni, members of the imperial court of Constantinople. Octagonal with 13th century frescoes.

Pera: near Kardamylla, founded in 1920 by Pan Antonopoulos.

Plakidiotisa: located in Kallimasia, founded in 1625 in honour of the Dormition of the Mother of God (Orthodox), in the Catholic Church of the Assumption of Mary or Our Lady.

Taxiarhon: located in Nenita and built in 1305 in honour of the Dormition of the Mother of God Mary.

Theotokis: A church built in 1694 in the mastic village of Pyrgi with beautiful "xista" decorations.

Bairakli Dschami: mosque in the Kastro area of Chios town.

The word myth is derived from the word "muthos", which first meant expression and was later often interpreted as "a spoken or written story".
Mythology (muthologia) is thus "telling stories", or a collection of myths, or the study of myths.

When writing originated in Greece, myths and legends were already anchored in oral traditions and later poets in particular gave the stories a different course. Greek mythology is very similar to other mythologies. For example, the Norse god Odin corresponds to the Greek Zeus and the Norse heroes often performed the same heroic deeds as their Greek colleagues. 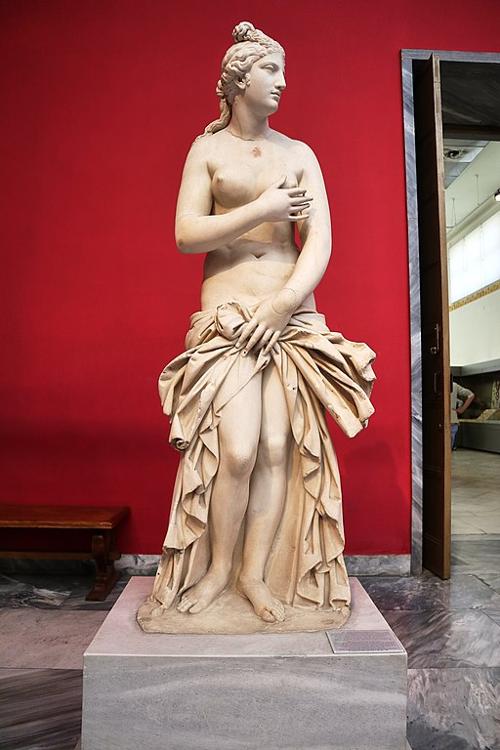 Aphrodite
Aphrodite is the goddess of love and beauty. She was born from the foam of the sea, which is also home to the main shrine dedicated to Aphrodite. She was married to Hephaestus, but preferred Ares for a lover.
Her son was Eros, the god of love. Aphrodite is depicted with the winged Eros and with doves. She was one of the Olympian gods. The Romans called her Venus.

Apollo
Apollo was the son of Zeus and Leto, and twin brother of Artemis. He is god of light, of medicine, music and science. Apollo is often depicted with a lyre in his hand. The main shrine dedicated to Apollo is located in Delphi, the most important oracle site of ancient Greece. Apollo was an Olympian god.

Artemis
Artemis was the twin sister of Apollo and daughter of Zeus and Leto. She was the goddess of nature and the hunt. She was also the tutelary goddess of pregnant women and is often depicted with a bow in her hand. She was an Olympian god and her Roman name is Diana.

Dionysos
Dionysos was a son of Zeus and the god of grapes and wine. He is often depicted with a staff that is wrapped at the top with ivy leaves. He was an Olympian god and his Roman name is Bacchus or Liber.

Hermes
Hermes was the messenger of the gods and a son of Zeus. He is also god of travelers, thieves and merchants. He becomesalways depicted with a travelers' cap and staff or a helmet with wings. His sandals also have wings. He escorted the ghosts of the dead into the underworld, Hades. 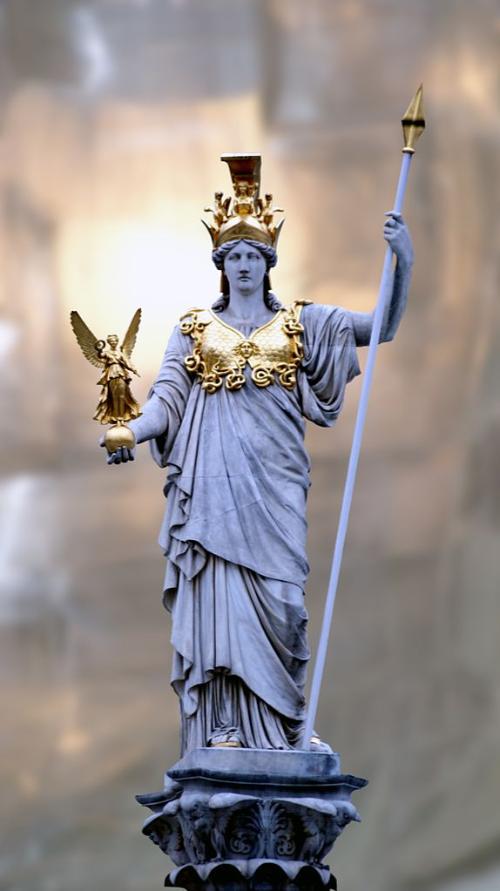 Pallas Athena
She is the daughter of Zeus only, because born from his forehead. She is the patron goddess of the artists and craftsmen, but also the goddess of wisdom and knowledge. In wartime Athena was also revered as a war goddess. She was the special guardian goddess of the city Athens and a guardian angel of Greek heroes such as Herakles and Odysseus.

She is often depicted wearing helmet and full armor. The owl, which symbolizes wisdom, was devoted to her. Pallas Athena has a sanctuary located in Athens: the Parthenon. She was an Olympic god and her Roman name is Minerva.

Poseidon
Poseidon is a helm of Zeus and is the god of the sea and guardian god of the sailors. His palace is deep under water and he is often depicted with a trident, with which he can stir the sea. The horse was dedicated to him.
Because the Greeks believed that the land floated on the sea, they also regarded him as the god who caused the earthquakes. Its Roman name is Jupiter.

Zeus
Zeus was the supreme god of the Greeks and the king of gods and men. He was also the god of the sky and the weather. He is often depicted with a lightning in his hand and is seated on a throne. Many demigods and heroes, such as Hercules and Perseus, have arisen from his love affairs with beautiful women. 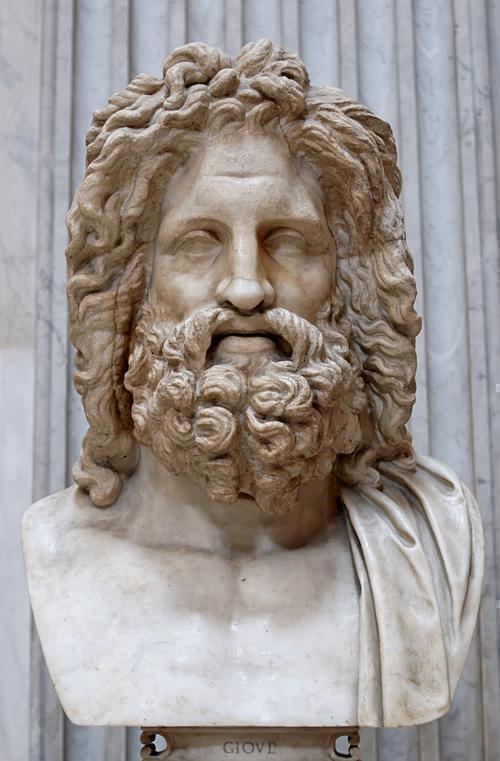