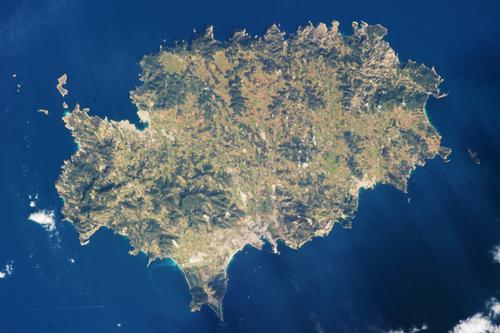 The Balearic Islands lie to the east of the Spanish mainland in the Mediterranean Sea; the Spanish city of Barcelona is approximately 300 kilometers as the crow flies. Alicante at about 185 kilometers. The capital of Algeria, Algiers, is only about 280 kilometers away. The water between Ibiza and mainland Spain is called the "Ibiza Canal" by the inhabitants of the islands.

Ibiza and Formentera are the two southernmost islands, located close to each other and separated by the seven kilometer wide strait "Es Freus". In this strait lie the uninhabited islands of Isla Espalmador, Isla Espardell, Islas de los Ahorcados and Islas Negras. In the bay of Cala d'Hort is the 381 meter high island of Es Vedrà, which some say is a reference point for UFOs.

The islands of Ibiza and Formentera are also called the "pine islands" or Pityusen, after the Greek "Nesari Pitoussai". Ibiza is also called "Isla Blanca" because of the many white houses.

The total area of Ibiza is 541 km2, Mallorca (3640 km2) and Menorca (702 km2) are larger. The island is 41 kilometers long from north to south and 20 kilometers wide from east to west. The coastline is approximately 210 kilometers long and scattered over fifty beaches. The coast of Ibiza also has a number of high cliffs. 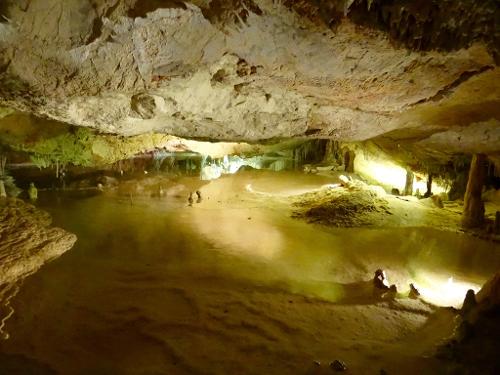 Little can be found in Ibiza from geological antiquity. During the Mesozoic Era (220-65 million years BC), sea levels rose and Ibiza was submerged. Lime deposits from the Cretaceous period can still be found on the surface. In the Tertiary, Ibiza was once again submerged and from this period there is still sand, clay and limestone to be found.

Approx. 8 million years ago, mountains such as the Alps and the Pyrenees were created and Ibiza (Els Amunts mountains) was also raised above sea level. Ibiza was then still connected to the Spanish mainland by a land bridge, but after the last ice age the water rose again and the Balearic Islands were created.

Due to the mainly limestone soil of Ibiza, many so-called karst phenomena can be found. Particularly to be mentioned are karst pipes or "aven" (funnel-shaped holes), karst caves, dolines (chain or funnel-shaped floors in karst plateaus) and uvula's (series of contiguous dolines). All these phenomena are caused by the combination of water and cracks and fractures in the rock. Rain and river water seeps down, dissolving the lime. Special are the underground water supplies or "aquifers", which are created by the water that penetrates through the porous limestone and flows to these places with an impenetrable surface.

The most striking appearances are of course the dripstone caves. The most famous stalactite caves in Ibiza are the Santa Cova, the Es Cuieram and especially the beautiful Cova den Can Marça. The Cova den Can Marça is a fossil dripstone cave, which means that no more water flows through the cave and therefore no more calcification takes place. All waterfalls and lakes are therefore artificial. 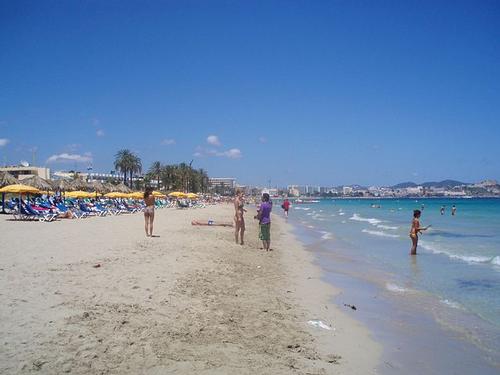 Over the past two thousand years, the coniferous and deciduous forests, fields and orchards have all been created by human hands.

The mountain ridge Els Amunts is very defining for the landscape of Ibiza. The highest mountain in Ibiza is 475 meters high Atalaya or Sa Talaiassa de Sant Josep. Other high peaks are the Llentrisca (414 m) and the Furnás (409 m).

Some important bays are Eivissa Bay and Portmany Bay. Here are also the main ports of Ibiza. The hinterland is protected in some places by a row of dunes. The coast is further dotted with inlets or "calas", where mostly sandy beaches can be found. The longest sandy beach in Ibiza is Platja d’en Bossa.

Ibiza has one river, the Riu de Santa Eulària, which is dry most of the year and is 11 kilometers long.