Andalusia is one of the 17 autonomous regions of Spain. Andalusia has 8.4 million inhabitants (2016) and is therefore the largest Spanish autonomous region by population and good for approximately 20% of the Spanish population. Andalusia just like Spain has a population density of approximately 96 people per km2. With almost 700,000 inhabitants, Seville is the fourth largest city in Spain and the largest city in Andalusia. Málaga is a close second with approx. 600,000.
Most Andalusians live in the big cities and on the tourist coastal region. The provinces of the same name have the greatest population density, the provinces of Córdoba and Granada are in the middle bracket, Jaén, Huelva and Almería are the least populated. 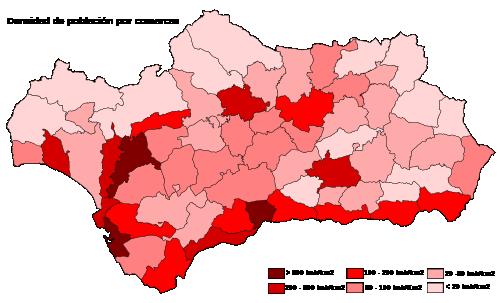 In the fifties and sixties of the last century, hundreds of thousands of Andalusians left the countryside of Andalusia to get recognition in the factories in the north of Spain and in Western European countries such as the Netherlands, Belgium and Germany. The 1970s saw the depopulation and aging of the rural areas of Andalusiaa due to the rapid rise of mass tourism, which provided many jobs in the coastal area. After the accession of Spain to the European Union in 1986, many Andalusians returned from abroad, but they too remained mainly in the big cities.

Flamenco is a type of music with tight rhythm structures, combined with a dance, originating from the south of Spain, especially from Andalusia, but the provinces of Extremadura, Murcia and Huelva have also contributed to the development of (different types of) flamenco. Flamenco, with among others (African)-Arabic and many gypsy influences, originated in the second half of the 19th century and every new generation adds something new to it. About 40 different styles can be distinguished, from the popular 'fandango' to the gloomy 'siguiriya'.
The basis of flamenco is the singing, the 'cante flamenco', which in the past was usually accompanied with rhythmic 'knocking', for example clipping fingers, clapping hands, staccato stamping with feet or using castanets. Nowadays flamenco is usually accompanied by a Spanish flamenco guitar (el toque), but also sometimes by flute, violin, piano and cello. The singing is also supported by the typical flamenco dance (el baile). In recent decades flamenco has also been influenced by Latin American music and especially Cuban music. More recently, influences can be seen from world music and even from rock, punk and hip-hop. Where the name flamenco comes from has never been resolved and many theories are circulating.

The development of flamenco can be divided into a number of periods:
-1800-1860 'La Etapa Primitiva' or primitive period
-1860-1920 'La Etapa Clásica o de los Cafés Cantantes' or classical period
-1920-1950 'La Etapa de laÓpera Flamenca' or the period of flamenco opera
-1950-now 'La Etapa de Renacimiento' or period of the rebirth

In Seville, there are the most and most varied possibilities to enjoy flamenco. 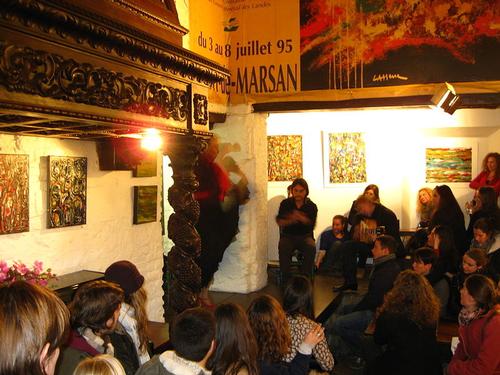 The greatest flamenco guitarist of the modern era was Paco de Lucía (1947-2014), born in the Andalusian Algeciras (province of Cádiz); one of the greats of the moment is Paco de Peña, born in Andalusian Córdoba. He ensured the popularization of flamenco, not only abroad but also in Spain itself. Together with the famous flamenco singer Camarón de la Isla (1952-1992) he developed the 'flamenco nuevo', a style variant of the flamenco guitar playing. Another famous singer was Manuel Ortega Juárez (1909-1973), also known as Manolo Caracol or 'El Caracol'. At the moment the sisters Fernanda and Bernarda de Utrera are among the best flamenco singers; famous flamenco dancers or 'bailaoras' were Eva Yerbabuena, Sara Baras, Juana Amaya and the Seville-born Cristina Hoyos; important flamenco dancers or 'bailaors' are or were Antonio Canales and Joaquin Cortés. 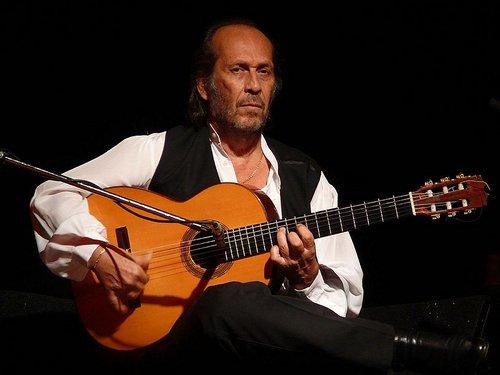 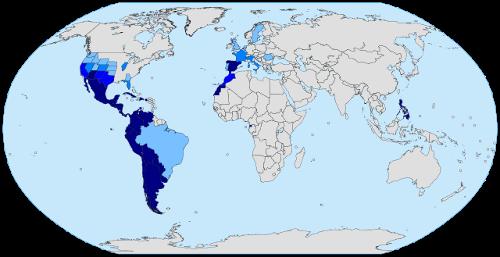 Castellano (Castilian) has been the official state language since around 1250. In other countries, Castellano is actually always called "Spanish". Castellano is a Romance language with many derivations from Latin, but also from many other languages. Spanish contains about 100 words that were brought to the peninsula by the Visigoths, among others. During the rule of the Moors, approximately 4000 words were introduced into the Spanish language. Furthermore, many words have been taken from French and Italian and more recently from English.

Examples of derivations are:

The main dialects of Castellano are Andaluz, Leonés, Navarro, Aragonés and Asturiano.

In addition to Spain itself, Spanish is spoken in the Canary Islands and the enclaves of Melilla and Ceuta in Morocco. Furthermore, in all South American countries except Brazil, Guyana and Suriname; all Central American countries except Belize; the Caribbean islands of Cuba, Puerto Rico and the Dominican Republic; Philippines and Equatorial Guinea. In the United States, there are large Spanish-speaking communities (30 million) in Florida and California. In total, Spanish is spoken by more than 300 million people. 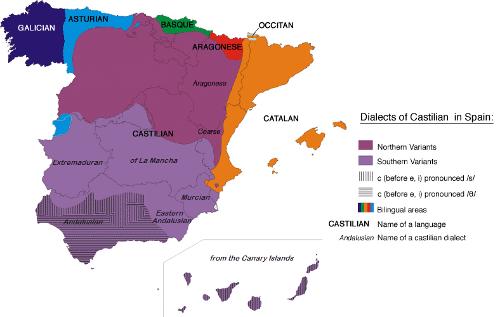 Spanish dialects mapPhoto: Stephen Shaw at the English Wikipedia CC 3.0 no changes made

Important regional languages were not officially recognized until the 1978 constitution. In the Franco period it was even forbidden to speak Euskera, Gallego or Catalán.

In the Basque provinces, Basque, Vascuence or Euskera is the second official language. It is spoken on both sides of the Western Pyrenees by approximately 2.5 million people. Only a quarter of them still actually speak the language. Six deviating dialects can be distinguished and therefore a kind of standard Euskera has only been established since 1968, which is also used in official publications.

In Catalonia, Catalan or Catalán is the first official language. Catalán is a language that lies between French and Castellano and is spoken and understood by about six million people. The two main dialects of Catalán are Mallorquín and Valenciano.

Gallego or Galego is heavily influenced by Portuguese and is spoken by about 1 million people, including some in Portugal. Since Galicia is an autonomous province, all official documents are written in Spanish and Gallego.

The Gypsies or Rom normally speak Romani, a language related to Sanskrit. In Spain, Romani is mixed with Spanish and is called "Lengua Caló".

To clarify the differences between Castellano and Euskera, Gallego and Catalán, below is a sentence from the constitution about the language: 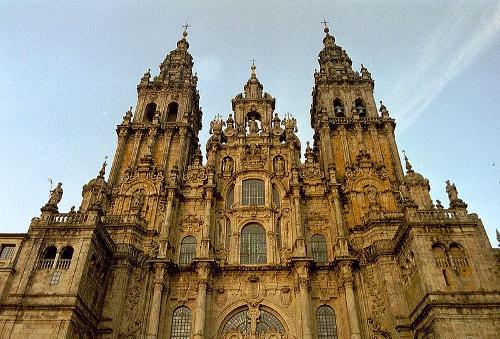 From the year 394, when Spain was still part of the Roman Empire, Roman Catholicism has been the state religion. It was Emperor Theodosius who took care of this. In 589 this status was reaffirmed by the Visigoth king Recaredo. In 711 Spain was conquered by the Moors and Islam was the main religion.

It was not until the early seventeenth century that the Catholic Church regained its powerful position and a close collaboration between church and state emerged. In 1931, at the time of the Second Republic, this undesirable situation came to an end. The church had become unpopular in all those centuries and this led to the death of about 6,000 clergymen in the Spanish Civil War. It was therefore not surprising that the church developed close ties with the Franco regime. Franco declared Roman Catholicism the state religion in 1939. 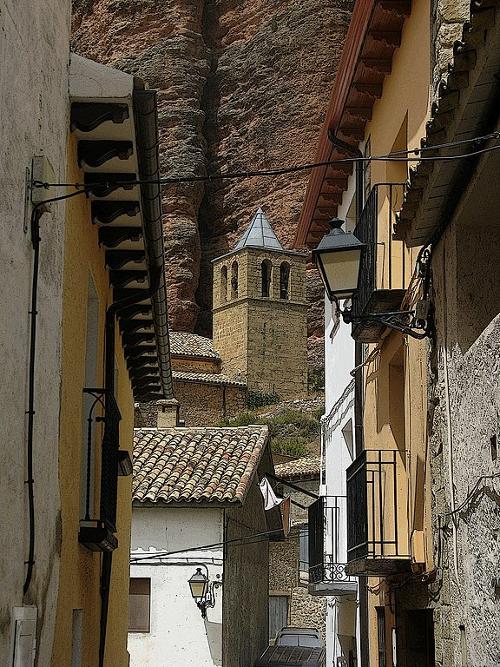 Involvement with the church has declined sharply in recent decades. More than 4 million people say they no longer adhere to any religion. The number of parish priests, monks and nuns is also declining sharply. Despite this decline, there is still massive participation in the important religious festivals. It is clear that at the moment it is more and more tradition instead of religious belief.

In the countryside there is a lot of participation in so-called "romerías", pilgrims / images to the shrine of a certain saint or to much revered images of Mary or Jesus. One of the best known is the Pentecostal romerías of Huelva, La Virgen del Rocío. Hundreds of thousands of pilgrims still flock here every year. 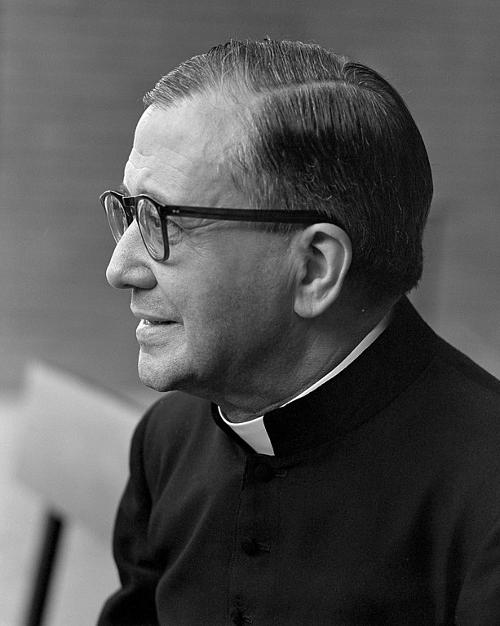 The organization "Opus Dei", also called "La Obra" in Spain, wants a better and more prosperous society, but strongly based on traditional Christian values. This organization was founded in 1928 by the priest Josemaria Escrivá de Balaguer whose maxims, the "Camino", published in 1931, serve as a guide for the supporters of the organization. He found that prosperity among the population was increasing, but that at the same time religiosity and secularisation increased.

Obviously, these types of organizations receive a lot of criticism, the question of which is true. Opus Dei is also accused of taking people away from their own responsibility and people who disengage or want to disengage do not have an easy time. Furthermore, strict confidentiality is required of the members about internal affairs.