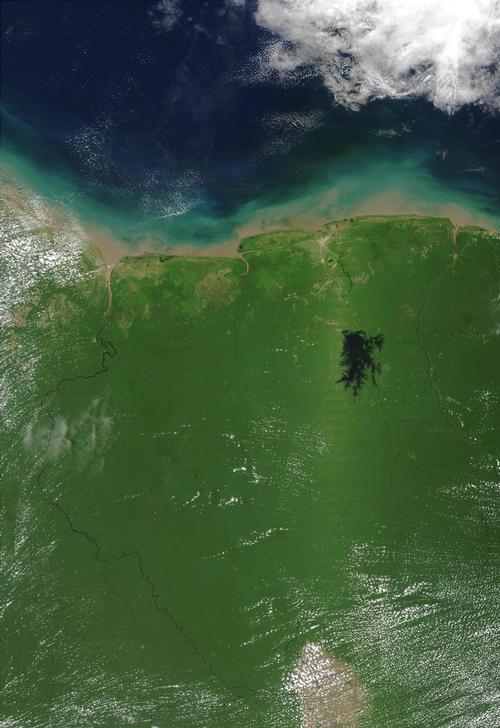 The landscape of Suriname can be divided into three parts that run from south to north:

The mountainous region of Suriname covers more than 80% of the surface and is part of the highlands of Guyana. In contrast to the situation in Guyana, virtually nothing remains of the sandstone cover within the borders of Suriname. Weathering has created an upper layer of widely varying thickness in the mountainous region. In the south stretch from west to east the Acara Mountains, the Border Mountains and the Tumuk-Hoemak Mountains. The latter chain forms the watershed between the rivers flowing to the ocean in the north and the rivers flowing to the south (Amazon). The mountains of central Suriname generally form the watersheds between the major rivers. The highest mountains are the Julianatop (1280 m) and the Tafelberg (1080 m) in the Wilhelmina Mountains.

To the north of the mountainous area, a low and undulating landscape extends, most of which consists of pure quartz sands that are highly permeable and barren. Destruction of the jungle has resulted in a real savanna being created here. The transition from jungle to savannah is usually gradual.

The coastal plain of Suriname consists of a southern part. There the weathering has been very intensive. As a result, almost all minerals have been dissolved and bauxite has been created. The northern part consists of younger deposits that have been created by the cooperation of the rivers and the sea. The sands brought in by the rivers and coming from the seabed formed beach walls with shells from the sea. Silt was deposited in the lagoons in between. This is how swamps were created. Landscaping created plantations here in the 17th and 18th centuries, which were later abandoned. The actual coast is a wide mud flat, so sandy beaches are completely absent. The coast of Suriname has to process large amounts of sludge from the Amazon. The siltation promotes the growth of mangroves and parwan forests. Silt is trapped between the roots. As a result, the mouths of the smaller rivers are increasingly to the west. 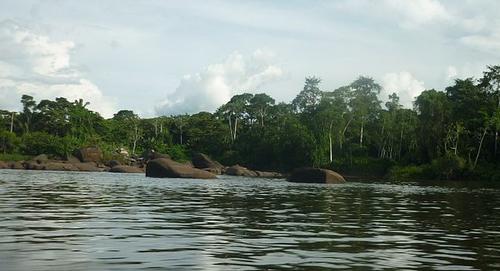 The drainage takes place via a number of rivers that run parallel from south to north.

The largest rivers in Suriname are the Corantijn and the Marowijne. Numerous islands occur in both rivers and the width is approximately 10 km at the mouth.

The other major rivers are the Coppename, the Saramacca and the Suriname (river). Smaller rivers include the Nickerie, the Commewijne and the Cottica. All rivers are easy to navigate in the low coastal region. Further upstream and on the small rivers one can make use of the great driving force of the flood. The water drainage is very large. In the rainy season, the rivers flood the wetlands. All rivers have rapids at the transition from the mountain country to the savannah.