The economy has traditionally been highly dependent on foreign countries. During the boom of plantation agriculture, the country relied economically on the export of tropical products (sugar, coffee, cocoa, cotton). In the 20th century, bauxite mining became increasingly important. The economy is dominated by mining, aluminum, gold and oil exports account for about 85% of exports and 25% of government revenues, making the economy very fragile and dependent on price fluctuations. Economic growth between 2010-13 has been around 4-5% per year, but the government budget has been hit by high inflation in 2010. In January 2011, the government devalued the currency by 20% and increased taxes to cover the budget deficit. reduce. As a result of these measures, inflation has declined to about 4% in 2013. Suriname's medium-term economic outlook depends on sound monetary and fiscal policies and the implementation of structural reforms to liberalize markets and promote competition. In 2017, the economy will grow by 1.9%. The GNP per capita then amounts to $ 14,900 per year. 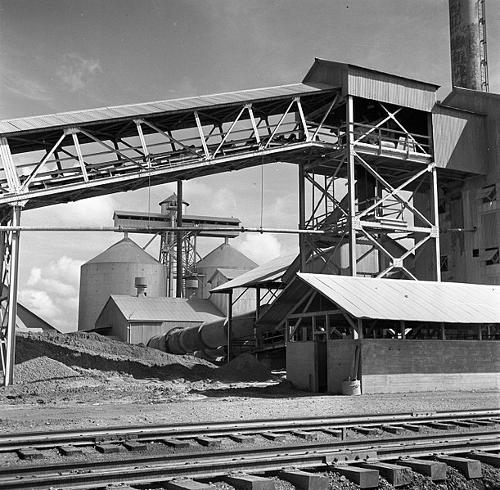 Approx. 11% of the working population is employed in agriculture, fishing and forestry. The sector accounts for 811.6% of GDP (2017). The cultivated area is limited to a small strip off the coastal plain. A significant portion of it is taken up by large farms. Palm oil production has shown promising growth since 1975. The government operates a number of banana plantations. The smaller farms are mostly run by Javanese and East Indians. The country provides for its own needs for sugar, citrus fruits, rice and bananas. Animal husbandry is of little importance. Although 85% of the territory is covered by forests, forestry and wood processing are of limited economic significance as it is difficult to do so in a commercially attractive way. Fishing on the rivers and in coastal waters has steadily increased in importance, especially shrimp fishing.

Apart from the bauxite processing, the industry is of little importance. There are some food processing, clothing and shoe companies, targeting the domestic market. Industry contributes approximately 31.1% to GDP; 11.2% of the active labor force works in this sector (2017). 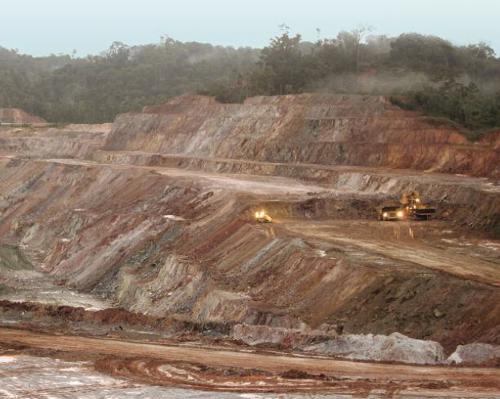 Bauxite mining is in the hands of the American Suralco and the Dutch Billiton Maatschappij (Shell). Suriname has long been the most important bauxite supplier (raw material for aluminum) in the world, but in 1989 Suriname came in eighth place. The most important sites are Moengo, Paranam and Smalkalden. Alumina factories are located near Paranam. Iron ore, nickel, platinum, tin, copper, manganese, diamonds and gold are mined on a small scale. Energy is generated by means of diesel engines. The hydroelectric power plant at Afobaka in Brokopondo district is the main energy source. Gas production is done by coal gasification. 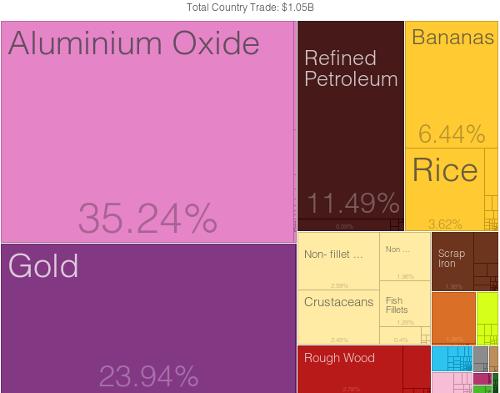 The main export products are gold, aluminum, oil and food. The main customers are Switzerland, Belgium, United Arab Emirates, Hong Kong and Guyana. Food, machinery, petroleum and means of transport are imported. The main suppliers are the United States, the Netherlands, China, and Trinidad and Tobago. The total value of exports in 2017 was $ 2 billion and the total value of imports was $ 1.3 billion. Suriname therefore has a positive trade balance. 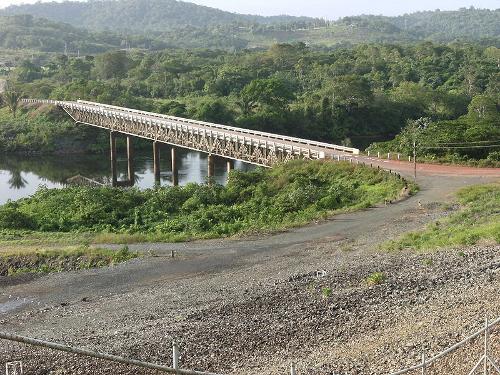 Bridge over the Suriname riverPhoto: Mark Ashmann CC 3.0 Unported no changes made

The road network extends over approximately 9000 km, of which approximately 25% is paved. As a remnant of a larger railway network, there is an approx. 86 km long railway from Onverwacht (near Paramaribo) via Zanderij to Bronsweg on the Van Blommesteinmeer. In 1978, as part of the development of Western Suriname, an 80 km railway line was opened between the Bakhuys Mountains and Apoera on the Corantijnerivier. Both lines are no longer in use. The rivers, with a navigable length of 1500 km, have a function for inland transport. The largest seaport is Paramaribo.