Both departments are administered by a prefect representing the government. Corsica has its own parliament, the Assemblée de Corse, with far-reaching decision-making powers in areas such as culture, transport, environment and education. A small part of the population still strives for an independent Corsica. Bombings are the most serious manifestations of this endeavor. The sad low point was the assassination attempt on Prefect Érignac in February 1998.

However, most Corsicans are aware that an independent status would be disastrous for the economy, as Corsica will always be highly dependent on the government in Paris for that matter. For the current political situation of France, see chapter history. 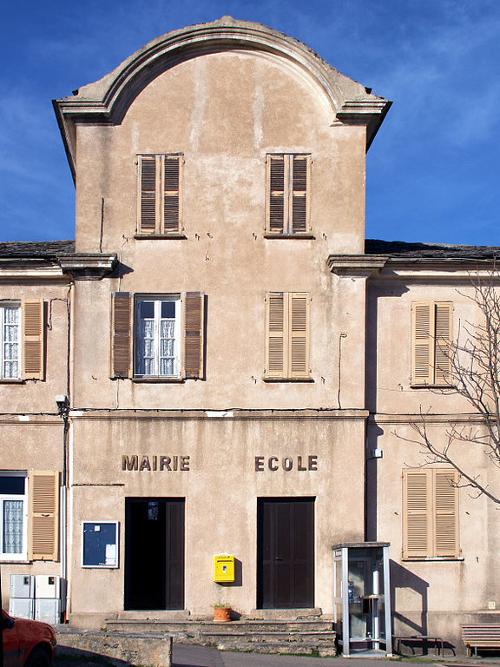 School in Croce, Castagniccia in CorsicaPhoto: Pierre Bona CC 3.0 Unported no changes made

Education is compulsory from the age of six to sixteen. Secondary education is divided into two cycles. The first cycle, from 11 to 15 years (collège), is a general training. The second cycle up to the age of 18 can be chosen between academic or vocational training. In 1765, Pascal Paoli opened the first university in Corte. However, this university was closed soon after the French arrived on the island.

It was not until 1981 that Corsica's university, Pascal Paoli University, was reopened, again in Corte. The university has about 3,500 students who can choose from the faculties of art, languages, technology, law and economics. There are a number of technical courses scattered across the island.

Of all Corsican traditions, the “vendetta” or blood feud is the best known. Especially in the 16th to the 18th century, during the Genoese rule, the Vendetta celebrated its heyday. The Genoese police did not intervene in quarrels between the Corsicans themselves, especially in the interior. They were therefore forced to settle conflicts themselves. Vendettas were mainly found in the south. In Cap Corse in the north of Corsica this tradition was not at all known.

A vendetta often arose when the family's honor was tarnished. The person who tainted the honor was murdered by the "affected" family. His family killed another member of the other family and it could go on for generations. However, there were several ways to end a vendetta. For example, some sort of peace truce or truce could be agreed between the families. The vendetta sometimes ended when there had been the same number of victims on both sides. In the period 1359 to 1729, more than 30,000 Corsicans were killed by the Vendetta. It was not until 1920 that the vendetta was banned by law.