The Côte d'Azur covers the coastal area and the hinterland between Bandol and Menton on the Italian border and is located in the departments of Var and Alpes Maritimes.

The Côte d'Azur is also often called the French Riviera, especially in English-speaking countries, but in fact it is only the eastern part of the 'Azure Coast', approximately from Nice to Menton.

The Principality of Monaco (official name: La Principauté de Monaco) is also located on the Côte d'Azur, close to the Italian border (15 km) and 18 km east of Nice. 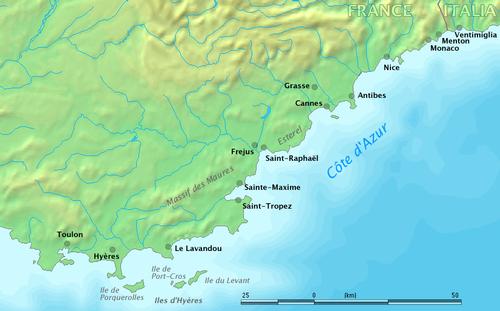 The French Riviera runs from Cannes to Menton. The Côte d'Azur covers the French Mediterranean coast and its immediate hinterland from St. Tropez to the Italian city of Ventimiglia. The name Côte d'Azur was invented by the French writer Stephen Liégard, who wrote a book in 1887 about the coastal strip he called Côte d'Azur. According to him, the Côte d'Azur ran from Hyères in the west to Menton in the east.

To this day Menton is still the end point of the Côte d'Azur. Opinions differ about the border in the west: for some the Côte d'Azur ends west of Cannes, according to others it runs at least as far as St. Tropez.

The Côte d'Azur is a region of many geographical contrasts, with forests, beaches, plateaus, mountain peaks, narrow and deep valleys.

The coast is characterised by rocks, hundreds of beaches, wide bays and capes. From the Italian border westwards, the Préalpes or Pre-Alps rise steeply from the sea. The foothills of this mountain range form rocky capes that border deep bays. Where the river Var meets the sea, this steep rocky coast comes to an abrupt end. Between Menton and the Fort Carré of Antibes, there are pebble beaches, further west are the famous sandy beaches. The longest sandy beach of the Côte d'Azur is Fréjus-Plage. West of the mouth of the Siagne, the whimsical red-coloured coast of the rather low Massif de l'Estérel (max. 618 metres high) begins. Here, the mountains and the sea continually interact: foothills and steep spires alternate with tiny bays, narrow sandbars, small beaches and "calanques" (deep valley with steep slopes and partly submerged in the sea) with perpendicular walls. After this, the coast is defined by the Massif des Maures with its dark forests. 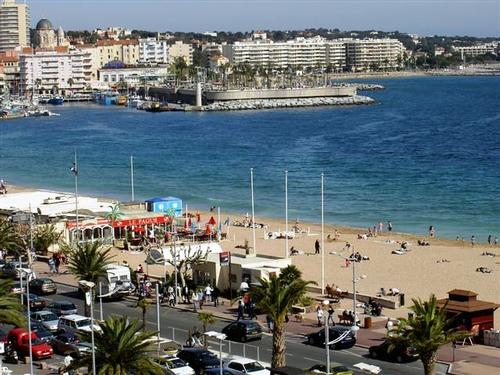 Off the coast there are thousands of rocks and islets, of which the Îles d'Hyères or Îles d'Or (largest island Île de Porquerolles 18 km2 and also the most mountainous and smallest French nature reserve Île de Port-Cros and the small rocky Île de Levant), south-east of Hyères and Le Lavandou, and the Îles de Lérins, south of Cannes, are the most interesting. The Greeks called the group of islands 'stochades', because of their location in a straight line. The Îles de Lérins are named after two saints: the southernmost St-Honorat (approx. 1.4 km2) and the very wooded St-Marguerite (2.7 km2), the largest island. Furthermore, the Côte d'Azur coast is, of course, a string of towns and villages that have grown into seaside resorts.

The hinterland of the Côte d'Azur also has a very varied landscape. In the north, the Southern Alps stretch across the entire eastern side of the Côte d'Azur. The foothills of this mountain range are the less high, woody Massif des Maures (with the 780 m high Sauvette) and the Massif de l'Estérel (with the 618 m high Mont Vinaigre). In these massifs lie the deep valleys of the Tinée, the Vésubie, the Paillon and the Roya. The region around Grasse is characterised by plateaus and mountain ranges (1100-1600 m) that are also cut through by gorges. Also the necessary waterfalls can be found here.

The Provençal Alps near Nice reach an altitude of approx. 2000 metres, and further north and north-east, the high mountains (Alpes méditerranées and Alpes de Haute-Provence, 1500-2900 m) with many lakes, forests and alpine meadows begin. Here, less than two hours drive from the Côte d'Azur, one can enjoy winter sports in all its facets.

The Côte d'Azur's hinterland offers plenty of opportunities for potholers. Interesting are the rock crevices and karst pipes of Siou Blanc (deepest karst pipe -350 m) and the Massif de Marguareis with pits over 900 m deep. The karst area around Grasse is known for its many caves. The Plateau de Caussols, from St-Vallier-de-Thiey to Gourdon, has an average height of 1000 m and is a rare example of karst relief in France. The northern part of the plateau has a landscape of fields and meadows due to its fertile soil. The southern part, on the other hand, offers a rather chaotic sight due to the presence of dolines, rock formations, chasms and karst pits. The small Massif du Tanneron, between the Lac de St-Cassien and the Siagne, resembles the Massif des Maures because of its rounded shapes and gneiss rocks. From mid-January to mid-March, this mountain massif changes into a beautiful sea of mimosa. The mimosa was imported from Australia in the 19th century and has since conquered the slopes of the Tanneron. Every year, thousands of tonnes of mimosa from the Tanneron are shipped to the rest of France and abroad.

The Gorges du Verdon and the Gorges du Loup are the most famous of the many canyon systems in the Côte d'Azur hinterland. The Loup rises at an altitude of 1300 m in the limestone rocks of the Préalpes de Grasse and has carved out the beautiful gorge on its short journey to the Mediterranean.

The Étangs de Villepey, near Fréjus, is an area of 255 ha with lakes, forests and meadows. Together with the salt pans of Hyères, this area is one of the few lagoons between Marseille and Nice. The lakes were created on dead branches of the rivers Argens and Reyran. The flora and fauna, including 21 orchid species and many migratory birds, are typical of the transition zones between fresh and salt water.

The approximately 70,000 ha Parc National du Mercantour (since 1979) stretches between Barcelonette in the north and Sospel in the south and has a contrasting landscape with lakes, river gorges, valleys and rock formations. The national park covers the valleys of the Roya, Bévèra, Vésubie, Tinée, Var, Verdon and Ubaye. The highest point is at the top of the Gélas (3143 metres).