The department of Dordogne, located in the south-west of France, was largely part of the former Périgord province before 1790 and is now part of the Aquitaine region.

The surface area of the Dordogne is 9,060 km2 (1.6% of France and 21.8% of the Aquitaine region) and it is France's largest department after Gironde and Les Landes.

Dordogne borders the Poitou-Charentes region to the east and north-east, the Limousin region to the north-east and the Midi-Pyrénées region to the south-east. The Dordogne is further bordered by the departments of Haute-Vienne, Corrèze, Lot, Lot-et-Garonne, Gironde, Charente-Maritime and Charente. A number of seven neighbouring departments is the highest in France.

The maximum distance from north to south is 126 km and from east to west 116 km. The total length of the department's borders is approximately 500 km. 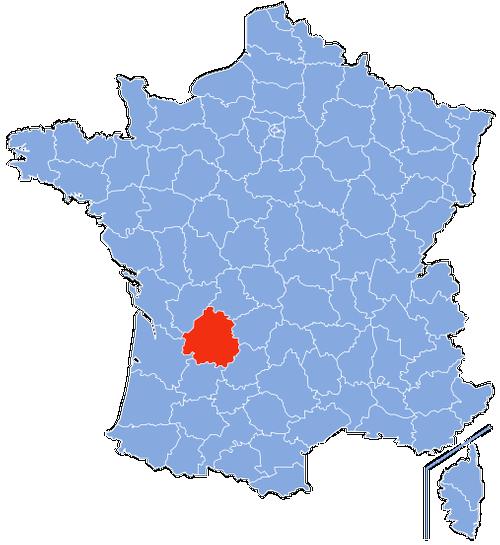 Location Dordogne in FrancePhoto: Marmelad CC 2.5 Generic no changes made

Dordogne is situated in the western foothills of the Massif Central and consists for the most part of a limestone plateau (Causse Périgordien) that reaches a thickness of several hundred metres. Shrinkage and movements of the earth have created many natural caves in the limestone crust with fantastic stalactite formations and prehistoric drawings.

The many rivers in this area, including the Dordogne, have created valleys with a very fertile silt layer, where the main economic activities, especially in the agricultural field, take place. At approximately 472 kilometres in length, the Dordogne is one of the longest rivers in France and also one of the few rivers in France that still has a largely natural course. Dordogne rises on the northern flank of the highest peak in Auvergne, Puy de Sancy (1886 m), at an altitude of 1680 metres, from the little rivers Dorde and Dogne. The two largest tributaries of the Dordogne are the Isle and the Vézère. From the Massif Central, the river flows through the departments of Puy-de-Dôme, Corrèze, Dordogne and Gironde to the Atlantic Ocean. 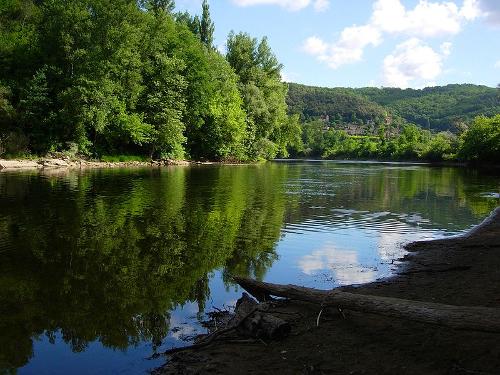 View of the DordognePhoto: Luc Viatour CC BY-SA 3.0 no changes made

The highest point in Dordogne (478 m) is in the Forêt de Vieillecour, north-west of Saint-Pierre-de-Frugie.

The department Dordogne can be divided into four tourist areas that differ a lot in terms of landscape. The northern part of the Dordogne is called the Haut-Périgord and is divided into the Périgord Blanc and the Périgord Vert. The northernmost part of the Haut-Périgord, the Nontronnais, has a rough and rainy landscape. South of it is the Causse Périgordien, a limestone plateau with rivers (a.o. the Vézère) and alternating forests, heaths and cultivated landscapes.

Furthermore, in this area we find extensive forests of summer oaks, chestnuts and maritime pines. In the west of Périgord Blanc, between the rivers Dronne and Isle La Blanc, there is a wooded area with many lakes and ponds.

This area in the north of the Dordogne with abundant rainfall, is characterized by a hilly coulisse landscape with lots of arable farming and sunflower fields and somewhat less dense forests as in the Périgord Noir.

Here lies the Ribéracois, the granary of the Dordogne. Furthermore, there are many sources, streams and rivers here. The west of the Périgord Vert is more hilly and along the rivers Dronne and Auvézère, a beautiful landscape can be found.

Here, the image is mainly determined by the many dense woods with holm and haze oaks. In the valleys one finds many farms on the silt ground.

The Périgord Noir is crossed by the Dordogne and the Vézère, which meet at Limeuil and continue as the Dordogne.

Nowhere else in the world, and especially in the Vallée de la Vézère, can one find so many caves with prehistoric paintings and engravings.

Périgord Pourpre ("Purple Périgord", named after the purple leaves of the grapevines)

The wide Dordogne, which flows through the area from east to west, has left behind a lot of silt in the valley, where arable farming is predominant. There are also many tree nurseries and vineyards on the slopes. In the south are some small hilly areas, interspersed with forests.