The Cevennes (French: Cévennes) is a region, mid-mountain range and nature reserve in the south of France. The Cévennes lie to the south of the Lozère department and to the west of the Gard department. The Cévennes forms the south-eastern end of the Massif Central to the Rhone valley and the transition between the coastal plain and the Causses (limestone plateaux) of the Languedoc. A large part of the region consists of the Parc National des Cévennes (3230 km2). The Mediterranean Sea is only about 80 km away. Cevennes on the map of FrancePhoto: Abrahami CC 3.0 Unported no changes made 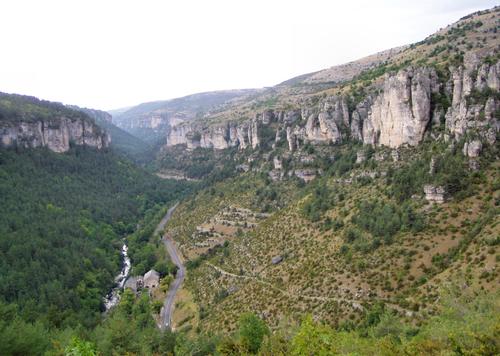 300 million years ago, the Cevennes consisted of tropical forest and marshes, which were covered over and over again by a layer of plants that eventually fermented and turned into a layer of coal of about 1 metre. This area of France was then flooded by a sea which, by means of lime deposits (shells and other shellfish), covered the coal layer. Earthquakes, the formation of the Alps and the Pyrenees and erosion caused the present landscape with mountains, hills and (deep) valleys, gorges of rivers like the Tarn, the Dourbie and the Jonte, caves (among others the spectacular Grotte des Demoiselles and the largest stalactite cave of the Cevennes: Grotte de Trabuc), forests, waterfalls and barren desert-like limestone plateaus and the karst landscape of the Grands Causses in the west of the Cevennes. Here, one also finds many caves, underground rivers and abîmes or avens, caves accessible from above.

The Cévennes consist of a series of massifs with mostly fairly flat top zones, separated from each other by deep (Gardon) valleys, the 'Cévenne des Cévennes', in which mountain rivers like the Ardèche and the Gard flow. The northern part of the Cévennes consists of the mountains of the Vivarais and the Ardèche. The south-western part consists of the Cévennes Languedociennes with the granite dome of the mighty, elongated Mont Lozère and the Mont Aìgoual (1567 m), the highest point of the southern Cévennes. In between lies the large National Park of the Cévennes (French: Parc National des Cévennes). On the side of the Rhone valley, the slopes are steep, towards the side of the Massif Central they are more gentle. In the south, they change into limestone plateaus: the Causses. The highest mountain is Mont Lozère with 1702 metres, another mountain is Gerbier de Jonc (1551 m) in the Plateau Ardèchois. The Sommet de Finiels on the ridge of the Mont Lozère measures 1699 metres, the Pic Cassini 1680 metres. 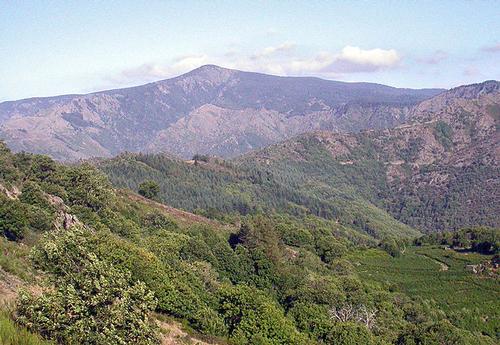 The low mountain range landscape is most dramatic in the Gorges du Tarn, one of the most impressive natural sites in France north of the Cevennes National Park. These steep mountain slopes and bare rock faces have been carved out by the River Tarn and its tributaries, which plunge from the heights of Mont Lozère.

The southern foothills, with beautiful files of mixed forest and many sweet chestnuts, are not as steep and the valleys are much wider than in the northern part of the Cévennes. This region with its elongated mountain ridges and hills is therefore very suitable for a terraced culture with vineyards, olive trees, fruit trees and mulberry trees.

The Cévennes National Park (since 1970) lies between Sévérac-le-Château, Mende, Nîmes, Montpellier and Millau. The surface area of the national park is approximately 913 km², making it the second largest of the six national parks in France.