Provence is a region in the south-east of France and borders Italy to the east, the river Rhône to the west, the Mediterranean to the south and the Baronnies and the Alps to the north. 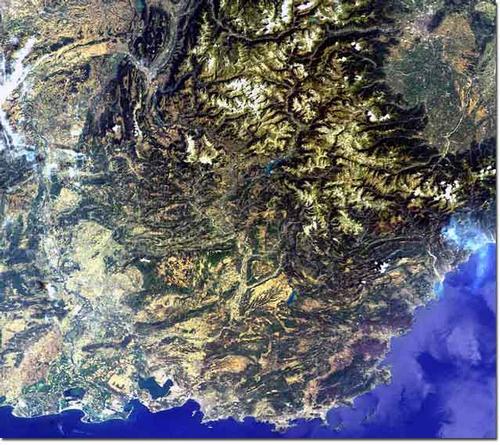 Characteristic of Provence is a Mediterranean relief landscape with plains and mountains. In the east, from Mont Ventoux to the Calanques in the south, Provence is bordered by bare mountain ranges and wooded hills. In the west are the plains of Comtat and Crau and the marshes of the Camargue.

The landscape of the different departments is unprecedentedly multiform, which is why we have chosen to describe it per department below:

The character of this still relatively untouched region (area 6944 km2 and many peaks above 2500 m) in the north of Provence can be called both Provencal and Alpine. The highest peak of the Provençal Alps is the 3050 metres high Mont Pelat. The further north you go, the more alpine (with mountain lakes, glacier valleys and alpine meadows) the landscape becomes, ending in the desolate landscape of the Massif des Ecrins. Mountain rivers like the Var, Cians and Estéron have carved wondrous shapes in this desolate landscape: the Clues de Haute-Provence. South of the Mont Pelat lies the 50 ha Lac d'Allos, the largest mountain lake in Europe at an altitude of (2228 m). Located at 780 metres and covering an area of 3000 hectares, Lac de Serre-Ponçon in the Basse-Ubaye region is the largest man-made lake in Europe. 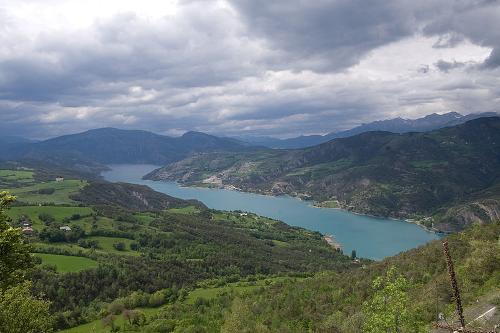 Some low mountain ranges in this area are Montagne de Lubéron, Montagne Ste-Vicroire, the Massif de la Ste-Baume and the Chaîne de l'Étoile. The bizarre rock formations of Les Pénitents des Mées are a very special geological phenomenon. The mountain range has a length of two kilometres and a height of 100 metres. The rock formations are formed by stones washed ashore and gradually transformed into cement-like pillars.

One of the most impressive natural attractions of Provence is the Grand Canyon du Verdon, where the Verdon, a tributary of the Durance, has cut a canyon up to 700 metres deep through the limestone plateau of the Plans de Provence over tens of millions of years. The gorge stretches 21 km from Aiguines to Point Sublime and is the second largest in the world after the Grand Canyon. The gorge was not fully mapped out until 1905.

This oldest part of Provence is located in the lower part of the department. In the north lies the fertile plain of La Petite Crau. This plain is cut off by the low mountain ranges of Les Alpilles and Montagnette. South of these mountain ranges lies the barren pebble desert of La Grande Crau. In the middle of the plain are grassy steps covered with pebbles and accumulated gravel, also called 'rolling stones'. These rolling stones are a remnant from the old bed of the Durance, which flowed here four million years ago, changed its course and left the rolling stones behind. In some places, the layers are up to 15 metres thick. Agriculture is only possible here through irrigation. Between the stones grow tufts of grass or 'coussouls', which the traditional merino sheep, which are bred here in particular, love.

In the westernmost part and along the coast of Provence lies the Camargue, an 85,000 ha large alluvial plain and an official nature reserve since 1928. The Camarque used to have a constantly changing landscape, but since man-made regulation of the Rhone and the construction of an outer dike, the situation has been pretty much under control. The Camargue lies exactly between two arms of the Rhone: the 'grand' Rhone that flows to the south-east, and the 'petit' Rhone that flows to the south-west. Freshwater marshes and mossy grasslands are in the north of the Camargue, saltwater lakes in the middle and south, saltwater lagoons ('sansouires') and beaches in the south. The Camargue forms a triangular delta, bounded in the east by the main arm of the Rhone, in the west by the Petit Rhone, and in the south by the Mediterranean.

The uninhabited Îles de Marseillaveyre have a wild, barren and rugged landscape. The archipelago has five main islands and several small islets with a total area of approx. 160 ha.

This rugged-looking department (6000 km2), the most wooded in Provence, located in the south and south-east, is dominated by the vast forests of the Massif des Maures. The overgrown Massif des Maures is, together with Massif de L'Estérel, the oldest mountain range of Provence and was created by volcanism.

Between the coastal cities Marseille and Cassis, there is a 28 km long area with "calanques", fjord-like bays with small beaches and steep, white-grey rock formations, which are up to 400 metres high and stand vertically in the blue water, making them the highest in France. Calanques were created by erosion that eroded the limestone over time. These limestone cliffs are all that is left of the enormous coral cliffs that grew here for millions of years. Cap Canaille near Cassis, with its 409 m, is the highest cliff in France.

Between Toulon and Fréjus are beautiful sandy beaches and off the coast is the wooded island group Îles d'Hyères (also called: Îles d'Or) with the three large islands Île de Porquerolles (7 km wide, 2 km long), Île du Levant (8 km long, 1.2 km wide) and the wild and mountainous Île de Port-Cros (2.5 km2). The islands are the summits of the Massif des Maures, which rise just above the water after a rise in sea level.

The Massif de la Sainte-Baume is the most extensive and highest mountain range in Provence, with the 1147-metre high Signal as its highest peak.

The Vaucluse, located in the north-west of Provence and one of the smallest departments in France, is surrounded by the Rhône in the west, the Durance in the south and the foothills of the Alps in the east.

The most striking parts of the Vaucluse (area 3540 km2) are the large plain Comtat Venaissin and the porous limestone plateau Plateau de Vaucluse, which is home to a vast underground system of rivers and caves.

The northern side of this plateau is dominated by the 1909-metre-high Mont Ventoux. In 1990, a large part of Mont Ventoux was designated a 'biosphere reserve' by Unesco. The 'Olympus of the Midi' with its great diversity of landscapes has two faces: the alpine climate of the north face and the Mediterranean character of the south face.

Halfway between the Mediterranean Sea and the Alps lies the Lubéron Mountains, a regional nature park also recognised by UNESCO as a biosphere reserve (165,000 ha). The mountain range is divided by the Lourmarin valley into the western Petit Lubéron and the eastern Grand Lubéron. Le Petit Lubéron is a plateau carved by ravines and gorges up to 700 metres high and overgrown with summergreen oaks, Atlas cedars, beeches and Scots pines.

Le Grand Lubéron stands out because of its broad rounded peaks that can be more than 1000 metres high and are covered with holm oak and rosemary bushes. The low rainfall gives the landscape its Mediterranean character.

The Sorgue River is known for its mysterious source, which has the largest water discharge in Europe. The exact origin of the water is still unknown.