The French region of Auvergne occupies the eastern part of the very old Massif Central (French: Massif Central), a low and middle mountain range that has lost its high peaks over millions of years due to erosion processes.

The total area of Auvergne is approximately 26,000 km2, which is 4.8% of the national territory. Auvergne is bordered by the following regions: to the north by Bourbonnais, to the east by Lyonnais and Ardèche, to the south by Rouergue and Causses and to the west by Quercy and Limousin.

The Massif Central covers a large part of Auvergne. This plateau was formed at the end of the Paleozoïcum (600-225 million years ago) and is therefore much older than the Alps or the Jura. The originally mountainous area has deteriorated over time and was further completed in the Quaternary (2 million years ago). Then the Massif Central experienced volcanic activity and many of today's volcanoes were formed. The chain of volcanoes of the Monts Dôme is much younger, having only formed between 100,000 and 5000 BC.

The only noticeable volcanic activity at the moment is the hot springs scattered around Auvergne. The last volcanic eruption appears to be in the year 4040 BC. to have been. Special in this area are the so-called ‘cirques’, deep cirques between the volcanoes.

The volcanoes of Auvergne can be divided into dome volcanoes (craterless and round), crater volcanoes (including Puy de Pariou) and volcanoes with crater (including La Vache). The Mont Bar is special, the only one in France of the Stromboli type. A peat swamp has formed in the crater of this volcano. 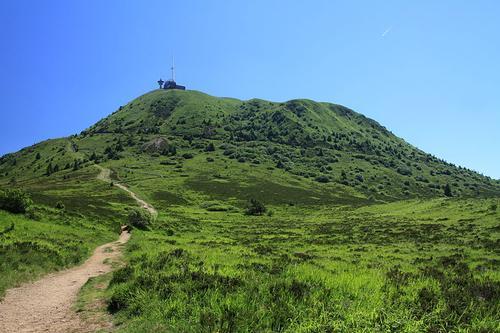 Between the volcanic massifs of the Volcans-d’ Auvergne Natural Park are the basalt plateaus of Artense and Cézallier. South of Aurillac is Châtaignerie, a region covered with chestnut trees and moors. The black soil of the Limagne is rich in alluvium and volcanic ash, and this landscape is characterized, among other things, by huge fields of corn.

The Monts du Forez is densely wooded and the granite soil of Livradois is covered with dense spruce forests. The south-east of Auvergne with its gorges and massifs is covered with congealed layers of layers that often protrude like scree cones. In the south, wild, high-lying plateaus alternate with pastures.
The ‘orgues’ (organ pipes), formed when lava masses began to shrink after solidification and broke into prism-shaped columns.
The Auvergne has several major rivers: the Allier, the Loire, the Dordogne and the Lot.