In the western part of the Ardèche people still live mainly from forestry and livestock farming. Fruit growing (and the related canning industry) is of great importance, because about 8% of the population still works in this branch of the economy. The main fruit products are peaches and apricots, but cherries, apples, plums, kiwis, berries and guyot pears also generate considerable income. The wild blueberry cultivation, good for about 400 tons per year, takes place on the acidic soil of the high plateau in the Ardèche. The slopes of the Eyrieux valley, from Beauchastel to Saint-Sauveur-en-Montagut, are the peach country of France. This valley has the near perfect conditions in terms of soil and climate for growing peaches. In recent decades, the number of growers has fallen sharply and other types of fruit are also being grown.
South of Les Vans there are large olive groves and one of the two (olive) oil mills from the Ardèche are still in operation. Fruit and vegetables are canned in Annonay, Privas, Aubenas and Viviers.

The traditional silk production of the 19th century has disappeared, but a few textile factories have remained. Other branches of industry that can be found are paper manufacture, shoes, pharmaceutical factories and the automotive industry. With 220,000 ha of forests, the Ardèche is still one of the most wooded areas in all of France. The wood exploitation of the pine forests of the Haut-Vivarais is a source of income. The town of Aubenas is the economic heart of the Ardèche. 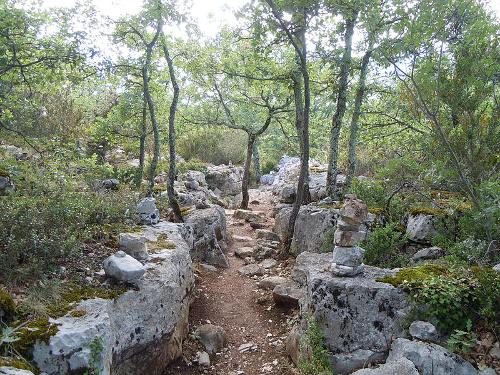 The Ardèche is still one of the most forested areas in FrancePhoto: Patrice78500 CC 3.0 Unported no changes made

Livestock farming and its products are still an important source of income for the Ardèche. Besides cows, goats and sheep are especially important for the Ardèche. The Ardèche has one of the largest goats in France and is what produce goat cheese, including the 'caillédoux' from Saint-Félicien, the number één of France. Although sheep farming is struggling, there are still many flocks of sheep around in the Ardèche. As far as cheese is concerned, the Ardèche is distinguished by the picodon made from full-fat goat's milk and the coucouron and coudoulet made from cow's milk.

Important for the economy is viticulture and especially tourism. Most of the vineyards are located to the east of the Ardèche, and the most famous are those of Saint-Péray, Saint-Joseph, Côtes du Vivarais and Cornas. Special is the wine, 'Poire Williams', which is made from the sweet, yellow pear in the valley of the Rhône. 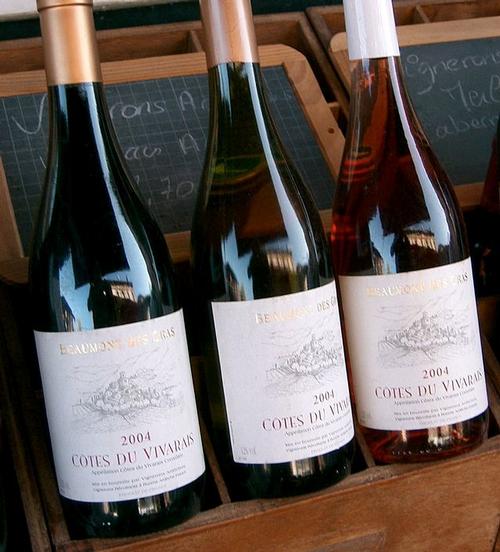 Chestnut culture was at its peak at the end of the 19th century with more than 60,000 hectares of chestnut trees, also known as 'bread trees'. At the moment, less than 10,0000 ha of that area is left, and only half of it is still used for (sweet) chestnut cultivation. As far as France is concerned, the Ardèche produces about half of the total French production, the Ardèche is still in the first place with a production of between 4000 and 5000 tonnes, but many companies source the basic product from countries such as Italy, Portugal and Spain.
Chestnuts can be processed into jam, pie, purée, ragout, soup, liqueur (center is Saint-Désirat), beer (Vals-les-Bains) and as the pinnacle of delicacy the met flavored sugar syrup candied chestnut and the chestnut puree 'créme de marrons'. The capital of the Ardèche, Privas, is also known as the capital of the candied chestnuts or 'marrons glacés', in particular of the well-known brand Cléent Faugier (since 1885). In the valley of the Glueyre there are more than 300 ha of chestnut forestsand the Parc Naturel Régional des Monts d'Ardèche is also entirely devoted to the sweet chestnut. The village of Saint-Pierreville is also a center for chestnut cultivation, with chestnut trees as far as the eye can see.

In the 17th century, the Ardèche and the Cevennes were the largest silk producer in Europe. From the once flourishing production of silk cocoons (sériciculture) and worked silk thread, however, only the twisting of silk thread through twines or 'moulinages' remains in the Ardèche, where two or more silk threads are twisted together. In the 19th century, the village of Largentière, from the 10th to the 15th century a silver mine (in fact silver-containing lead) was exploited here, long the largest silk producer in the Ardèche.
The Haut- Vivarais was the cradle of the French paper industry in the 17th century and in 1777 Etienne de Montgolfier, son of the renowned paper producer in the Ardèche, Pierre Montgolfier (1700-1793), managed to produce the first sheets of paper without annoying irregularities. to produce. More than 1000 people are currently employed in the paper sector.

Tourism is playing an increasingly important role. The low countries play a leading role, more than 70 percent of foreign guests come from the Netherlands and Belgium.

Furthermore, many people still find work in craft trades and in the arts and crafts. Pottery in particular is still a tradition that is kept alive in the Ardèche, with the centers of Saint-Dé sirat, Saint-Laurent-du-Pape, Salavas and Toulaud.
Most jewelry made in France brands such as Oslo, Nina Ricci and Kenzo come from artists who have settled on the Boutères massif, between the towns of Le Cheylard, which is also economically driven by textile production, and Saint-Martin-de-Valamas.