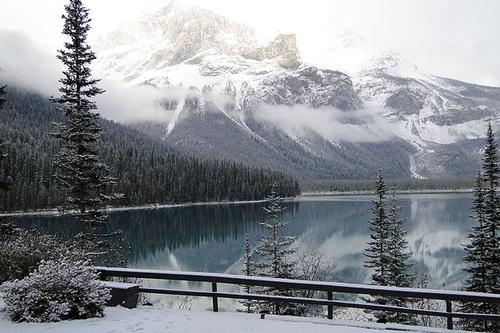 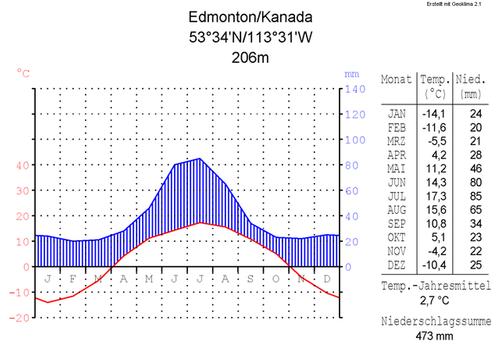 Due to Alberta's northern location, the province is located in a cool temperate climate zone, and due to the absence of a moderating influence from the ocean, it has a continental climate. As a result, it cools down quickly and heats up quickly. Alberta has cold, snowy winters and relatively short, dry and warm summers. Northern Alberta has a sub-arctic climate.

But the main factors determining the height of temperature and the amount of precipitation are the height and width of the Rocky Mountains and the direction of the prevailing winds. The mountain ranges intercept moist air from the Pacific Ocean and cause a decrease in precipitation. For this reason, the eastern slopes of the Rocky Mountains are in rain shadow and the skies over Alberta are generally clear. The weather in the Rocky Mountains can change rapidly within a day from a sunny winter day with freezing temperatures to bitter cold, strong winds and snowfall. Precipitation levels throughout the province are quite limited, ranging from about 300mm per year in the southeast to 400-450mm in the north, with the exception of the foothills of the Rocky Mountains, where rainfall is 550-600mm per year. In Edmonton an average of 460 mm falls per year. About half of all precipitation falls in the period June to August. Calgary has a 56% chance of a White Christmas, Edmonton is quite snow sure at Christmas (86%).

The dry clear air provides the people of Alberta with plenty of sunshine, ranging from 1,900 hours in the north to 2,300 hours a year in southern Lethbridge, more than anywhere else in Canada. Calgary is the sunniest city in Canada with an average of 333 days of sunshine per year. After that comes Medicine Hat with an average of 330 days of sunshine. Toronto, a lot further east, has 'only' 303 days of sunshine a year. Northern Alberta receives approximately eighteen hours of daylight during the summer period. The influence of the Pacific air masses diminishes in eastern Alberta, making way for continental air masses from the Arctic and the midwestern United States.

The ‘chinook’ is a powerful föhn wind that descends from the mountains and blows from the west. During a chinook, the temperature can shoot up to 20°C in the middle of winter in a short time, while recently it was tens of degrees below zero. The region around Lethbridge, in southern Alberta, has the most 'chinook days' per year, about 30-35.

Another climatic phenomenon are the 'Alberta clippers', low pressure areas that rise above the Alberta prairies and carry very cold, generally dry air. Due to strong winds, the temperature can drop to around -40°C.

Alberta is also regularly hit by very severe thunderstorms and tornadoes, particularly in the South and Central Alberta. In 1987 Edmonton was hit by a tornado, in 2000 the area around Pine Lake was hit. In total, several dozen people were killed in these tornadoes. Hailstorm Alley is an area regularly hit by heavy hailstorms, running from Calgary to Red Deer and Edmonton.

Waterton Lakes National Park is the windiest place in all of Canada. The average daily wind speed is around 30 km/h, speeds of 100 km/h are quite normal in this area.

This particular climatic condition occurs mainly around Pincher Creek, Crowsnest Pass and Lethbridge, but Calgary is also regularly affected by the Chinook. Red Deer, which is still more to the north of Calgary, also has to do with the chinook, up to, but that is very exceptional, even Grande Prairie in the west of the province. 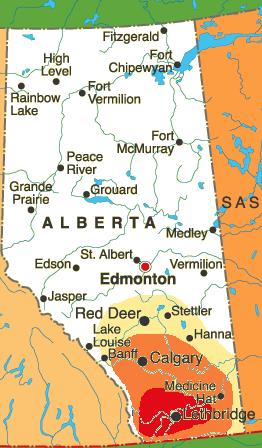 Area in Alberta where the chinook is most commonPhoto: Giftagger CC 3.0 no changes made