Forested New Brunswick covers almost 75,000 km2 and is the easternmost and largest of the Atlantic maritime provinces. The province is bordered to the north by Chaleur Bay and the province of Quebec; to the east by the Gulf of St. Lawrence, the Northumberland Strait and the province of Nova Scotia; to the south by Fundy Bay; to the west by the US state of Maine. 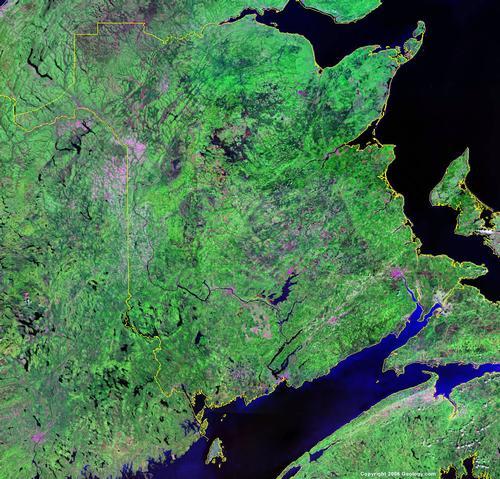 Part of the seashore has dangerous cliffs and rocky shores. The coast also consists of dunes, sandy beaches and saltwater marshes. Furthermore, the province consists of agricultural areas and a mountainous interior with impenetrable forests.

New Brunswick is surrounded by water on three sides (2400 km coastline) and has to deal with large tidal differences. The tides at Fundy Bay near Aukac are among the highest in the world with a difference between low and high tide of ten to sixteen metres. The tide line is characterised by rugged seaweed-covered cliffs, caves and steep rock formations. The action of the water has created rock formations in the shape of flower pots in Rocky Provincial Park. Twice a day, more than 100 billion tonnes of water wash in and out of the bay, the so-called 'tidal bore'. 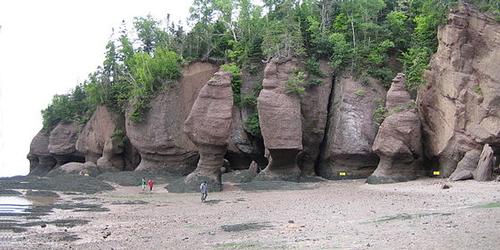 New Brunswick has hot summers and cold winters. January is the coldest month and July the warmest. Along the Fundy coast the temperature in summer is between 20 and 22°C. These temperatures are already reached around eleven o'clock in the morning. After that, the sea breeze picks up and the temperature drops considerably.

Inland, the influence of the sea gradually diminishes and temperatures in summer rise to over 25°C, occasionally to about 35°C. The highest temperature ever recorded was in 1935, 39.4°C.

In winter, temperatures drop considerably, from an average of -12.2°C in January in Edmunston, to -7.5°C along the southeast coast. In the northwest, temperatures of more than -30°C are no exception. The lowest temperature ever recorded in this province was -47.2°C near Plaster Rock in 1955.

In terms of winter temperatures, it is noteworthy that they can vary greatly from day to day. This is due to the varied, rapidly passing weather systems every two or three days.

New Brunswick is the snowiest Maritime province. Between 300 and 400 cm of snow falls annually in the northwest, and between 200 and 300 cm in the east and south. In the northwest, snow lasts an average of 160 days. Spring and early summer are the driest periods, but the growing season sees a lot of precipitation. Inland, in the higher areas, 1200 mm per year fall, especially during the summer period. Elsewhere in the province, the average annual rainfall is about 1000 mm.

Thunderstorms with strong winds occur about 10-20 days per year throughout New Brunswick. Tornadoes are rare and cause little damage. Storms caused by low-pressure areas passing over may occur throughout the year, but more frequently in the winter period. These storms are often accompanied by a lot of rain or snow. Black ice is common on around 12 days a year.

Summer and autumn storms are common in Fundy Bay and the northeast. New Brunswick is home to some of the sunniest places in Atlantic Canada: Chatham records an average of 2,000 hours of sunshine annually, St. John's has almost 100 hours of sunshine in December, more than anywhere else in eastern Canada. In July, however, St. John has the lowest number of sunshine hours in all of Canada! On average, all of New Brunswick has 75 sunless days and between 140-160 sunny days.

Fundy Bay is one of the foggiest areas in the world. Due to the large contrast between the sea temperature and the overhanging air, it is foggy in St. John approximately 90 days a year, in July even about ten days.

Fundy Bay is very rich in nutrients and therefore attracts the world's largest population of whales, including humpbacks, minke whales, fin whales and even the rare northern capercaillie, as well as birds such as fulmars, shearwaters and gulls.

Most of the territory of Fundy National Park is forested with spruce, pine, maple and beech trees. Wildlife includes elk, hare, beaver, red squirrel and raccoon.

The dunes at Bouctouche offer protection to rare plants, fragile marshland and a plover species in danger of extinction.