Ontario is Canada's southernmost province and its second largest with over one million km2. Ontario is bounded on the north by Hudson Bay and James Bay, on the east by Quebec, on the south by the St. Lawrence River, Lake Ontario, the US states of New York, Ohio and Michigan, Lake Erie, Lake Huron, Lake Superior, and on the west by the province of Manitoba. From east to west the greatest distance is 1690 kilometres and from east to west 1610 kilometres. 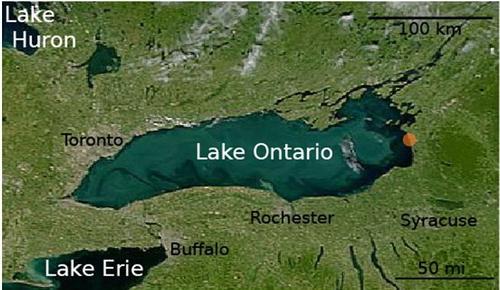 In the south of this province are the great lakes Lake Superior, Huron, Michigan, Erie and Ontario, which are connected by the great rivers St. Lawrence, Niagara, Ottawa and Rideau. 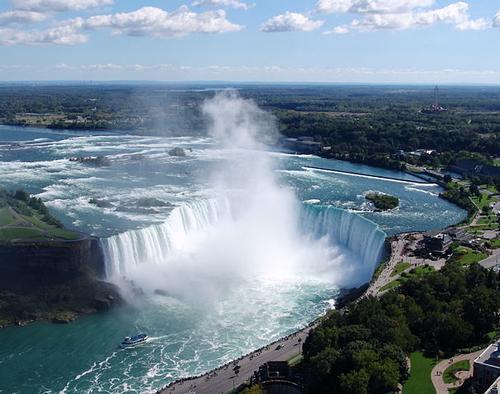 The uninhabited north of Ontario, Algoma land, is an area of forests, waterfalls, ravines and mountains. In the Sudbury Basin, located in the landscape of the northern Canadian Shield, is a deposit of many metals and minerals, including gold, silver, platinum, cobalt and especially nickel.

In the St. Lawrence River are the Thousand Islands, an area with more than 1,000 islands. The island of Prince Edward County has 25-metre-high dunes of fine sand; they are considered one of the most important freshwater dune areas in the world.

The Algonquin Provincial Park is the oldest and most famous park in Ontario, covering 7725 km2 of pristine nature and over 1000 lakes. Manitoulin Island lies just off the north shore of Lake Huron and is the largest island in a lake in the world, covering 2800 km2.

St. Lawrence Islands National Park lies in the river of the same name, where it forms the border with New York State. The park consists of 18 forested islands and some eighty rocky islets.

Important rivers in Ontario are the Abitibi, the Albany, the Attawapiskat, the Montreal, the Moose, the Niagara, the Ottawa, the Thames, the Trent and the Winisk.

Southern Ontario has a humid climate with long, hot summers and mild winters due to the moderating influence of the Great Lakes.

The north of the province has cold winters and sunny, warm summers with cool nights.

The average annual temperature ranges from 2-3 °C in the south to about -4 °C in the far north of the province. Several locations share the record for maximum temperature, 42.2°C (Atikokan, Fort Frances and Biscotasing). In the south, summer temperatures of over 35°C are no exception.

On the other side of the thermometer are places like Central Patricia, Hornepayne, White River and Geraldton with minima below -50°C. Iroquois Falls holds the record with -58.3°C.

More precipitation falls in Ontario than in the western states. Annual rainfall in the eastern part of the province is around 800 mm. Precipitation is distributed throughout the year. Around Hudson Bay, with 1700 hours of sunshine annually, it is less sunny due to the easy formation of fog and low-hanging clouds.

The amount of precipitation varies greatly from year to year and from place to place. In general, the amounts of precipitation increase from the northwest to the southeast. For example, the Big Trout Lake area receives about 600 mm of precipitation per year, the Marathon/White River region about 900 mm and Thunder Bay just over 700 mm. Most precipitation falls in the months of May to September. Periods of prolonged drought are rare. Winters with more than 400 cm of snow in some areas are quite normal. Searchmount, east of Lake Superior, easily reaches 430 cm.

Thunder Bay is the sunniest place in Ontario and even in all of Eastern Canada with just over 2200 hours of sunshine per year.

Toronto is located fairly south and is influenced by the lakes in the area, so the average temperatures are not too bad. In winter, Toronto usually has a thin layer of snow and temperatures drop to an average of 10 degrees below zero; in summer, daily temperatures are around 27°C, making Toronto one of the hottest places in Canada, along with Montreal in the province of Quebec.

Ontario has a fair number of national parks. Point Pelee NP is a piece of land that juts out into Lake Erie. It is the southernmost point of Canada, but it is a park because this mixture of beaches, forests, lakes and marshes is home to thousands of migrating birds each year. Bruce Peninsula NP and Fathom Five National Marine Park lie on the land finger that separates Lake Huron and Georgian Bay. It is a landscape of rocks, full of caves and covered with forests where orchids also grow.

Algonquin is the oldest and most famous park in Ontario. Here you can meet beavers, moose, reindeer, wolves and bears. In the south of the park runs Highway 60. If you drive there, there is a very good chance that you will see several moose. Algonquin is also very attractive for fishermen. It is teeming with salmon trout and bass!