Saskatchewan is one of the prairie provinces, is flat and characterised by many forests, lakes and endless cornfields, which provide much of Canada's grain and bread production.

The province covers a total area of almost 650,000 km2 and the Saskatchewan River flows through it. Saskatchewan is bordered to the north by the Northwest Territories, to the east by Manitoba, to the south by the US states of North Dakota and Montana and to the west by Alberta, with the greatest length from north to south being 1124 kilometres and from east to west 632 kilometres.

The north is flat, virtually uninhabited and is part of the Canadian Shield. The Cypress Hills are the highest point of the province at 1386 metres. Prince Albert Provincial Park contains about 10,000 lakes. Here you can also see the transition from southern to northern Canada. The southern part consists of birch forests and prairie, the northern part is wetter, with lakes, pines and firs, the beginning of the gigantic forests of Northern Canada. In the south-west is the Cypress Hills Provincial Park, a mountain range 1389 metres high in a desert-like environment with many dunes and sand creeks. From Diefenbaker Lakes to the eastern border of the province, there is only flat prairie land.

In the south-west of the province is Grasslands National Park, with one of the last authentic grasslands in North America. Temperatures in the park vary widely, from 40°C in summer to -40°C in winter.

Just north of Regina, the Qu'Appelle River valley is attractive. The river separates the flat prairies in the south from the more hilly grassland north of the river. Important rivers are also the Churchill River, the North Saskatchewan River and the South Saskatchewan River.

The water of Little Manitou Lake is five times saltier than ocean water. 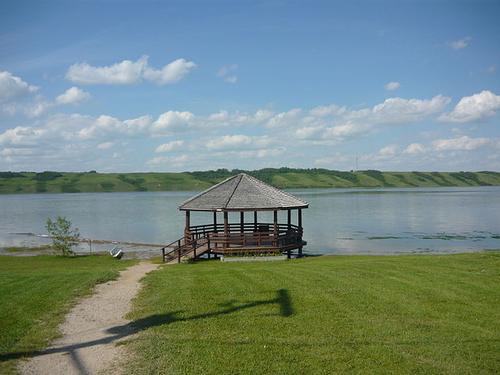 Saskatchewan has an extreme continental climate that is not influenced by seas or oceans. In the boreal north this is accompanied by cool summers, in the southern prairie climate by warm summers. Due to the large temperature differences in winter and summer, the average annual temperature ranges from 3.5°C in the north to 7.0°C in the south, near the border with the United States.

Saskatchewan is one of the provinces with the least rainfall and most sunshine hours. The south of Saskatchewan has 2300 hours of sunshine per year. In winter, temperatures can drop to as low as -50°C, while in the short summers, temperatures climb back up to 30°C with peaks of 40°C in the south of the province. Normally, the daytime values during the summer months are between 22 and 25°C. Due to these large temperature differences, the average annual temperature is lower than anywhere else in the world at the same geographical latitude.

Precipitation is scarce in both the north and south, although even less in the prairie region than in the northern arctic. The air from the Pacific is already dry when it arrives in Saskatchewan. The air from other directions is also dry. As a result, Saskatchewan not only has little precipitation, but also a lot of sunshine. Estevan is the 'Sunshine Capital' of Canada with an average of 2540 sun hours per year.

A description of the climate in Saskatchewan would not be complete without the 'blizzards', prairie storms that last for about six hours and often occur in February. Public life is often disrupted then.

Grasslands National Park, a mixed-grass prairie (over forty species), is home to many rare species, including the short-tailed lizard, a number of raptor species, ground squirrels, forked antelope, mule deer, rabbit owls and Canada's only colony of black-tailed prairie dogs. The Frenchman River valley is the last remaining habitat of the black-tailed prairie dog in Canada. The Cypress Hills Interprovincial Park is home to moose, wapitias and white-tailed deer, as well as over 200 species of migratory birds, including the rare trumpeter swan and rock ptarmigan.

The southern part of Prince Albert National Park is a park landscape with aspen, intersected by strips of prairie grass: ground squirrels and a herd of prairie bison live here. In the northern part, the park landscape changes into a boreal forest of spruce, American larch and pine - the habitat of wolves, black bears, otters and foxes. The beaver population has recovered well in recent years.

To protect the white pelicans, Lavallée Lake is no longer accessible.

The plant symbol of Saskatchewan is the prairie lily.