Nova Scotia is one of the Maritime Provinces, a peninsula of over 55,000 km2. Part of Nova Scotia, Cape Breton, is an island, separated from the rest of the province by the Strait of Canso. The rest is connected to the mainland by the Chignecto isthmus. 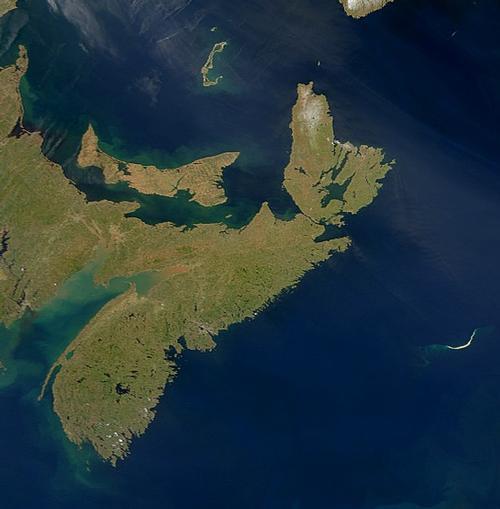 The province is hilly and forms the northern end of the Appalachian Mountains. The coastline is rocky with many coves and islets. Inland there are 400 lakes.

Central Nova Scotia covers the coastline along the Northumberland Strait, where there are many beaches with warm seawater. The coast of the Minas Basin has one of the highest tides in the world with a difference of 15 metres between low and high tide in some places.

Dartmouth is a city with no less than four hundred lakes and ponds within its borders. The 330-kilometre Lighthouse Route runs along bays, inlets and fjords. Kejimkujik National Park is a reserve with beaches, low tides, salt banks, green forests and lagoons. The town of Amherst overlooks the largest wetland in the world, Tantramar. Cape Breton, Nova Scotia's largest island, is one of the most impressive in Canada in terms of natural beauty. The park stretches across the entire width of the tip of the island. Between the two coasts lies a highland plateau of forests, lakes, marshes and river valleys. 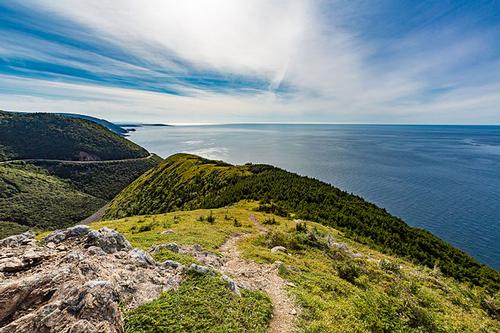 Halifax is the capital and the largest city of the province, situated on a huge seaport that is ice-free all year round. Its twin town Darmouth lies on the other side of the bay; the two towns are connected by two suspension bridges.

Nova Scotia's maritime climate is of course strongly influenced by the St. Lawrence Gulf in the north, Fundy Bay in the west and the Atlantic Ocean in the south and west.

The waters of the Atlantic Ocean and Fundy Bay are relatively cold (8-12°C), keeping the southwest cool in summer. In January, the temperature is tempered by the same water. The east, south and south-east have to deal with the Warm Gulf Stream (16°C). From January to March, the waters of the St. Lawrence Gulf and the Straits of Northumberland are covered with ice.

Along the coast, the temperature in January averages -4 to -6°C. Summers are relatively cool, around 20°C along the coast and up to 25°C inland.

Precipitation is slightly more frequent in late autumn and early winter. Approximately 15% of all precipitation in Nova Scotia falls as snow, on Cape Breton Island 30%. Along the warm Atlantic coast and around Fundy Bay, a total of about 150 cm falls in winter, inland about 250 cm. The higher areas such as the Cobequid Mountains and the Cape Breton Highlands receive more than 300 cm of snow per year. The snow periods (period with more than 2.5 cm of snow) vary considerably: 110 days along the south coast and 140 days inland.

Halifax has a justifiable reputation as a foggy city. Halifax International Airport has about 122 foggy days per year. Other 'foggy' cities are Yarmouth (118 days), Canso (115) and Sydney (80). The period from mid-spring to the beginning of summer is the most foggy.

Digby is the fishing town where the main catch is the scallop. The coastal waters of Long Island and Brier Island are rich in fin whales, minke whales, humpback whales and the rare northern right whale.

Cape Smokey and Tern Rock, on the Middle Head headland, is a breeding ground for common terns and arctic terns.