The largest province in Canada is Quebec with approximately 1.5 million km2. Québec is bordered to the north by Hudson Strait, Ungava Bay and the Atlantic Ocean, to the east by the province of Newfoundland, to the south by the Gulf of St. Lawrence, the province of New Brunswick and the American states of Maine, New Hampshire, Vermont and New York, and to the west by the province of Ontario, James Bay and Hudson Bay. The greatest distance from east to west is 1570 kilometres and from north to south 1970 kilometres. 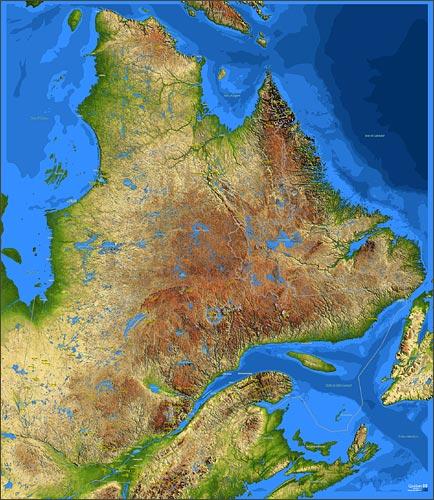 Approximately 90% of the province belongs to the Canadian Shield. Half of the province consists of extensive (maple) forests, tundra, lakes and rivers. Quebec is so long that the northern part lies in the polar region and is part of the eternally frozen Canadian Shield. The highest points are in the south with Laurentides Park at 1100 metres and Mont Tremblant at 960 metres.

The northern Gaspé Peninsula, popularly known as La Gaspésie, is 240 kilometres long and lies at the mouth of the St. Lawrence River (French: Fleuve St. Laurent) and the Gulf of St. Lawrence. It is a rough area with forested mountain ridges of the Monts Chic-Choc, with the highest peaks Mont Richardson (1173 metres) and Mont Jacques Cartier (1268 metres), and the Torngat Mountains with Quebec's highest mountain, Mont D'Iberville (1652 metres).

The Laurentians are a part of the Canadian Shield whose hilly area of the Saint Laurent Lowlands contains many lakes and mountains. The highest mountain in the Laurentians is Mont Tremblant at 978 metres.

The Saint Lawrence Seaway (completed in 1959), which connects Canada's main industrial area (Ontario) with the Atlantic Ocean, is the most heavily used inland waterway for transportation and of great importance to the economy. At 553 kilometres, the Seaway is the longest inland waterway in the world. Other important rivers are the Ottawa, the Saint Maurice, the Saguenay and the George River.

The maple forests turn a beautiful red and orange in the autumn; in the spring, the famous 'maple syrup' is harvested. The maple leaf is Canada's national symbol and has also been on its flag since 1965.

Chute Montmorency is the most famous waterfall in Quebec, higher than Niagara Falls at 86 metres. The Charlevoix coast is a UNESCO World Biosphere Reserve because of the boreal (northern or arctic) forest that grows here. Nearby is the Jardin des Grands Jardins with a complex of lakes and an evergreen taiga forest.

Central Quebec is characterised by a rocky, spruce-covered wilderness. In 1984, the islands of the Mingan Archipelago became Canada's first national island park. The islands are known for their bizarre limestone monoliths, which are shaped like flower pots.

Near Charlevoix, 350 million years ago, a meteorite with a diameter of more than two kilometres hit the island. In less than a minute, it formed a crater 5 kilometres deep and 55 kilometres in diameter, making the crater of Charlevoix one of the largest on earth.

Québec has warm summers, but spring and autumn are the best period to visit Québec. Winters in Quebec can be very cold, especially in the unspoilt countryside in the east, where even ice storms can occur.

Most precipitation falls in summer, but only a few dozen millimetres fall in winter, usually in the form of snow. The average annual rainfall is between 400 and 500 millimetres.

Further south, at the same latitude as the central Netherlands, the average maximum winter temperature is 10°C below zero. Precipitation here is significantly higher than in the north, about 800 mm per year.

Montreal lies far inland and clearly benefits from its southern location with average maximum daytime temperatures of 26.4°C in summer.

The forty islands are ecologically unique: due to the cold waters of the Labrador Current, the harshness of the winter and the limestone soil, an arctic-alpine flora grows here much more south than usual, of which some species, such as the Mingan thistle, is very rare or even unique.

In the estuary near Tadoussac lives a colony of belugas or white dolphins, accompanied in summer by minke whales, humpback whales and blue whales. The Ile du Corossol is a bird reserve with gulls, terns and puffins. Grey and common seals and harp seals often gather in the bays of the Mingan Archipelago Wildlife Park.

At the end of the 19th century, a herd of white-tailed or Virginia deer was introduced on the Ile d'Anticoste, which has now grown to about 120,000 individuals. In the game reserve La Vérendrye live large numbers of elk, beaver, deer and bear. You can fish for American zander, pike, lake trout and perch. Île Bonaventura near Percé has the largest colony of gannets in the world with more than 50,000 specimens.

The national bird of Quebec is the snowy owl.