The total area of Nunavut, including all water areas, is 1,982,182 km2, which is more than one fifth of the area of all of Canada. On 1 April 1999, Canada's newest territory became a reality: the Inuit nation of Nunavut. Location Nunavut in CanadaPhoto: TUBS CC BY-SA 2.5 no changes made

On the coast near the Beaufort Sea, there is a famous series of pingos or frost heaps, which were formed by the ground being pushed up under pressure from ice underneath. The pingoes of the Mackenzie Delta, the largest of which are 40 metres high and 300 metres in diameter at the base, are among the most impressive in the entire Arctic.

At Summit Lake, enormous perpendicular walls of Mount Asgard can be seen. Mount Thor even has the highest unbroken rock face on earth. 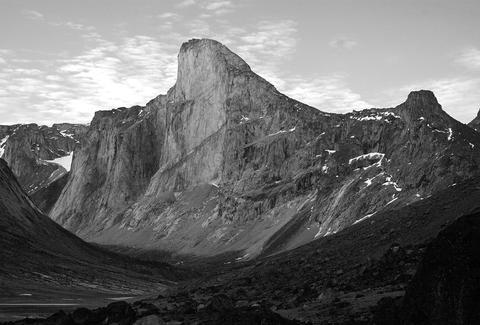 Nunavut has a tundra climate. The tree line separates it from the continental climate of the Northwest Territories. This tree line also runs approximately parallel to the permafrost line.

In winter, Nunavut experiences freezing temperatures between 30 and 40°C, and in summer the temperature rises to 11°C in the south. On average, there is a frost-free period of about 50 days, but sub-zero temperatures remain possible every day. The city of Eureka has an average of 271 ice days per year, Alert even about 287 per year (the temperature does not rise above freezing during the day). Most snow falls in October and November, and for about eight months the ground is covered with snow in Nunavut.

Most precipitation falls in summer in the form of sleet and rain. In the south the amounts are about 400 mm per year, in the northern tundra around Eureka only about 68 mm per year.

It is worth noting that Alert has an average of 0.03 thunderstorm days per year, which means that in the last thirty years there has only been one thunderstorm.

Of the more than 4,000 animal species on Earth, fewer than 50 live all or part of their lives in the Arctic, and only 31 of these in the Canadian Arctic.

Most of the polar animals in Canada are rodents that live near the tree line or on the tundra. Better known are the large animals that most people associate with the Arctic, such as polar bears, musk oxen and wolves. Most birds in this area fly to warmer areas when winter sets in. Shorebirds include the snowy owl and the snow grouse.

A bird sanctuary has been set up on Bylot Island to protect the cliffs where 300,000 thick-billed guillemots and 80,000 kittiwakes breed. In the waters of Pond Inlet live walruses, belugas, bowhead whales, narwhal, orcas, different kinds of seals and polar bears.