The province of Newfoundland includes not only the island of Newfoundland (112,300 km2), but also the much larger Labrador (300,000 km2) on the mainland. The distance between the northernmost tip of Labrador, Cape Chidley, and the south-eastern part of Newfoundland, Cape Pine, is about 1,800 kilometres. 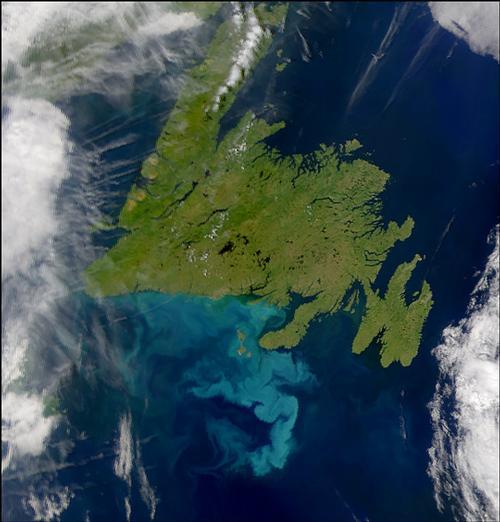 Newfoundland & Labrador is Canada's easternmost province with wild open spaces, high peaks and vast landscapes. The province consists of the island of Newfoundland and the larger mainland area of Labrador. The two parts are separated by the fifteen-kilometre-wide strait of Belle-Isle. The surface area of this province is just over 400,000 km2.

The 25,000-kilometre-long coast is rocky with cliffs, fjords and inlets. In the sea to the east and south is the large continental shelf Grand Banks, the richest fishing area in the world. This is due to the fusion of the cool Labrador Current and the warm Atlantic Gulf Stream. The landscape of Newfoundland & Labrador consists of semi-polar tundra and mountains in northern Labrador to prairies, low mountains, dense forests and rugged rocky outcrops along the coasts in eastern Newfoundland. The central plateau is a huge area of forest, crossed by a number of rivers, the largest of which are the Humber, the Exploits and the Gander. The highest points, up to 814 metres above sea level, are in the western part of Newfoundland.

The Gros Morne National Park, a World Heritage Area, contains spectacular fjords, high cliffs and waterfalls. The coastal mountain range is among the oldest in the world. The Long Range Mountains consist of mountainous tundra covered with polar alpine flora. At Shallow Bay along the Green Gardens Trail are beaches and dunes.

The treeless Torngat Mountains (area 30,067 km2, length ca. 300 km) are for 56% in Quebec and for 44% in Labrador. Less than 1% is located on Killiniq Island, Nunavut, and about 2% of the mountain range is completely under water. The highest point is Mount Caubvick or Mont d'Ilberville (1652 m). 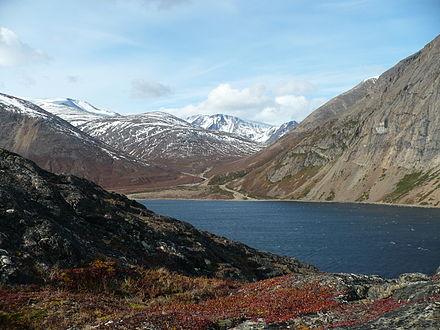 The name of the vast Labrador Peninsula comes from the Portuguese Corte Real, who referred to the relatively fertile area as 'terra de laborador'. It forms the extreme north-east of the North American continent, between Hudson Bay in the west, Hudson Strait and Ungava Bay in the north-east, and Belle Isle Strait and St Lawrence Bay in the south. Most of the country is a plateau, 300-700 metres above sea level, with glacial relief and dotted with countless lakes. It forms an important part of the Canadian Shield.

Off the coast, at the bottom of Newfoundland, are two islets belonging to France, St. Pierre and Miquelon. They are the last remnants of the French empire in North America. About 6000 people live there and they have one representative in the French Parliament.

Newfoundland & Labrador have a varied climate, although the climate is generally colder than in the other provinces on the east coast. Newfoundland has a temperate maritime climate while Labrador has a cold and dry continental climate. The east and south coasts of Newfoundland are often foggy. The normal fog in Newfoundland is often so heavy that, despite a strong wind, the fog lingers. Another fog phenomenon is the so-called arctic sea smoke, supersaturated cold air in which condensation occurs. This fog layer can reach a thickness of several metres and is very common. Fog at very low temperatures is called ice fog.

Despite its location by the sea, the weather in winter can vary greatly from day to day. Fierce cold spells alternate with short thawing periods and this is usually accompanied by heavy snowfall (tens of centimetres in a short time), black ice and strong winds, often even blizzards. There is almost twice as much precipitation annually as in the Netherlands, in the coastal area of Newfoundland often in the form of black ice. Black ice disasters are no exception in Newfoundland. Black ice with high winds is known as an ice-storm.

In Gros Morne National Park, there is a narrow plain of mixed forest and marsh where orchids and pitcher plants, the provincial flower of Newfoundland, flourish.

At the southern end of the Avalon Peninsula lies Cape St. Mary's Ecological Reserve, the province's only seabird breeding colony, which includes approximately 8,000 gannets. The islands of the Witless Bay Ecological Reserve are home to countless seagulls, razorbills, guillemots, kittiwakes and, above all, many puffins, one of the symbols of Newfoundland.

The Wets-Labrador wilderness is home to the 700,000 caribou of the George River herd.

The vast coniferous forests are home to furry animals such as fox, mink, beaver, squirrel and otter, as well as lynx, moose and black bear. The rivers are full of salmon and trout.